The Vale Hotel and Grand Opera House are two of the city's most significant landmarks. The opera house was built in 1896 and the hotel was erected next to it in 1908. The hotel, which also included a bank, is a fine example of Romanesque architecture; the former opera house is a simple two-story building designed in the Italianate style and was originally called the Grand Central Saloon. Both buildings contributed to the city's development in the late 19th and early 20th centuries. A local organization called the Drexel H. Foundation, which promotes art and culture in Vale, has been working to restore the buildings. The goal is to make them a center for art and culture.

The Vale Hotel and Grand Opera House are two of the most historically significant buildings in Vale. 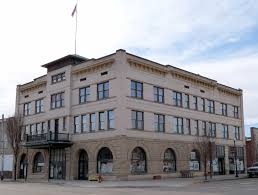 Vale became an important stop on the Oregon trail beginning in the 1860s as it was next to the Malheur River and there were hot springs nearby. The community grew and eventually Vale became the county seat. The Grand Central Saloon, which as noted above became the opera house, was built in 1896. The hotel building was erected in 1908 and initially operated as the U.S. National Bank of Vale. It appears that the owners quickly realized there was high demand for a hotel and converted the rest of the space in building into a hotel, which they called the Drexel Hotel.

The Great Depression forced the hotel to close in 1932. It opened in 1940 and renamed Vale Hotel. It was renovated in 1960 and operated for a number of years but seems to have been vacant for a time as it was slated to be demolished in the 1990s. The Drexel H. Foundation was established to save and work to preserve the buildings. They were listed jointly on the National Register of Historic Places in 1984.