Located on the bluffs of the James River in Richmond, VA, Hollywood Cemetery is second only to Arlington National Cemetery in numbers of visitors each year. Hollywood Cemetery is 135-acres and features an unusual artistry in its design. It is often called “garden cemetery” and was designed by notable architect John Notman of Philadelphia in 1847. There are approximately 18,000 Confederate soldiers interred at the cemetery. Other Civil War notables buried here are General George Pickett and Confederate President Jefferson Davis. President James Monroe and President John Tyler are also buried at Hollywood. Admission is free and historic walking tours are available April through October, Monday-Saturday.

General George Picket (1825-1875), commander during the Mexican-American War and the Civil War. 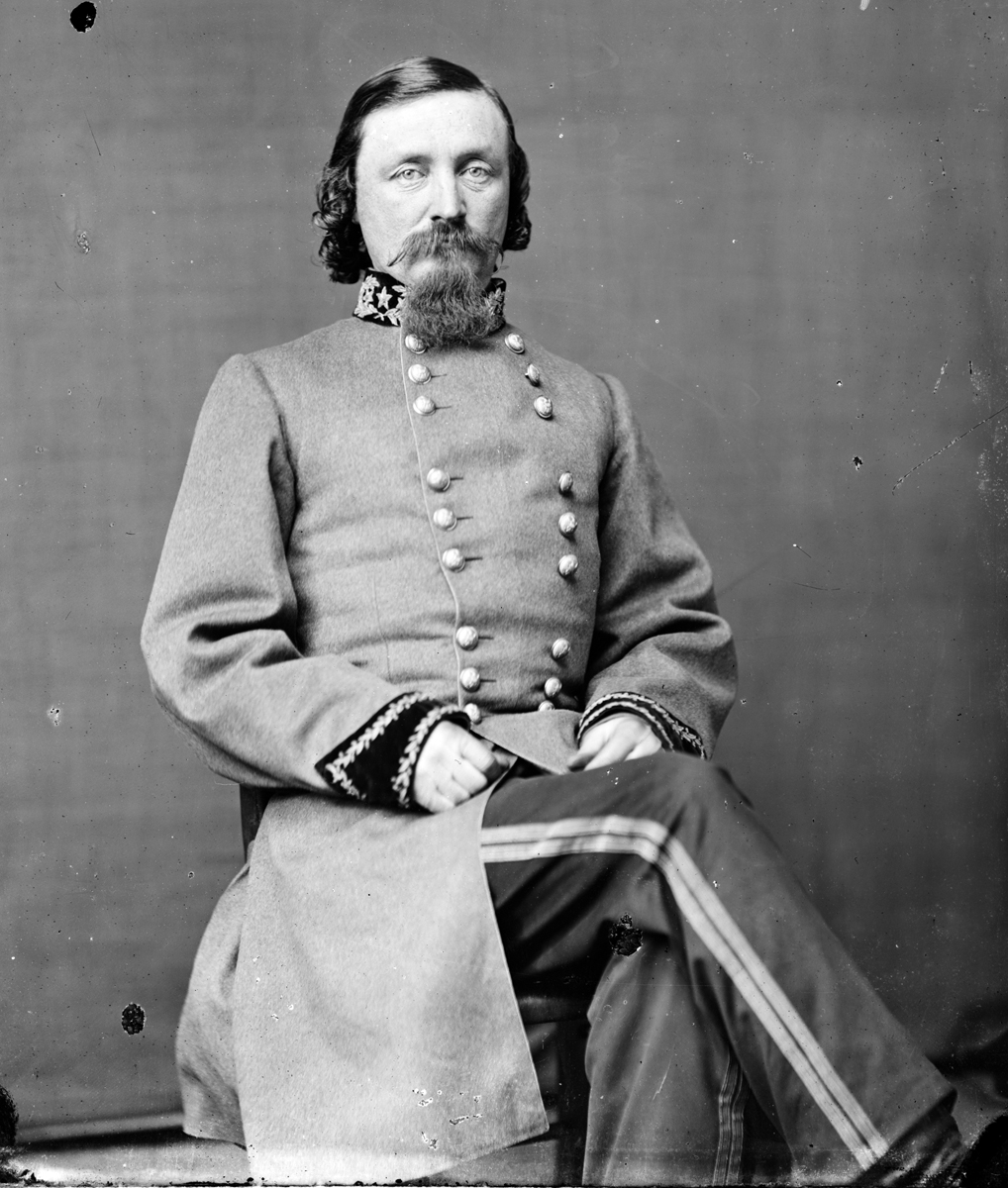 A view of the James River from the outer reaches of the cemetery. 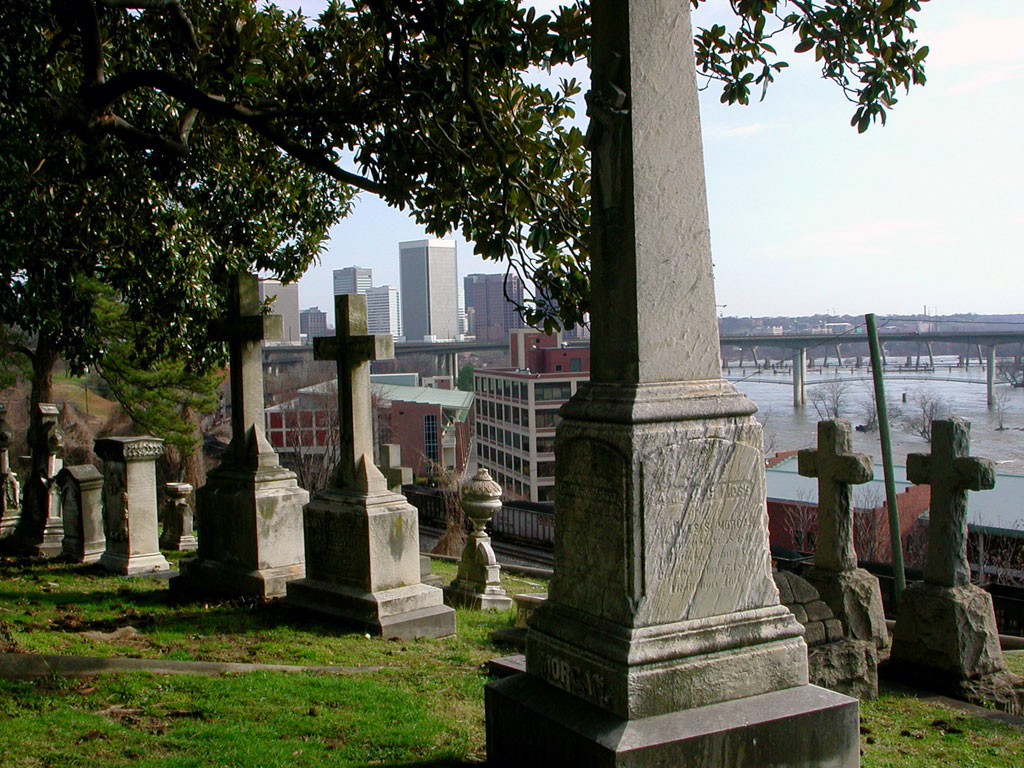 A 90-foot pyramid erected as a memorial to the 18,000 Confederate soldiers buried at Hollywood Cemetery. 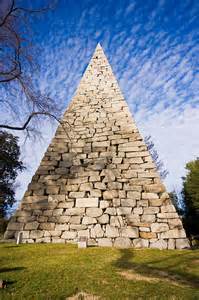 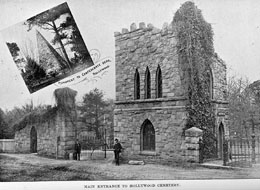 James Monroe Tome in 1920s (R) and as it looks today (L). Courtesy of VCU Libraries. 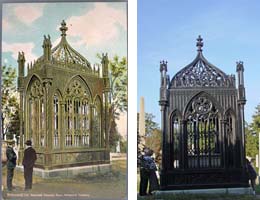 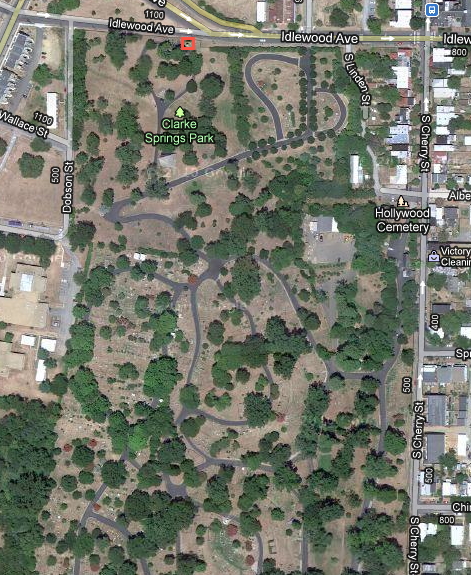 The Hollywood Cemetery boasts a 90-foot stone pyramid in memorium to the 18,000 Confederate soldiers buried within.  The monument was created by the Hollywood Memorial Association from donations.  To date they have collected $18,000 dollars for renovations and upkeep of the premise.  Also in the cemetery rests Confederate President Jefferson Davis and his family, complete with a life-size statue and the tombs or burial plots of Gen. George Pickett, Gen. J.E.B. Stuart, President James Monroe (tomb), and President John Tyler.

The cemetery is on the grounds once owned by William Byrd III (1728-1777), a member of the Virginia House of Burgesses. In the 1840s it was owned by the Harvie Family, who had plans for a family cemetery in this area of their land, known as "Harvie's Woods." A small cemetery was designed and was family-used until the end of the Civil War when the land was used to bury the Confederate dead. In 1869 the 90-foot pyramid was constructed to honor the dead buried there.

General George Pickett is best known for his leadership in the Civil War, specifically his place in the Battle of Gettysburg in 1863.  Gen. Pickett finished last in his class at West Point Military Academy in New York (a blemish he shared with General George Custer) yet managed to lead companies in the Mexican-American War (1846-1848) and the Civil War (1861-1865).  In the Mexican-American War, Gen. Pickett showed aptitude and emerged as a war hero.

During the Civil War, Gen. Pickett served as commander at the Battle of Seven Pines, the Battle of Williamsburg, and the Battle of Gaines’ Mill (where he was severely injured).  It was at the Battle of Gettysburg, July 1-3, 1863, though that Gen. Pickett’s actions garnered his infamy.  Gen. Pickett’s troops arrived two-days late to the battle and were ordered by General Robert E. Lee on July 3rd to assault the Union’s center-line.  The result was retroactively called “Pickett’s charge,” a major tactical error that resulted in the capture, wounding, or death of half of Gen. Pickett’s men by heavy cannon and musket fire.

Gen. Pickett would later experience poor luck at the Battle of Five Forks in April of 1865.  His defeat at that battle caused a major Confederate retreat. As a direct result of the battle’s outcome, General Robert E. Lee surrendered at Appomattox on April 9,1865 officially ending the Civil War.

For most of the Civil War, Richmond, Virginia served as the capitol of the Confederate States of America. Union forces made numerous attempts to retake this site of great strategic—and symbolic—importance, inspired by the battle cry: "On to Richmond!" Its proximity to the fighting made Richmond a center for hospitals and military prisons. On April 3, 1865, Richmond fell to the Union army; General Robert E. Lee surrendered soon after, ending the Battle of Appomattox Courthouse. This tour explores Richmond's central role during the most formative conflict in United States history—and remembers those who fought in it.