The Pensacola Streetcar Strike of 1908

Over 500 State Militia (National Guard) troops from across Florida descended on Pensacola to bring law and order during the streetcar strikes. It was here on the median of Palafox street that these troops camped alongside the streetcar lines they were here to protect. 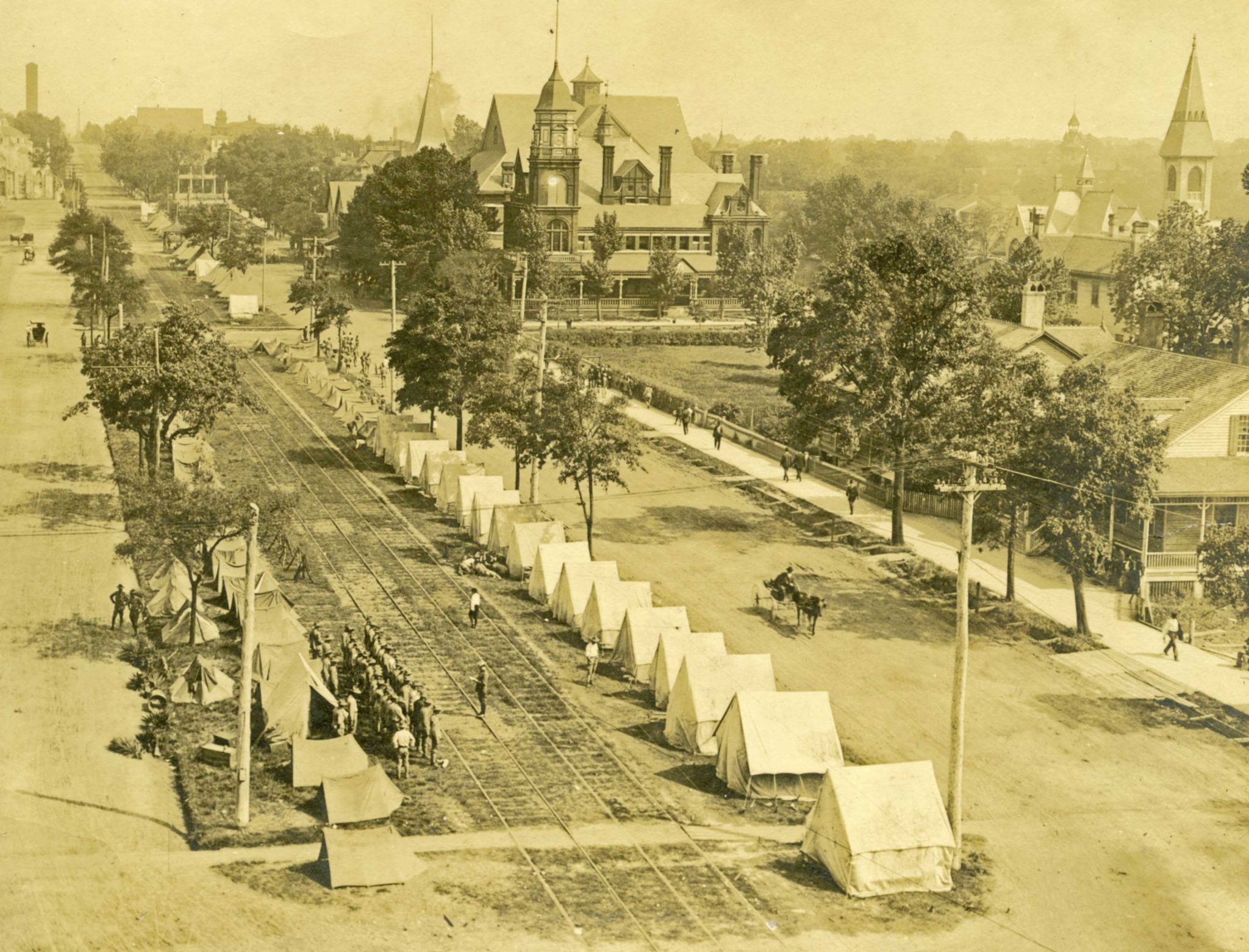 On April 6, Union leader G.C. McCain led a group of striking workers as they seized a streetcar returning to Pensacola on the only operating line. The car was surrendered without violence and taken back to the car barn. This was the first action of the strike, hastening the Pensacola Electric Company’s hiring out-of-town strikebreakers and leading to further violence. 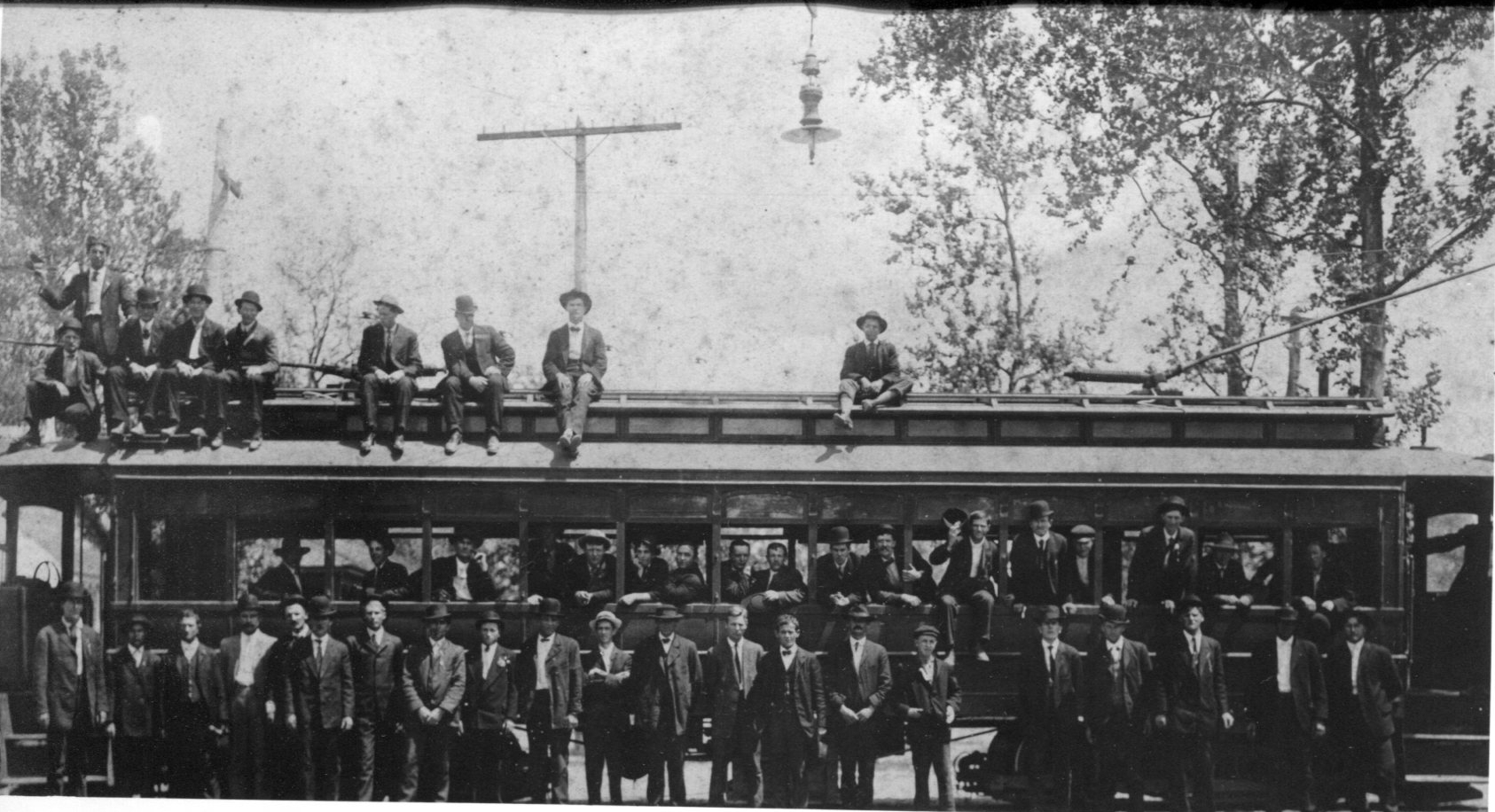 Though he helped with arbitrations between the Pensacola Electric Company and the Streetcar workers union, Pensacola Mayor C.C. Goodman would have to ensure that the company fulfilled their contract to the city. This action most likely hastened the company's use of strikebreakers, which led to a riot and injury of twelve strikebreakers. Goodman would make the request for the 500 state militia soldiers that occupied Pensacola during the strike. 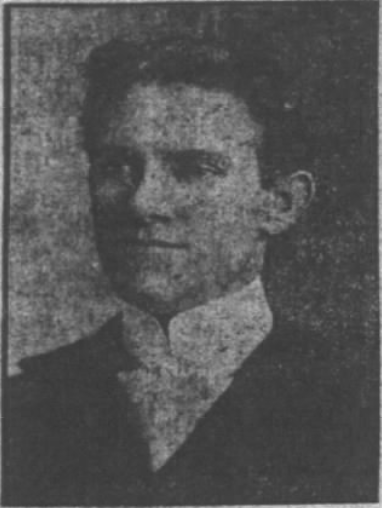 Florida Governor Napoleon Broward would declare martial law and send over 500 state militia troops to Pensacola, at the request of Mayor Goodman, in the hopes of restoring law and order. 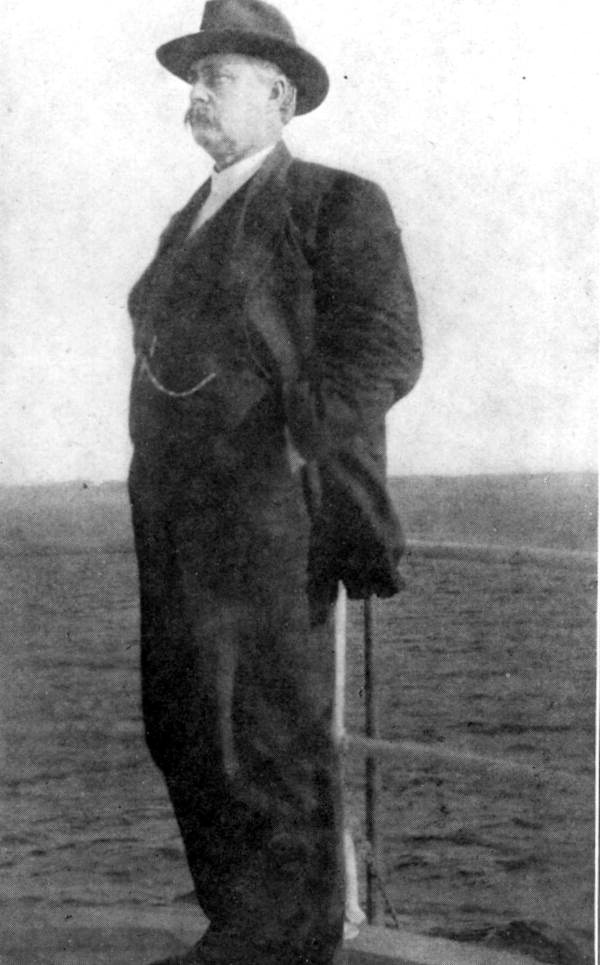 This car barn was converted to sleeping and eating quarters by the Pensacola Electric Company to house the hundreds of strikebreakers brought in to replace the striking workers. 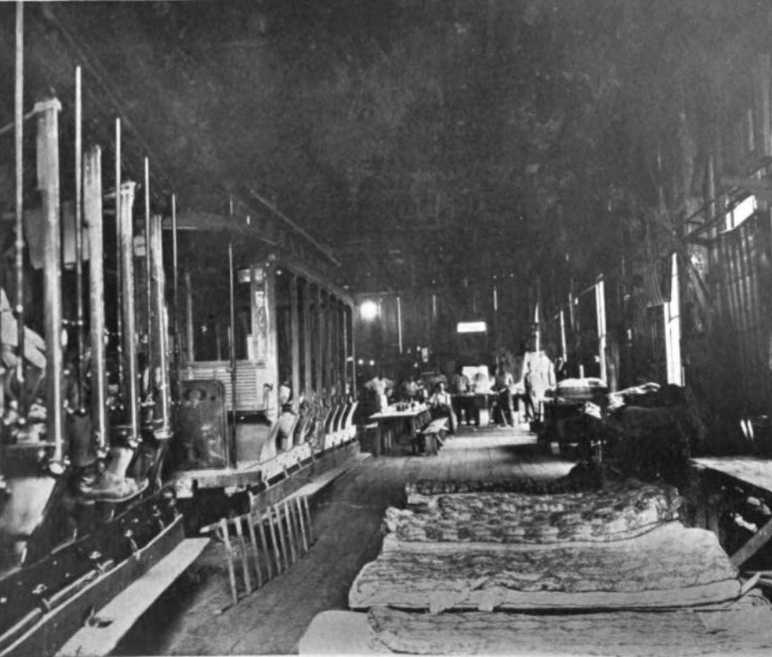 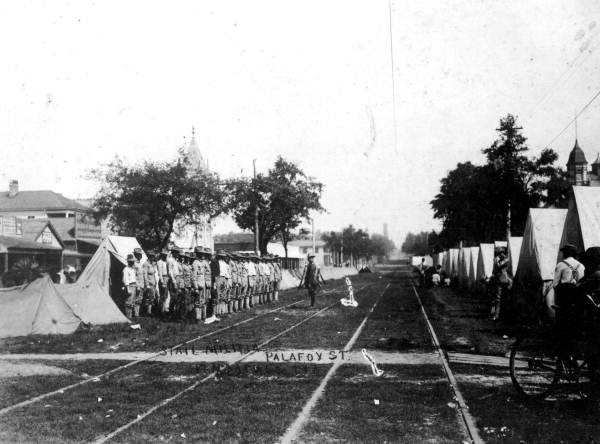 After the initial riot on April 10, which injured twelve strikebreakers, the State Militia was tasked with escorting strikebreakers from the train station to their quarters in the Pensacola Electric Company’s converted car barn. 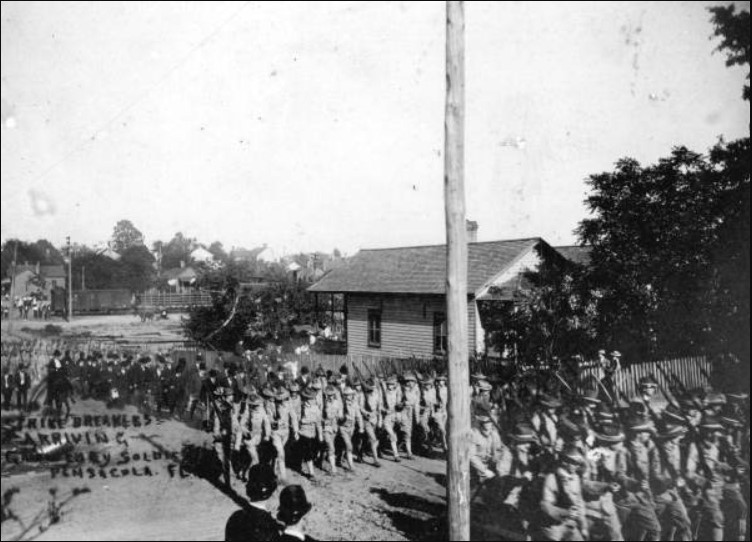 Throughout the strike, the citizens of Pensacola supported the striking workers. Along with offering food to striking Union men, some companies offered to extend credit to the men and their families. 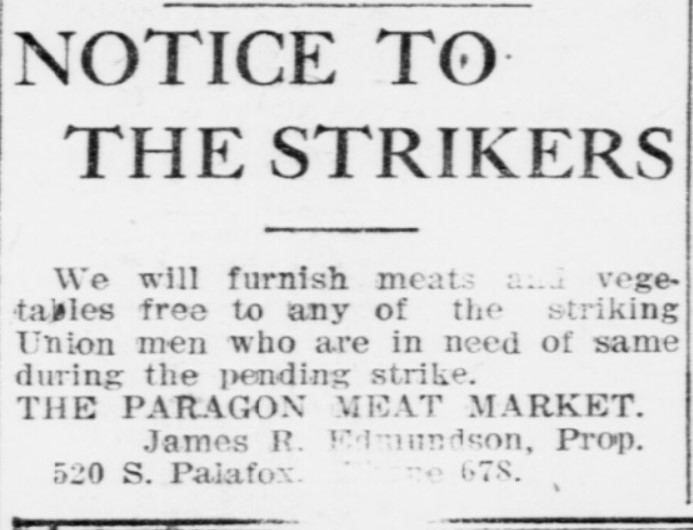 On the afternoon of April 21, a mob of twenty-five men attempted to halt a streetcar. When the motorman failed to comply the men fired a volley of bullets hitting the conductor three times and mortally wounding him. Two strikers would be charged in relation to the attack leading to the waning support of the community. This event along with further violence would lead to the breaking of the strike.

The decline of the stock market and economic readjustment brought about the city’s most serious labor conflict of the early twentieth century. High unemployment rates and many businesses going bankrupt plagued the Pensacola community during the spring of 1908. These conditions were the perfect storm that led to Pensacola’s largest and most violent strike, the streetcar strike of 1908.

In January 1908, conductors and motormen employed by Pensacola Electric formed a union affiliated with the Amalgamated Association of Street Railway Employees of America. Over the next few months, friction arose between the Pensacola Electric Company’s management and the union workers over salary and company policies and practices. The dispute centered on a rule that required suspended employees to return to the company’s car barn three times a day for roll call, preventing them from finding other work to support their families. The company found that this rule was necessary to prevent workers from violating the policy to get time off. These disputes continued with no resolution until the company fired union president G.C. McCain on April 4. The workers voted to strike the next day, with seventy to eighty men walking off the job. After declaring the strike, the conductors and motormen brought the streetcars into the barn, shutting down all lines except Bayshore. John Leadley, the Pensacola Electric Company manager, refused to recognize the workers’ union and contested that McCain and sympathizers conjured the dispute and went on strike due to his discharge and that no dispute existed.

On April 6, McCain led a group of striking workers as they seized a streetcar returning to Pensacola on the remaining Bayshore line. The car was surrendered without violence and taken back to the car barn, shutting down the final operating line. Though having worked to arbitrate the labor dispute, Pensacola mayor C.C. Goodman had to ensure that the Pensacola Electric Company fulfilled their contract with the city and continue to run their streetcars, even if that meant bringing in strikebreakers. The company guaranteed that they would have the lines up and running in a few days as soon as they could bring in the men to run the cars.

The Pensacola Electric Company had already begun running ads in the local newspaper for strikebreakers with little luck. On April 9, the Pensacola Journal revealed that one of the car barns was being outfitted into sleeping and eating quarters for out of town strikebreakers. Over the next two days, strikebreakers began to arrive. However, the real trouble began on April 10, when fifty strikebreakers arrived by train. As they marched to the company headquarters, a large crowd of strikers and sympathizers followed. Eventually, a riot broke out, which lasted an hour. As the fighting ensued, strikers began to hurl bricks, and the frightened strikebreakers fled. Twelve strikebreakers were injured, and when police led the others to safety, another mob of two hundred followed. The local police had been virtually powerless to quell the riots, causing Mayor Goodman to contact Governor Napoleon Broward in Tallahassee and request state aid in maintaining law and order. The Governor sent a detachment of state militia on April 11 and declared martial law. The officers quartered at the Escambia County Courthouse, and the enlisted men camped here, along the median of North Palafox Street. On April 13, additional troops arrived, along with forty-three more strikebreakers. The troops provided security for the strikebreakers and escorted them to the company’s car barn. The arrival of the state troops was such big news that it made headlines as far north as New York.

Even during these troubled times , the community still stood united and showed their support for the striking union men. Eleven city labor unions held a mass meeting on April 12, located at the Pensacola Opera House. Two thousand people packed the hall, including strikers and sympathizers. The unions approved a resolution to the strike and thanked the public for their support. This sentiment further brought the community together and encouraged citizens to show their support.[1] In the Pensacola Journal’s April 11 issue, a local grocer advertised free meat and vegetables to striking union men. Donations from the community to the striking motormen and conductors totaled at least five hundred dollars, and some merchants showed their willingness to extend credit to the families of strikers.

Eventually, the streetcars ventured out again, this time with over five hundred state troops patrolling Pensacola’s streets. Even with the troops’ presence, large crowds gathered on the streets shouting insults and harassing the operators and passengers, with some even hurling bricks through car windows at night. After a time, the tension and violence seemed to calm down, and Governor Broward began withdrawing troops. This peace would be short-lived when on the afternoon of April 21, a mob of twenty-five men sent a volley of shots into a streetcar after it failed to halt, mortally wounding the conductor. This event caused public opinion of the union to wane, especially after the city charged two strikers with the shooting. After the last of the state troops were withdrawn, two more violent events occurred. Strikers set the Big Bayou trestle on fire and detonated a dynamite charge underneath a streetcar; luckily, no one was injured. On May 11, sixteen strikers broke ranks and returned to work. Faced with crumbling ranks, waning public support, and staunch opposition from the Pensacola Electric Company, the thirty-eight-day strike collapsed on May 13. In the end, there was no clear victor. The Pensacola Electric Company lost thousands of dollars to the transportation and housing of strikebreakers. The strikers ended up calling off the strike and were not allowed to return to their jobs, except for a select few who were able to return to their jobs. However, this strike did boost union support, and in the 1908 elections, union-endorsed candidates scored significant victories in Pensacola.

Created by Justin MIlewski (Instructed by Jamin Wells, University of West Florida) on November 17th 2020, 2:20:09 am.