On July 4, 1910, black boxer Jack Johnson defeated Jim Jeffries for the heavyweight championship. After Jeffries' defeat, race riots erupted in many American cities. The riots were usually the result of white men who assaulted black men in an attempt to prove that Jack Johnson's victory would not change the nature of local race relations or jeopardize white supremacy. In Roanoke, Virginia, at least six men were injured and one may have been killed in one small race riot that occurred in present-day Market Square.

Article about the race riot in Market Square 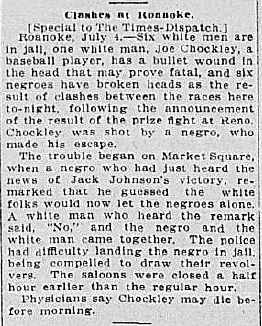 In response to Jack Johnson's victory over Jim Jeffries, there were fights and small race riots throughout the country. Johnson was known as the "Galveston Giant". The fight between Johnson and Jeffries was billed as the "Battle of the Century". Johnson was the subject of many racial arguments particularly his relationships with white women. Many newspapers across the country reported the racial riots that occurred in Roanoke Virginia following the prize fight between Johnson and Jeffries. The Market Square area of Roanoke was home to one of the worst of these riots.

The Richmond Times-Dispatch of July 5, 1910 published this report of the incident:

Six white men are in jail, one white man, Joe Chockley, a baseball player, has a bullet wound In his head that may prove fatal, and six negroes have broken heads as the result of clashes between the races here tonight following the announcement of the result of the prize fight at Reno.

Joe Chockley was shot by a negro, who made his escape. The trouble began on Market Square when a negro who had just heard the news of Jack Johnson's victory, and remarked that he guessed the white folks would now let the negroes alone A white man who heard the remark said, "No," and the negro and the white man came together. The police had difficulty landing the negro ln Jail being compelled to draw their revolvers. The saloons were closed a half hour earlier than the regular hour. Physicians say Chockley may die before morning.