Also referred to as the Seven Days Campaign, The Seven Days Battles were a series of battles around Richmond, Virginia during the Civil War from June 25 to July 1, 1862. The battles pitted the Confederate forces of General Robert E. Lee against the Union Army of the Potomac commanded by General George B. McClellan. Lee was determined to push McClellan back from the Confederate capital and proceeded to attacked his forces repeatedly at Mechanicsville, Gaines' Mill, Savage's Station, Garnett and Golding’s Farm, and Malvern Hill. Though McClellan would seem to have won most of the battles, he retreated until he reached Harrison's Landing on the James River. The retreat was as much a detriment to Union morale as it was a boost to that of the Confederacy. 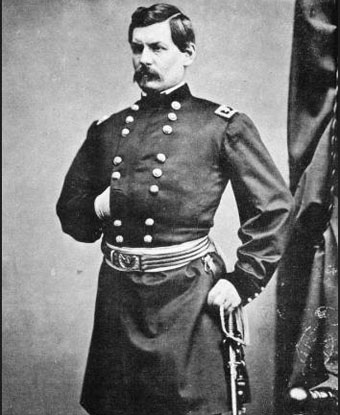 Map of the Union offensive 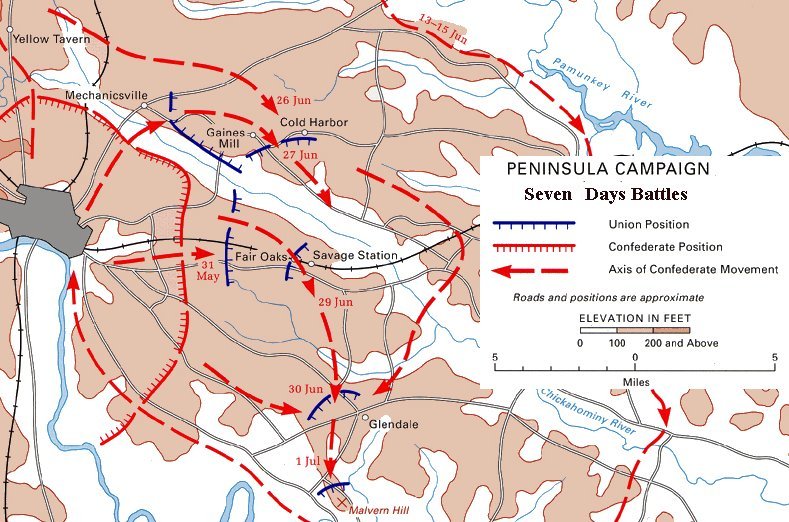 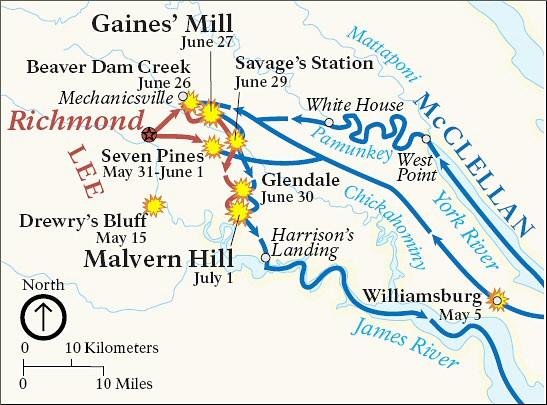 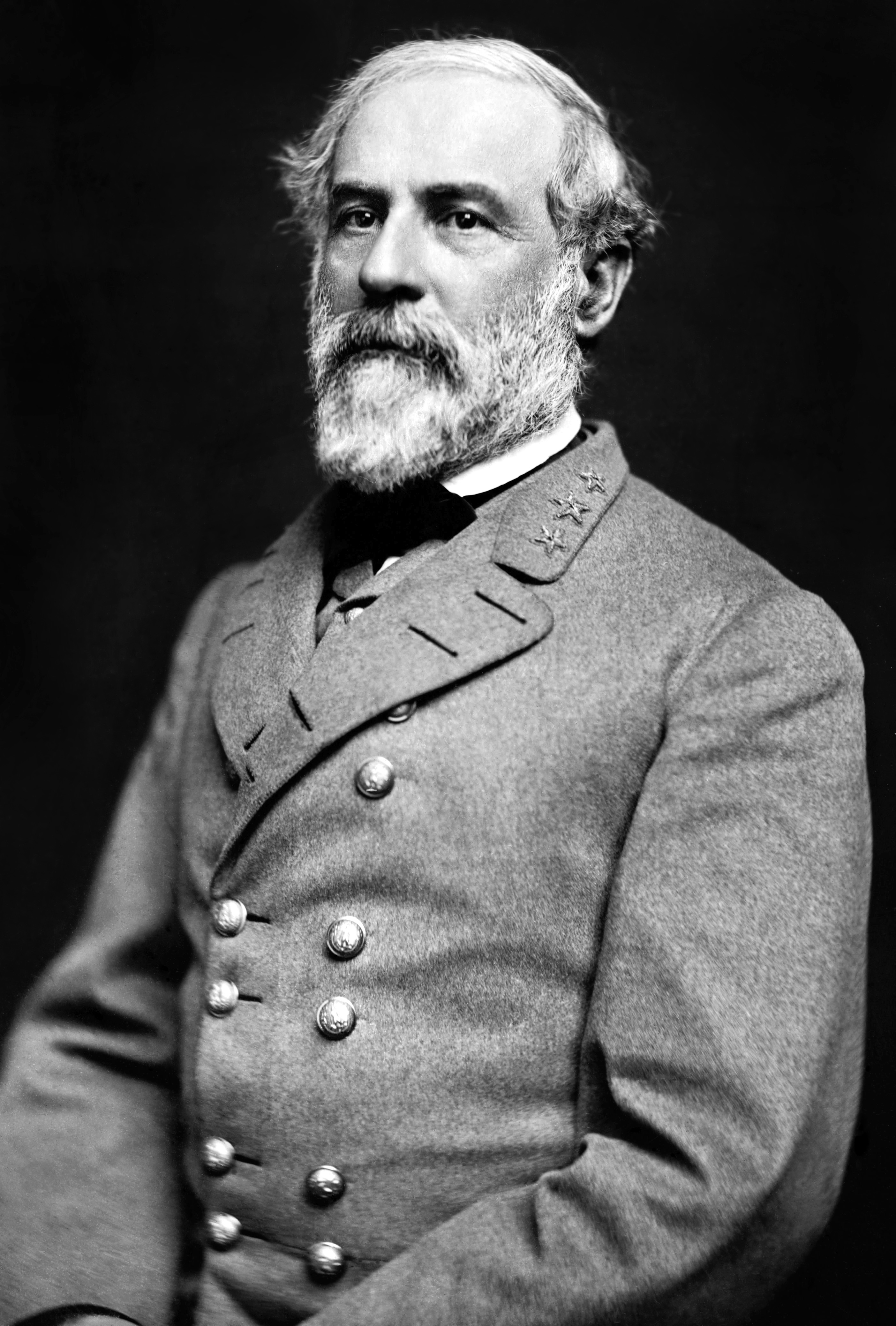 This marker shows the path of Confederate troops who attacked McClellan's defensive earthworks near this location during the Seven Days' Battles. 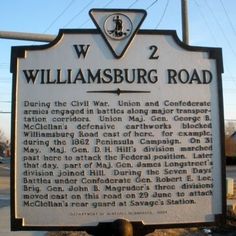 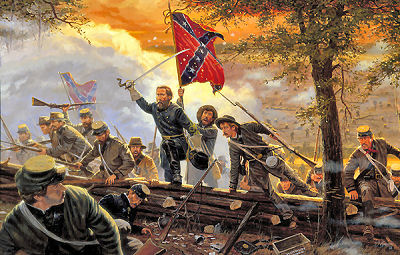 This 1862 depiction of the Seven Day's Battle shows the Union trying to hold off the attacks by the Confederacy. 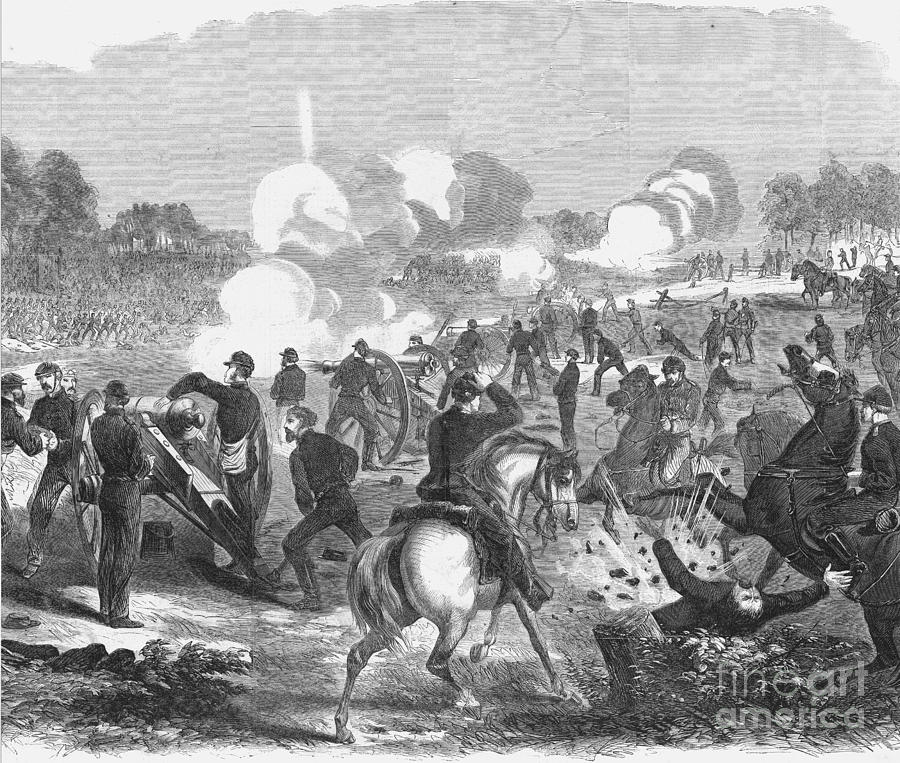 Prior to the start of these battles, the Confederate Army of Northern Virginia had been put under the leadership of a new commander which was General Robert E. Lee. He was expected to defend the Confederate capital of Richmond against George B. McClellan and his well-trained Army of the Potomac. McClellan moved slowly and landed on the Virginia Peninsula to approach Richmond from the east. Even though he had built a disciplined army of over 150,000 men, he was in constant fear that the Confederate army was larger than it actually was. This would result in the unsuccessful Peninsula Campaign by the Union.

The Union started out on June 25, 1862 where they attacked the Confederate troops initiating the Battle of Oak Grove which turned out to be McClellan’s only tactical offense against Lee’s forces. What followed was Lee planning a series of attacks against Union forces over the next few days. Both sides battled at Beaver Dam Creek, Gaines’s Mill, Garnett and Golding’s Farm, and at Savage’s Station. All these battles took place on June 26-29. The Confederate troops seem to have the upper hand going into the Battle of Glendale and Lee tried getting every opportunity he could get. McClellan and his Union forces had to keep retreating from these back-to-back attacks each day as they ran off to Harrison’s Landing right near the James River.

Lee tried hitting the Union hard like before on June 30, but due to poorly executed orders, Union reinforcements, and the delay of Stonewall Jackson’s troops entering the area, the Confederates lost their chance to hurt the Union more and the Union troops retreated to a defensive position on the Malvern Hill. The following battle on the hill saw Union forces inflict many casualties to the Confederate troops despite heavy artillery opposition. McClellan’s army suffered many casualties of their own, but they maintained their position near the James River.

In the aftermath, the Confederate side won the battles, but suffered more deaths to their soldiers. The Union lost 15,849 troops over the seven days of battles while the Confederates lost over 20,000 men. After the Union returned to Harrison’s Landing, Union gunboats were called in for protection in case of a surprise attack. McClellan wrote many letters to the War Department requesting more soldiers for his renewed offensive against Richmond. General-in-Chief Henry Halleck downplayed McClellan’s plans and told him it was mass suicide if they went through with it. He declined McClellan’s request for more soldiers saying he didn’t believe the Confederate troops were in large numbers as McClellan claimed.

Lee, on the other hand, would continue his aggressive approach to the war and battle the Union in the Second Battle of Bull Run crushing the Union’s defenses and the Maryland Campaign, but that would fail after the Union took victory in the Battle of Antietam. President Abraham Lincoln would announce the Emancipation Proclamation where this executive order would free 3.5 million slaves in the United States and forgo European support for the Confederacy.