After his AIDS-related death in 1993, Richmond sought to memorialize Arthur Ashe, its hometown sports hero and humanitarian. Ashe spent the majority of his youth in the highly segregated Richmond while developing his tennis skills under the tutelage of Ronald Charity, Dr. Walter Johnson. During his professional career, Ashe became the first Black man to play in the Davis Cup, the first and only Black man to win the U.S. Open and Wimbledon, and he won three Grand Slam titles. In 1980, complications from a heart attack forced Ashe to retire from professional tennis, with an overall record of 818 wins, 260 losses, and 51 titles. Before his death, Ashe worked with sculptor Paul DiPasquale to create a statue of himself that was intended to be placed onsite of the tennis player’s proposed African American Sports Hall of Fame in Richmond. In 1994, the nonprofit youth mentoring organization called Virginia Heroes decided to move forward with commissioning DiPasquale’s statue of Arthur Ashe. Former Virginia Governor L. Douglas Wilder made the controversial suggestion that the statue be placed on Monument Avenue. During the next 18 months, public debate and various opinions swirled around Richmond regarding the placement of the Ashe statue: many white Richmonders opposed the inclusion of an African American sports icon with Confederate military leaders, while many African Americans argued that Ashe’s legacy deserved more than placement alongside Southern white supremacists. In the end, the city boldly upheld the decision to place the Arthur Ashe memorial on Monument Avenue, forever changing the appearance and history of Monument Avenue. On July 10, 1996, the late tennis star’s 53rd birthday, Richmond unveiled the 28-foot-tall Arthur Ashe Monument at the intersection of Monument Avenue and Roseneath Road to a crowd of 2,000 people. Proudly symbolizing a new future for the former capitol of the Confederacy, former Virginia Governor Wilder declared during the unveiling ceremony, “Monument Avenue is now an avenue for all people.” Being a member of the Monument Avenue Historic District, the Arthur Ashe Monument was designated a National Historic Landmark on December 3, 1997. 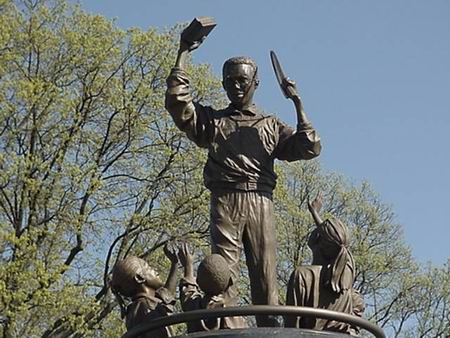 Eric Allen Hall, Arthur Ashe: Tennis and Justice in the Civil Rights Era-Click the link below for more info about this book 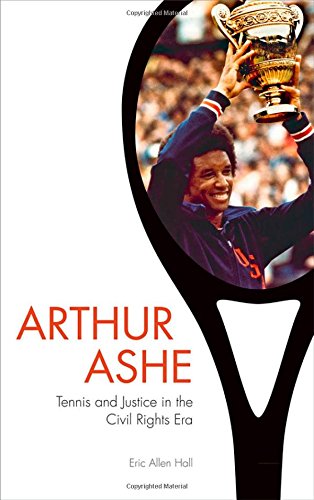 Arthur Ashe in Rotterdam in 1975 during the 1975 ABN World Tennis Tournament, which he won. 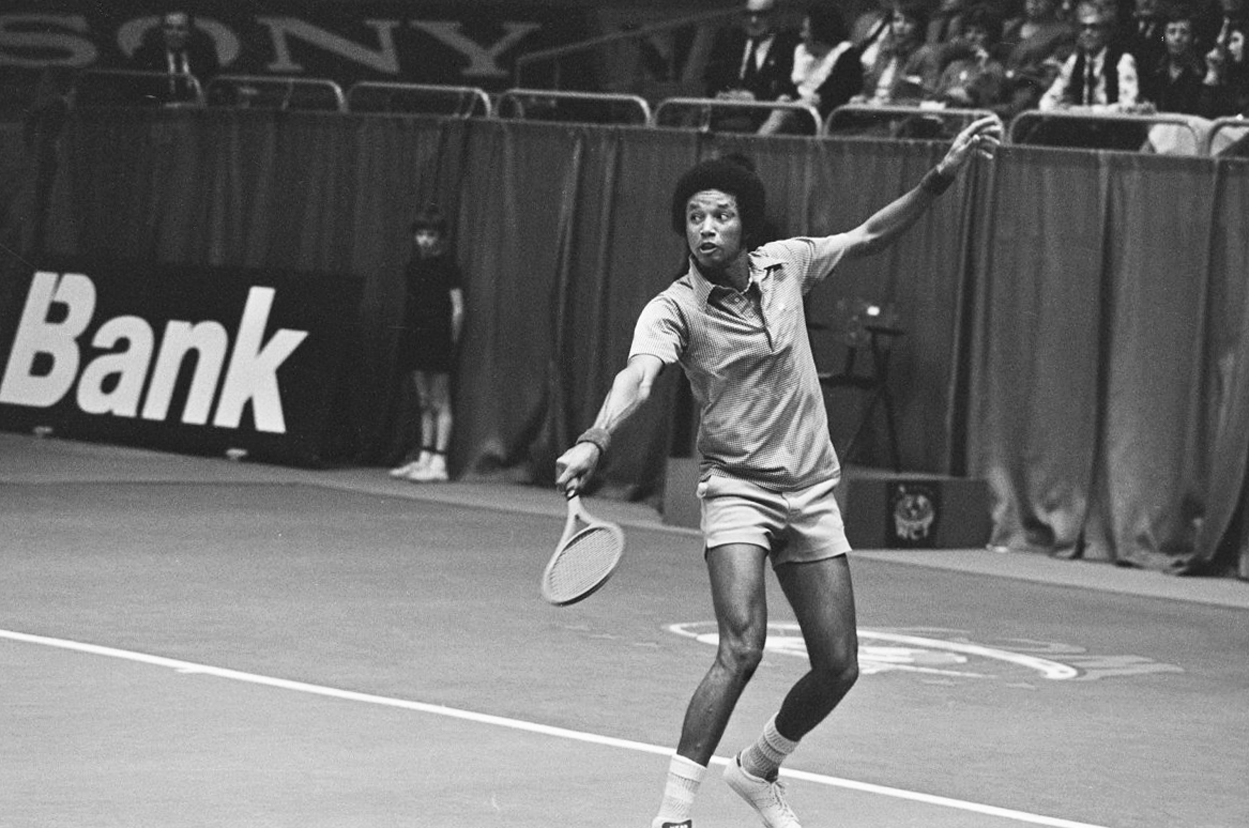 Paul DiPasquale working on the monument. 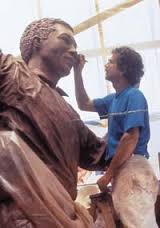 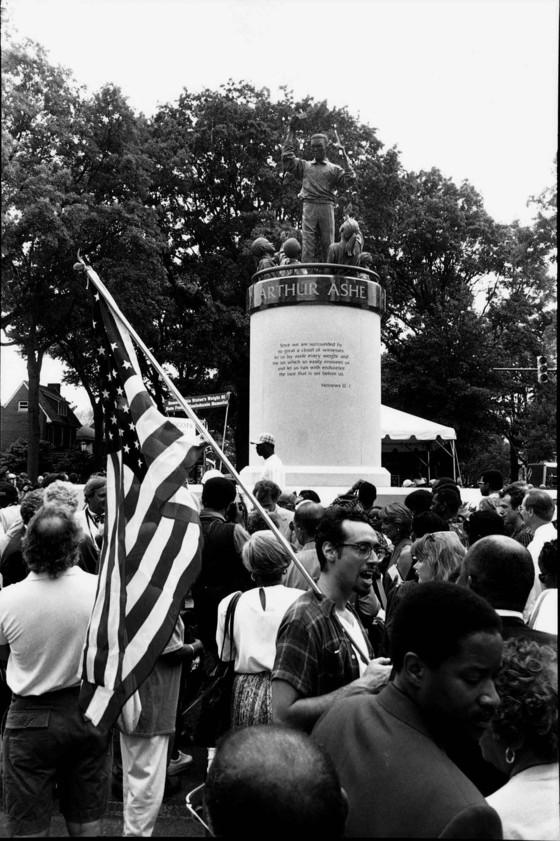 Arthur Ashe during his college career at UCLA 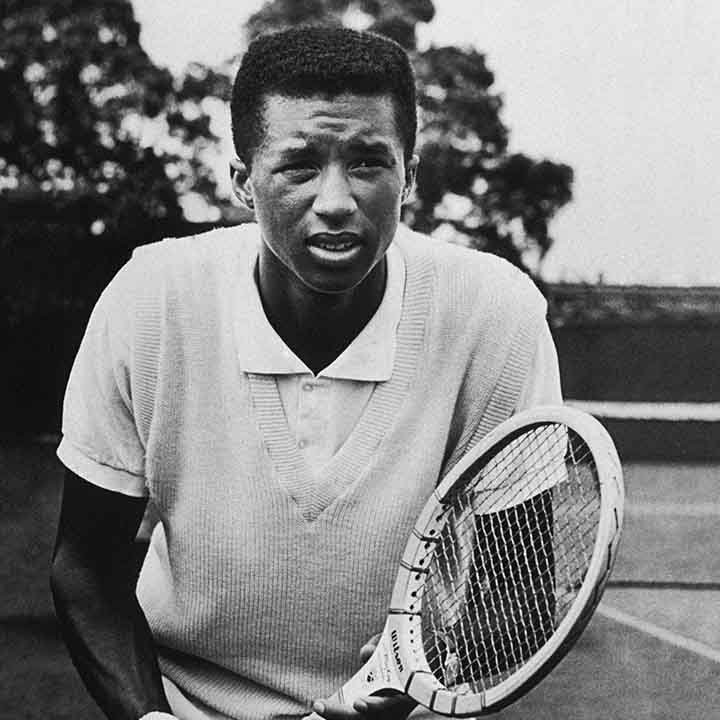 Ashe as a youth with his trophies 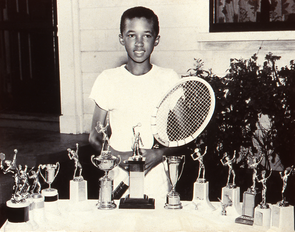 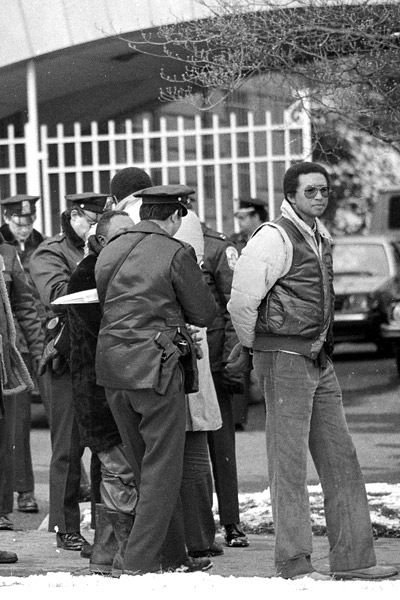 Arthur Robert Ashe, Jr. was born on July 10, 1943 to Mattie Cunningham and Arthur Robert Ashe, Sr. in a highly segregated Richmond, Virginia. Arthur Sr. worked as a caretaker for the eighteen-acre Brook Field Park, one of Richmond’s Black-only playgrounds, in the middle of which sat the house in which the Ashes lived. Because of his home site, the young Ashe began playing tennis as early as four years old. Mattie Cunningham Ashe passed away in 1950 from pre-eclampsia, after which Arthur Sr. encouraged his seven-year-old son to better his life by focusing his attention on reading and tennis. During that same year, Ashe met one of the nation’s best professional African American tennis players, Ronald Charity. Charity took a special interest in Ashe and taught him the basics of tennis form and nuances of the game for the next three years.

Understanding that Ashe was truly gifted and needed a real coach and mentor, Charity introduced him to Dr. Walter Johnson, an African American physician and tennis coach from Lynchburg, Virginia. Johnson is credited with discovering Althea Gibson, who was known as the “Jackie Robinson” of women’s tennis during the late-1950s. Under Johnson’s guidance, Ashe developed his famous court disposition and blossomed into a world-class athlete, winning the boys-under-thirteen championship for the American Tennis Association (ATA) in 1955 and the junior national singles championship in 1960 and 1961. After his junior year of high school, Ashe left the heavily segregated Richmond and moved to St. Louis to live with tennis official Richard Hudlin, which provided the young tennis star with opportunities to play against stronger competition. Ashe graduated first in his class from Sumner High School in 1961 and accepted a tennis scholarship to the University of California, Los Angeles. While at UCLA, Ashe led the school to three NCAA runner-up titles and one national title, winning the individual NCAA title in 1965. During his time at UCLA, Ashe joined the U.S. David Cup team as the first African American member and played from 1963-1970, 1975, 1976, and 1978.

After graduating from UCLA in 1966, Ashe joined the U.S. Army and rose to the rank of second lieutenant while continuing to play competitive tennis. After his departure from the Army in 1968, Ashe won the first of his three Grand Slam titles when he beat Tom Okker of the Netherlands in 1968 during the first U.S. Open, becoming the only African American man to do so. Ashe’s two other Grand Slam titles came in 1970 when he won the Australian Open and in 1975 when he won at Wimbledon, becoming first and only Black man to win the singles title at that tournament. In 1979, Ashe suffered a severe heart attack which forced him to retire from professional tennis one year later, leaving behind a career record of 818 wins, 260 losses, and 51 titles.

During a second heart bypass surgery in 1983, Ashe received a blood transfusion that contained the HIV virus. It was another six years before he received an HIV diagnosis, going public with his condition in 1992. Succumbing to AIDS-related pneumonia on February 6, 1993, Arthur Ashe died at 49 years old. His body lay in state in the Governor’s Mansion in Richmond, the first person granted that honor since Confederate General Stonewall Jackson in 1863. It is estimated that 5,000 visited his body at the Governor’s Mansion, while 6,000 attended his funeral. Arthur Ashe was laid to rest in Richmond’s Woodland Cemetery.

In addition to Ashe’s remarkable tennis accomplishments, he devoted much of his time to social activism, particularly to ending segregation, supporting inner city youth, and HIV awareness. On December 2, 1992, two months before his AIDS-related death, Ashe achieved one of his greatest successes with the establishment of the Arthur Ashe Institute for Urban Health which continues to address healthcare needs for urban and inner-city communities. One of Ashe’s projects that never came to fruition was the creation of an African American Sports Hall of Fame in Richmond. Before his passing, sculptor Paul DiPasquale met with Ashe to design a statue of the tennis star to be placed onsite of the hall of fame.

Seeking to honor Arthur Ashe, Virginia Heroes, a nonprofit youth mentoring organization in Richmond, announced a $400,000 fundraiser to erect the DiPasquale statue in 1994. The Virginia General Assembly donated the first $100,000 towards the project. Former Virginia Governor and the nation’s first elected African American governor, L. Douglas Wilder, proposed placing the Arthur Ashe statue on Monument Avenue, forever memorializing him along Richmond’s most famous thoroughfare. The idea of placing Arthur Ashe among the Confederate’s most prominent leaders was a bold move by the Governor, but it also signaled a new, more racially inclusive direction for Richmond. Understandably, the suggestion caused a great deal of public controversy and debate for the next eighteen months.

Confederate heritage groups opposed adding Arthur Ashe to Monument Avenue. These groups argued that, in addition to the obvious racial motivation behind the suggestion, it was the nature of Ashe’s accomplishments and not his race that would undermine the theme of Monument Avenue, since he was a professional athlete and not a military commander. Richmond’s African American community also expressed dissatisfaction with the suggestion of placing Ashe on Monument Avenue. Richmond’s African American Mayor Leonidas Young and newspaper editor Raymond Boone expressed indignation at the Monument Avenue proposal, citing how disrespectful it would be to Arthur Ashe, his legacy, and African Americans in general to place the athlete among those monuments honoring the Confederacy’s white supremist leaders. Even Jeanne Moutoussamy-Ashe, Ashe’s widow, opposed the statue. Jeanne urged the city to focus on erecting a hall of fame instead, which she felt like would more appropriately honor her husband’s legacy.

Despite the numerous oppositions to the Arthur Ashe Monument, the Richmond City Council moved forward with DiPasquale’s design and location in March 1996. On July 10, 1996, the tennis star’s 53rd birthday, the city unveiled the 28-foot-tall Arthur Ashe Monument at the intersection of Monument Avenue and Roseneath Road to a crowd of 2,000 people. Featuring the tennis star holding up books and a tennis racket while surrounded by children, the statue initially received harsh criticism for its unconventional appearance and perceived lack of artistic value. But the significance of the memorial soon settled in and the Arthur Ashe Monument became something of a shrine, particularly for the city’s African American community. The monument came to symbolize a racial defiance of the historic white status-quo of Richmond and the glorification of the South’s Lost Cause. As former Virginia Governor Wilder declared during the unveiling ceremony, “Monument Avenue is now an avenue for all people.”

Being a member of the Monument Avenue Historic District, the Arthur Ashe Monument was designated a National Historic Landmark on December 3, 1997.