The Petersburg National Battlefield commemorates the Richmond-Petersburg Campaign of the Civil War. This nine month siege cut the Confederate Army off from their supplies by creating a 30 mile trench and forced General Robert E. Lee to fall back to Appomattox. It is estimated that there were 28,000 Confederate and 42,000 Union casualties during the period of the siege. The National Battlefield now includes restored buildings and a small museum. The park is best viewed in a 33 mile, 16 stop driving tour.

Entrance to the Battlefield Park 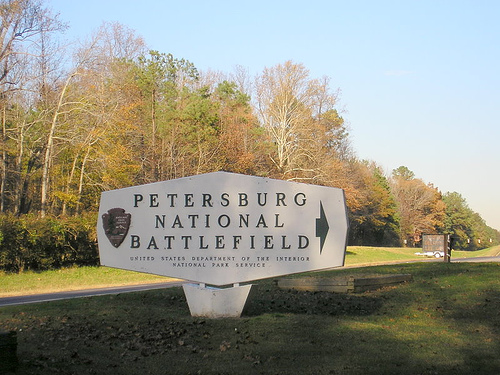 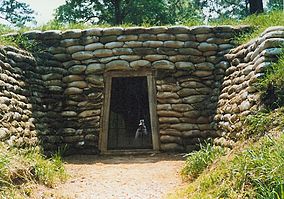 The "Dictator" siege mortar at Petersburg. In the foreground, the figure on the right is Brig. Gen. Henry J. Hunt, chief of artillery of the Army of the Potomac. 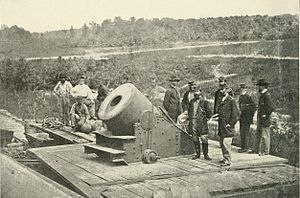 Map showing where the siege lines around both Richmond and Petersburg were located. Many can be seen still to this day. 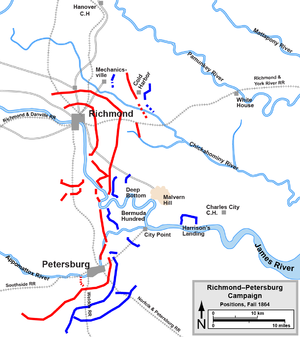 Section of some of the preserved trenches 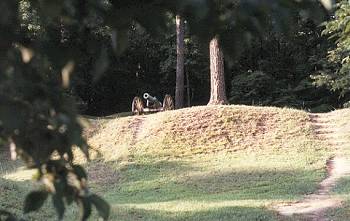 Union soldiers in their trenches during Christmas of 1864 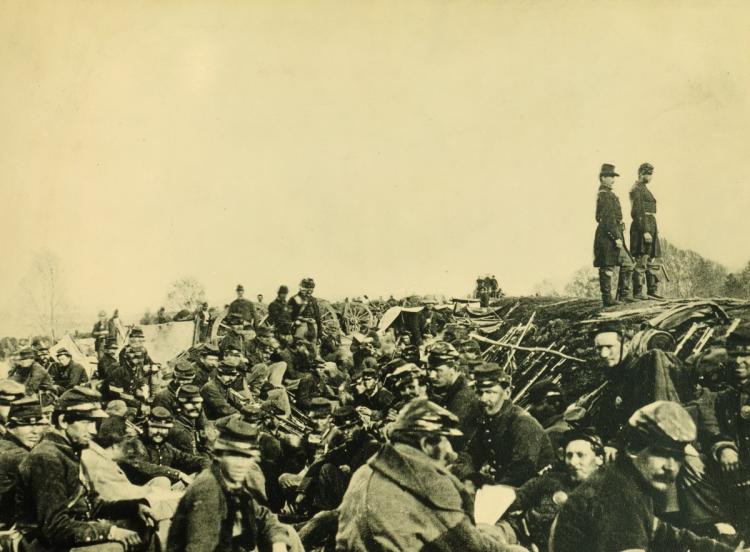 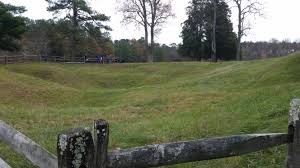 The Richmond-Petersburg Campaign, also known as the Siege of Petersburg, began June 9th of 1864. The initial assault was lead by Benjamin Butler because many Confederate soldiers had recently left Petersburg to reinforce Lee who was stationed to the north. When Butler's campaign failed, one more attempt was made to take Petersburg. From June 15th to the 18th, the Union worked to break down Confederate defenses. After four days little was gained. The order was then given to create trenches and begin a siege to cut off reinforcements for the city, forcing a surrender or retreat.

Numerous attempts to cut off railroads were thwarted. The Wilson-Krautz raid from June 22nd through July 1st. This raid was able to destroy 60 miles of railroad but it was quickly repaired by the Confederates. The Second Battle of Ream Station was able to destroy 16 miles of track north of Stony Creek. Grant began to launch small attacks to draw more forces out of Petersburg to weaken the Confederate hold on the city.

The final battle of the Richmond-Petersburg Campaign was the Battle of Fort Stedman. Lee's forces were slowly waning and he decided to make a strategic move; Lee sought to cut off reinforcements coming from Shenandoah. The Battle was poorly planned and caused very little damage to Union lines. The Union took the opportunity to break into the lines of the Confederate soldiers.There were 1,044 Union casualties and a staggering 4,000 casualties for the Confederates. This left the Confederate Army considerably weakened.

Today the battlefields serve as a national park with various historical buildings. The Visitor's Center is found just east of Petersburg on Route 36. The center includes some information about the battle. The 33 mile driving tour continues all the way to Poplar Grove Cemetery, a cemetery where nearly 5,000 Union soldiers are buried.