Founded in 1966 by General L. Kemper Williams and his wife Leila, the Historic New Orleans Collection (HNOC) is a museum, research center, and publisher dedicated to preserving the history and culture of New Orleans and the Gulf South. The organization has restored seven architectural treasures between its Royal Street Complex and the Williams Research Center and on Chartres Street. Its four exhibition spaces—the Williams Gallery, the Louisiana History Galleries, the Boyd Cruise Gallery, and the new Laura Simon Nelson Galleries for Louisiana Art—faithfully depict the multicultural stories of the region, from permanent displays exploring the evolution of Louisiana to rotating exhibitions showcasing history and fine art. Researchers—dedicated scholars and casual history buffs—can access THNOC’s materials through the Williams Research Center. 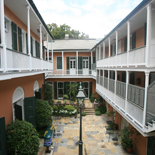 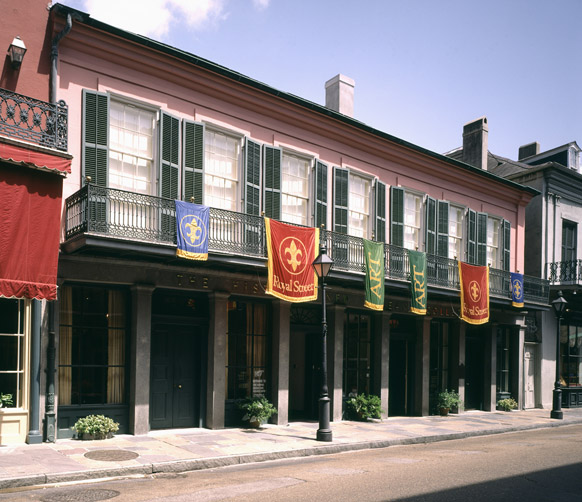 This main front building, which today houses the Williams Gallery, Louisiana History Galleries and the museum shop, occupies land that has been in continuous use from the early days of the colony in the 1720s.

Dating back to 18th century, the entire block belonged to the French Crown and was the site of workmen’s barracks and the king’s forges. Later, when the land was subdivided, a private dwelling was constructed on the Royal Street lot but destroyed by the great fire of 1788. In 1792, Jean François Merieult, a prosperous merchant and trader, purchased the property on Royal Street and began construction on the building that would survive the fire of 1794. Merieult’s Spanish colonial house was remodeled in the 1830s by the Cuban firm of Lizardi Brothers, commission merchants and international bankers. The Merieult House today still preserves the style of the 1830s renovation.

A Grand Greek revival room used for meetings, seminars, receptions, and exhibitions began life as colonial warehouse. The two-story building borders The Collection’s main courtyard and is named for the banking activities conducted by the Lizardi firm on this site in the 19th century.

It originally built as a warehouse by Jean François Merieult in 1794–95. A 20th-century renovation revealed that material from a previous warehouse had been incorporated into Merieult’s building. Today small hideaways in the room’s columnns reveal small French bricks and ventilator grills dating from the early colonial warehouse.

Across the courtyard from the Counting House, the three-story Maisonette features wooden galleries and railings. This service wing, situated on Merieult’s original purchase, was constructed over an earlier structure that was built at the same time as the Merieult House in the 1790s. Archives, dated February 22, 1819, show a warehouse on this site. Today the Maisonette houses staff offices but can be admired from the Courtyard.

One of the main attractions of the Historic New Orleans Collection, is named for Kemper and Leila Williams and the 1940s and 50s decor remains the same as when they lived there. Tours of the residence are offered daily.

Built in 1889, almost 100 years after the Merieult House, the residence is an Italianate, two-story brick house with galleries. The history of the property dates to Jean François Merieult, but it was Jean Baptiste Trapolin who built his house at the rear of the lot and purchased contiguous land fronting on Toulouse Street. The residence, surrounded by three courtyards, is often described as a hidden house.

The townhouse is a newer addition to The Collection, acquired in 1980. The Townhouse is home to The Collection’s photography department and staff offices. Dating from the 19th century, this two-story brick building replaced an earlier Creole townhouse. The balconies and the columnns are typical late 19th century design and the window openings replicate portions of the earlier Creole townhouse.

Louis Adam built the early two-story masonry house at 722 Toulouse Street in 1788. In the 1970s, the house was restored to its original Spanish colonial style to include a wood gallery and high-pitched, tiled roof. In the 1930s, it was opened to boarders, and for a short time the young playwright, Tennessee Williams, lived high up in a garret room, which can be toured today.

This double cottage at 726-728 Toulouse Street is now a workspace of the exhibition preparation department. It was purchased by The Collection 1990. During the summer of 1991, an archaeological dig revealed evidence of all the structures that existed prior to the house now on the site:

The philanthropist Thomy Lafon bought the cottage in 1876 and willed it to the Society of the Holy Family.

In addition to its massive collection of New Orleans-related maps, photographs, surveys and other documents, the Historic New Orleans Collection contains a number of collections of rare or otherwise specialty materials-

In 2001, THNOC acquired the largest private collection of Tennessee Williams materials anywhere in the world from collector Fred Todd. In addition to the many typescripts and manuscripts of works such as A Streetcar Named Desire and The Glass Menagerie, there are dozens of playbills, as well as signed first editions of Williams’ plays and other works, unpublished letters, a myriad books about Williams, translations of his work, film scripts, and photos of Williams with friends and associates. The more rare items include notes on the filming of The Rose Tattoo, an operatic version of Summer and Smoke, a play-script for a western, a prose-poem to lover Frank Merlo, and numerous promotional materials and memorabilia from Baby Doll, including the film script with notes from director Elia Kazan and some of Williams’ own financial records. Additionally, the Historic New Orleans Collection publishes the Tennessee Williams Annual Review, the only regularly published journal devoted exclusively to the works of Tennessee Williams. It is available in print and electronically.:

William C. Cook War of 1812 in the South Collection:

The William C. Cook collection focuses on the War of 1812 in the South, particularly the Creek War, the war in the Gulf of Mexico, and the Battle of New Orleans. Major General Andrew Jackson, military commander during these events, is well represented, and the collection also includes various important U.S. Army and militia documents, as well as materials concerning the participation of the southern Indian tribes and manuscripts from the British perspective. Also present are related materials concerning the War of 1812 in the South from a later date, the largest single grouping of which contains campaign materials from the 1828 presidential election. These principally focus on the 1815 execution of the six militia men that were most dramatically executed in the infamous "Coffin broadsides."

THNOC also maintains the substantial Clarence John Laughlin collection, which contains film negatives, transparencies, photographs and prints spanning the decades from the 1930s to the 1980s, taken both by and of Laughlin. The collection documents Laughlin's life and work throughout both New Orleans and the world.

The Williams Research Center contains an abundance of materials relating to New Orleans' German settlers, organizations, music, businesses, and rural German enclaves. The collection includes an assortment of prints, photographs, postcards, letterheads, maps, sheet music and other objects. The J. Hanno Deiler Papers contain hand-written and typescript drafts of the historian’s major books, articles, and speeches, as well as a number of genealogies of Louisiana-German families.

Prior to 2007 the Sugar Bowl maintained its archives at the Louisiana Superdome. However, the Superdome was damaged by Hurricane Katrina, and though the archives were undamaged, the Bowl decided the archives needed a more suitable home, and thus donated the materials to the Collection.

Starting at the statue of Ignatius J. Reily and Hotel Monteleone, the infamous hangout of many New Orleans writers, this short walk includes a pair of museums and several landmarks including the former homes of Tennessee Williams and William Faulkner. Be sure to also use Clio to see other New Orleans literary landmarks such as the George Washington Cable House.