Built in 1800, Dumbarton House is a Federal style mansion located in the Georgetown neighborhood of Washington, D.C. It is the headquarters of The National Society of The Colonial Dames of America (NSCDA) and features a museum of colonial history. Its first occupant was Joseph Nourse, the first Register of the Treasury. The property was acquired by the NSCDA in 1928 and was given the name “Dumbarton House” after the original name of the land. The NSCDA hoped to illustrate domestic life in Georgetown during the early Federal period and opened the two main floors of the structure as a museum in 1932. The property was listed on the National Register of Historic Places on January 28, 1991.

Dumbarton House has undergone numerous preservation projects supported by the NSCDA, to restore the house to its original 1800s appearance. 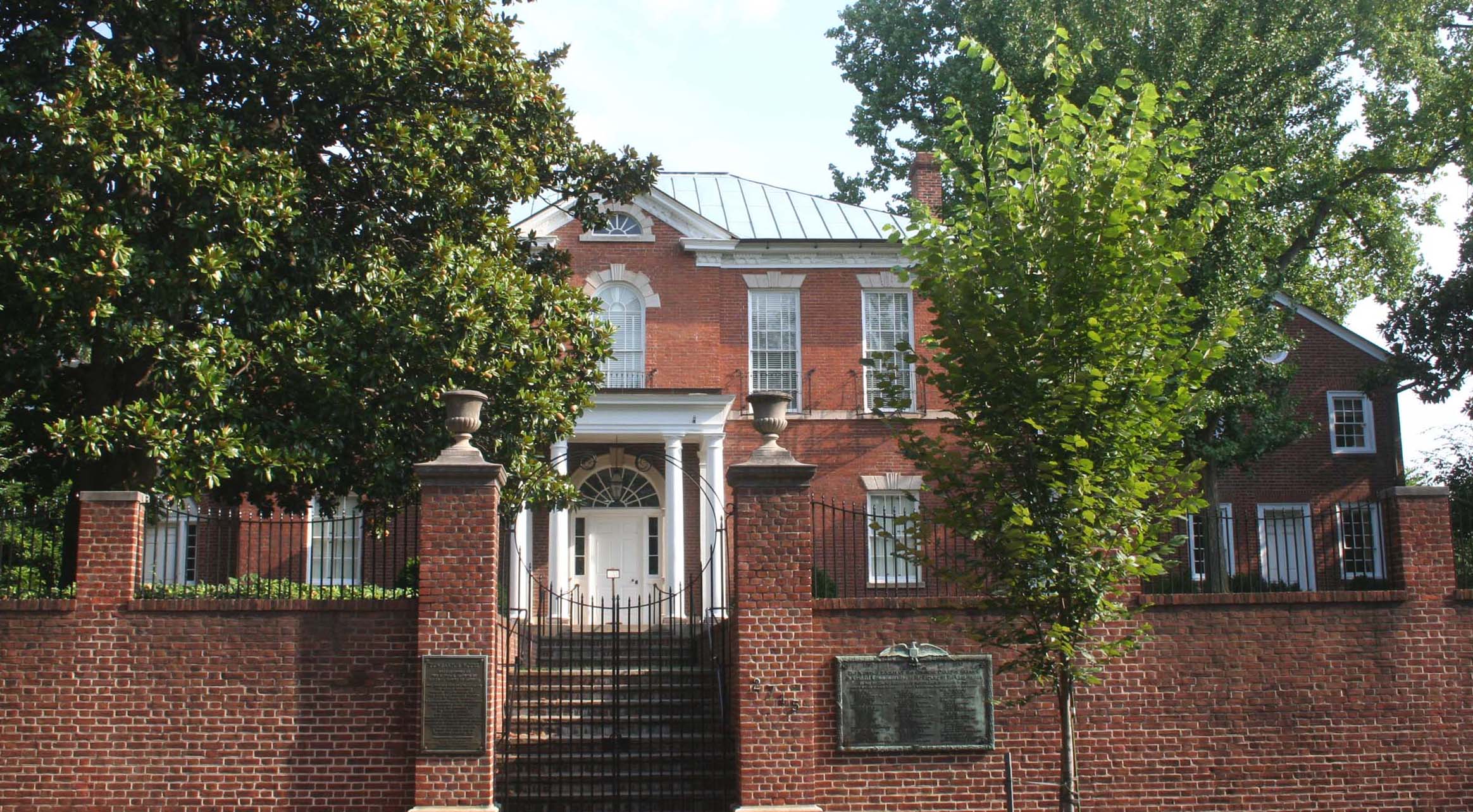 The name “Dumbarton” goes back almost a century before the mansion was built. In 1703, Scottish immigrant Ninian Beall, a member of the Maryland House of Burgesses and commander of Maryland Provincial Forces, purchased 795 acres of land near the Potomac River. He named it “Rock of Dumbarton” after a geological feature in Glasgow, Scotland. Four acres of the Beall property was sold in the late 1790s to Samuel Jackson, a Philadelphia merchant. Jackson built the Dumbarton House was built around the same time the Federal government moved from Philadelphia to Washington, D.C.

In the early nineteenth century, the house changed owners and residents multiple times. In 1804, the house was then purchased by Joseph Nourse. Born in London, England, Norse settled in Virginia and joined the American Revolution, serving as secretary to General Charles Lee and deputy secretary of the Board of War. In 1779, he was appointed Assistant U.S. Auditor General in the new federal government and, in 1781, First Registrar of the U.S. Treasury. He followed the federal government to D.C. and purchased the Dumbarton House. The Dumbarton House museum emphasizes this period in their interpretation of the house’s history. In 1813, Nourse sold the property to Charles Carroll, who named the house Bellevue. Carroll owned the house for around thirty years, though mostly rented it out to tenants. Carroll brought First Lady Dolley Madison and the Secretary of the Navy’s wife, Eleanor Jones, to Bellevue as the British encroached on D.C. in the War of 1812.

The house was then sold and occupied by different families until purchased in 1928 by the National Society of the Colonial Dames of America (NSCDA). The organization was founded in 1891 for women who can trace ancestry back to the American colonies. Dumbarton House is one of around thirty historic house museums operated by the NSCDA. The mansion was known as Bellevue until its restoration in 1932, when the Society renamed it Dumbarton House.

Dumbarton House is documented as "an outstanding representation of American architecture of the early Federal Period." It exists much as it did when occupied by Joseph Nourse, a major difference being that the house was moved 100 feet to the north of its original location in 1915, during the rerouting of Q Street. Dumbarton House's collection of furniture, textiles, paintings, silver, and ceramics, consists primarily, but not exclusively, of objects dating from the Federal period (approximately 1790-1830). The Dumbarton House manuscript and document collection includes one of the original known copies of the Articles of Confederation, as well as papers, journals, account books, ledgers and letters documenting nearly 300 years of Nourse family life.

The museum’s collections tell the story of life in the City of Washington during the formation of the Early Republic and a new national identity, and the experience of becoming a Capital City during a time of great uncertainty and great accomplishments. Dumbarton House also illustrates the past and present role of women and of The National Society of The Colonial Dames of America in the national historic preservation movement.