The Brooklyn Historical Society (BHS), founded in 1863, is a museum, library, and educational center, preserving and encouraging the study of Brooklyn' s 400-year past. The Society's headquarters building is a National Historic Landmark designed by George B. Post and constructed in 1878-81 for what was then named the Long Island Historical Society. The headquarters is located in the Brooklyn Heights Historic District, an elegant neighborhood that was established after the first steam-powered ferry connected the city to Brooklyn. Its booming growth ended after the Brooklyn Bridge opened in 1883 followed by the consolidation of Brooklyn and New York City in 1898. Along with its lovely homes, this upper-middle-class neighborhood also is beautified by 19th Century churches. It was designated the first historic district in 1965.

The society's headquarters building, on the corner of Pierrepoint and Clinton Streets, was built in 1878–81 and was designed by George B. Post in the Renaissance revival style. 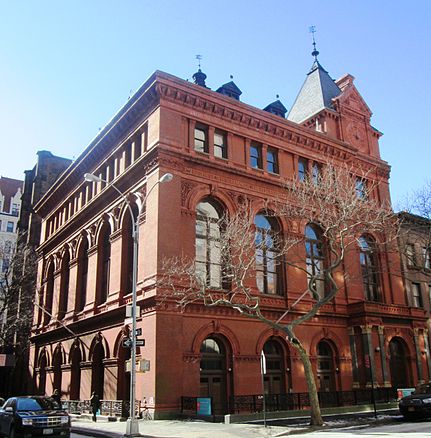 The Brooklyn Historical Society was founded in 1863 as the Long Island Historical Society to preserve and commemorate the history of the United States, New York, and particularly, the Long Island community. The society was established during a time of unprecedented growth and development, and many felt that the area's agricultural/rural past would be permanently lost. Administrators of the Long Island Historical Society hoped to preserve that history while engaging the public with dynamic and innovative scholars, writers, and activists. Speakers at the society included Sir Arthur Conan Doyle, author of the famed Sherlock Holmes series, abolitionist Julia Ward Howe, and publisher/political reformer Horace Greeley.The society acquired its first permanent headquarters with the opening of a structure designed by George B. Post and situated at the corner of Pierrepoint and Clinton Streets.

Inspired by the design of the Brooklyn Bridge, the Queen Anne-style building features an innovative truss system that supports the ceiling of the building’s central reading room and is notable for its bright terracotta façade, intricate brickwork, and myriad decorative details. It was the first building in New York City to use locally produced terra cotta. The building boasts stained glass in-window lunettes, a central laylight, Minton tile floors, custom-made bronze hardware, and elaborately carved black ash woodwork in the library. The façade of the building is adorned with busts of Christopher Columbus, Benjamin Franklin, William Shakespeare, Johannes Gutenberg, Ludwig van Beethoven, and Michaelangelo Buonarroti sculpted by Olin Levi Warner.

The facility operated only as a library for much of the twentieth century due to declining membership but was reopened as a museum and educational center in the 1970s and 1980s. The official name of the institution was changed in 1985 to the Brooklyn Historical Society as the center reinvented itself to keep pace with the changing social climate. It established an oral history program geared towards documenting Brooklyn's most overlooked communities and inhabitants. Likewise, the facility began to design exhibits addressed a diverse range of topics, including African American churches in Brooklyn and the AIDS epidemic.

The society is still housed in the original building designed by George B. Post and has since completed large-scale renovations of the property in both 1999 and 2014. The building is one of the last remaining works of the renowned architect George B. Post. It is also the first major edifice on the East Coast to use locally produced terra cotta. Its facade is an integrated combination of stylistic elements with Queen Anne and Italian Renaissance influences. It was added to the National Register of Historic Places as a National Historic Landmark in 1991.