The tallest structure in Vermont, this monument commemorates the Battle of Bennington. The battle occurred here on August 16, 1777, and represents a turning point in the Revolutionary War. Today, visitors may ride an elevator to the top of the Bennington Monument for panoramic views of the valleys and rolling hills of Vermont, Massachusetts, and New York. The monument was completed in 1891 and features from blue-grey magnesian limestone. 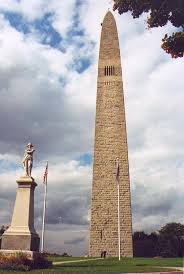 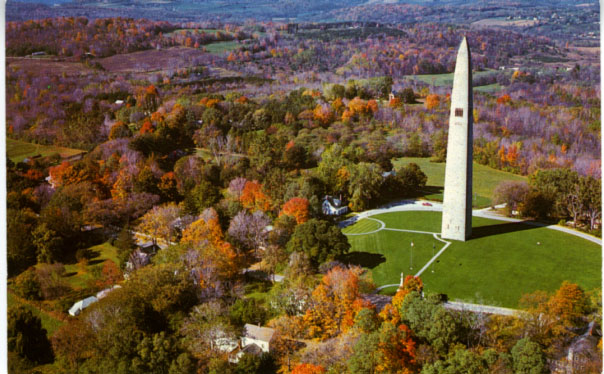 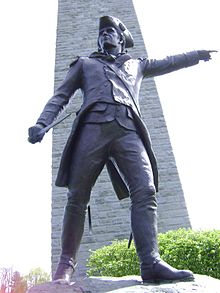 The Battle of Bennington 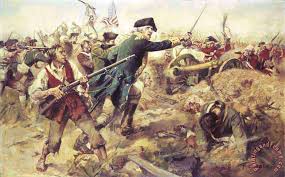 The Battle of Bennington occurred on August 16, 1777, near the village of Walloomsac in New York, just a few miles west of Bennington. It has been considered a key turning point in the war for independence from the British. In the summer of 1777, the war was in favor of the British. Several thousand British soldiers under the command of General John Burgoyne were headed south from Montreal, Canada. Burgoyne’s plan was to meet up with two other Generals at Albany and cut off the New England colonies from New York.

Two events may have saved the revolution at this critical juncture. The first was the initial meeting in Albany never occurred due to outside facts that the generals did not account for, and the second was the Battle of Bennington. Through this battle, the Americans proved that they are a force that will fight and win no matter the cost. Burgoyne's troops, unaware of any forces, had heard they would be able to capture the horses, food, and other supplies they needed there, and they believed the people there would help them. Little did they know that quite the opposite was in store for them. Messengers brought news of the Burgoyne’s movements to Bennington which allowed the people to prepare for their arrival.

Before the British arrived at Bennington, 2,000 American soldiers launched a vicious attack on their adversaries. The skirmish lasted nearly three hours. After the smoke cleared the Americans emerged victoriously. Without the last-minute arrival of the Green Mountain Boys, commanded by Seth Warner, there might not have been such a result.

Nearly 200 British soldiers were killed or wounded in the battle, and 700 soldiers taken prisoner. The Americans loses numbers just around 40 men. The Battle of Bennington was a great setback for the British and ultimately set the scale for an even greater American victory known as the Battle of Saratoga, where General Burgoyne surrendered. These victories caught the eye of one of Britain’s greatest adversaries at the time, France, to come into the war alongside the Americans. The war did not end until 1781, but these two battles help shift the tide of the war in favor of independence.

Nearly 100 years later, in 1875, the citizens of Bennington decided that create a memorial in honor of the battle. Although there was conflict on what it should look like and where it should be, but finally agreed on Hiland Hall, whom was a former governor of Vermont. Hall said that it should be "massive and lofty." Hall died before the completion of the monument by it was massive nonetheless. The structure reaches a whopping 306 feet above the ground and is made of double layers of dolomite. In order to obtain this material, it took special railroad lines to bring the stones in from New York State and steam driven derricks and elevators to put them in place. When the monument was finished, a photograph of the town and countryside was taken from the very top.

Public interest waned in the 1950s, and after some talk of demolishing the aging monument, the state of Vermont took it over and refurbished it. With the addition of an elevator, a gift shop, and staff that consists of groundskeepers and guides, the monument is a pleasant place to visit any time of year. Now nearly 50,000 people visit the monument annually.