Since the heyday of the oil boom, Tulsa's been getting its kicks from Route 66.

Installation immediately prior to completion. Photo courtesy of the City of Tulsa. 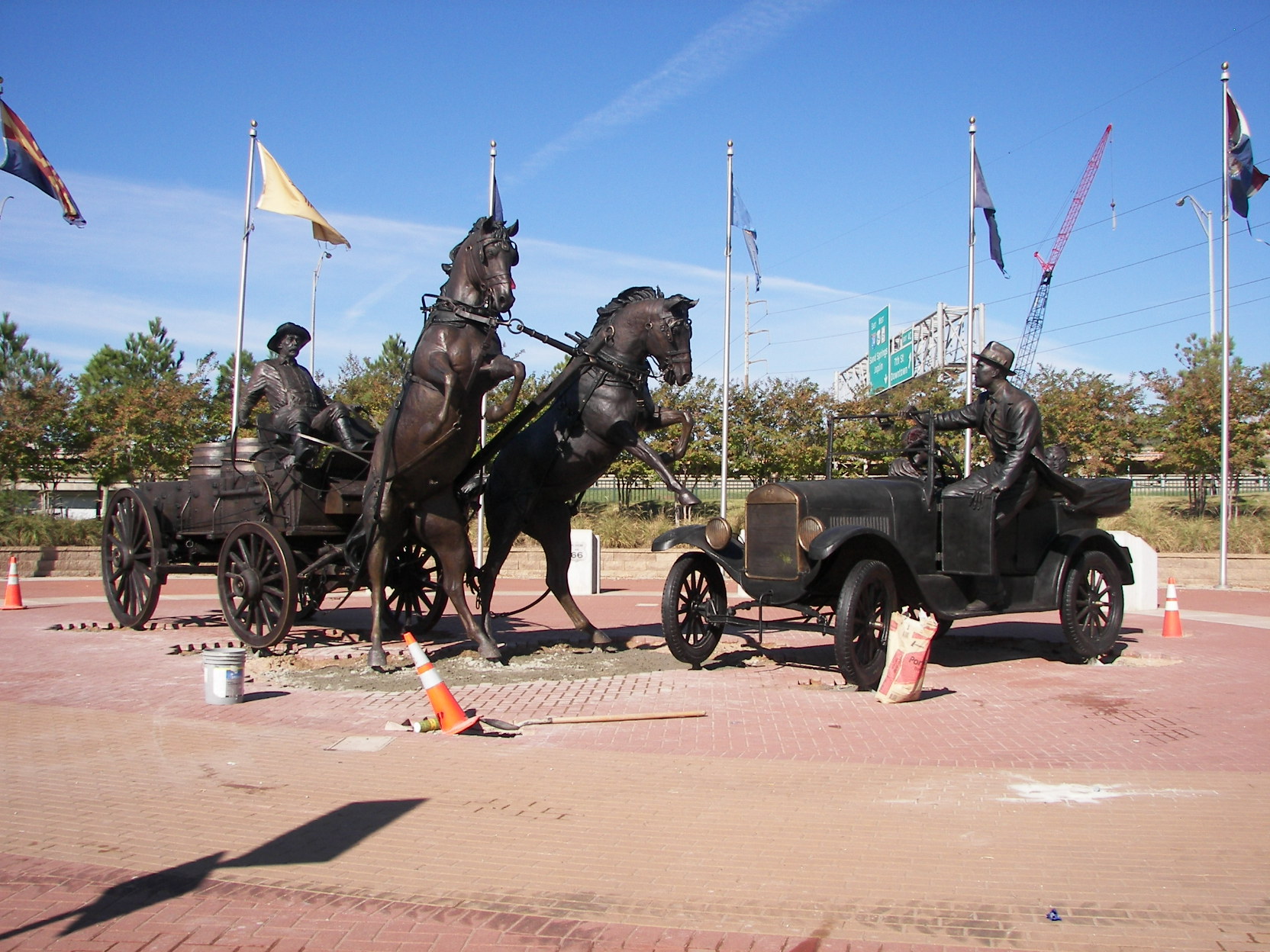 Dedicated on November 9, 2012, this large bronze installation by sculptor Carl Summers depicts the rich opportunity, cultural dissonance, and economic innovation that “The Mother Road” U.S. Highway 66 brought to Tulsa. The work sits at the intersection of Riverside Drive and Route 66/ Southwest Boulevard, and is backgrounded by the magnificent 11th Street pedestrian bridge. The sculpture symbolizes the rapid and startling shift from agrarian and low-tech to urban and high-tech which was unavoidably ushered in along The Mother Road. The “West” (left) side is comprised of an oil field worker driving horse-drawn buggy. His horses are startled by the monstrous oddity coming at them from the “East” (right) side of the installation: Route 66 architect Cyrus Avery and his family driving their Model T down Route 66.

The detail is of the piece is stunning; the flare of the horses' nostrils, the flail of their manes and the strain of their haunches as they jump at the sight of Cyrus' model-T is matched by the elaborate wood grain of the wagon and the distinctly disheveled, thrown-together visage of the buggy driver. The Model-T looks so real you could almost drive it. The vivid looks of surprise, alarm, and annoyance on the faces of Cyrus and his family are a sharp contrast to their staid, monied deportment. This contentious meeting of old and new, businessman and wildcatter, money and sweat, is a brilliant depiction of the cultural and economic shifts that would soon rock Tulsa as the oil boom ushered in the era of the automobile, thus setting the tone for Tulsa's automobile-centric urban planning for the rest of the 20th Century.

Also known as the Will Rogers Highway, and colloquially as “The Mother Road” and “Main Street, America,” U.S. Route 66 was one of the founding thoroughfares of the U.S. Highway System. 400 miles of Route 66 traverse Oklahoma, making it the longest continuously drivable stretch of the road in any state between Illinois and California. Route 66 was a major gateway for western migration, especially during the Dust Bowl of the 1930s. Towns along this epic thoroughfare received immeasurable economic support from travelers along The Mother Road.

Prior to the states' adoption of the numbered U.S. Highway system, private organizations maintained private auto trails. Route 66 was built from large sections of four of these private trails. The Lone Star Route passing through St. Louis from Chicago to Cameron, LA was re-routed through Bloomington, Indiana instead of Peoria, Illinois. The New Mexico to California section of the National Old Trails Road between St. Louis and Los Angeles was also added to Route 66. The stretch between St. Louis and New Mexico was pulled from one of the main routes of the Ozark Trails system, and from the Postal Highway route between Oklahoma City and Amarillo.

One major motivation for building Route 66 was that rural communities and small towns in middle America had no access to a major national thoroughfare. The passage of legislation in 1925 paved the way for a national highway system. Immediately after the act was passed, entrepreneurs Cyrus Avery of Tulsa and John Woodruff of Springfield, Missouri, lobbied the American Association of State Highway and Transportation (AASHTO) to include a highway through America's heartland into the plans. Avery went on to form the U.S. Highway 66 Association to promote the road for tourism and industry, going so far as to sponsor the “Bunion Derby,” a footrace from Los Angeles to New York City, the western half of which followed Highway 66. He also advertised Route 66 as the best route for American sports fans to take in traveling to the 1932 Olympics in Los Angeles. Through Avery's tireless efforts, Route 66 was firmly established as “Main Street, America” within a decade of its construction.

Route 66 fell into decline in the 50's & 60's after the Eisenhower Interstate Highway system and cheap air travel displaced Route 66 as a major road. Sections of the road were ripped up, incorporated into the new Interstates, or otherwise disconnected from the original path. But the small towns and cities who'd benefited from the legendary Mother Road fought to keep her alive. Oklahoma was the first state to install historic markers and have a state-sponsored Route 66 museum. Taking a cue from neighbor states Missouri and New Mexico, Oklahoma designated the highway as a State Historic Route, making it a public cultural resource eligible for federal preservation grants and funding. Most recently, Tulsa became eligible for grants of $5,000-$30,000 from the National Parks Service for preservation and interpretive signage along the Tulsa portion of Route 66.