Farmington No. 9 Mine Memorial

The memorial honors the 78 miners killed in an explosion on November 20, 1968. 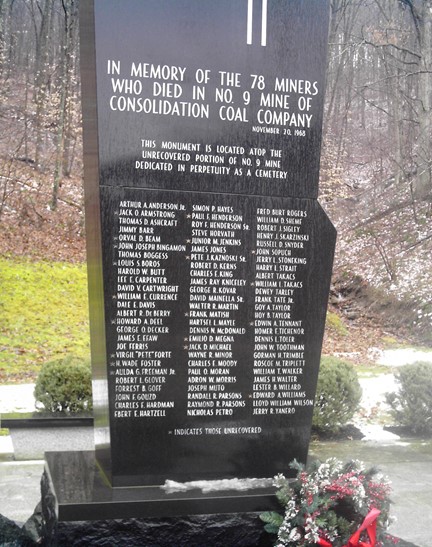 On November 20, 1968, a catastrophic explosion rocked the Consol No. 9 coal mine outside of Farmington, West Virginia. Seventy-eight miners perished in that accident. While the cause of the explosion was never determined, it served as a catalyst for a series of landmark mine safety laws that were passed to protect miners.

In 1968, 311 coal miners lost their lives in work-related accidents. Another 182 miners were killed in metal and nonmetal mining accidents. And annual mining fatalities continued to be measured in the hundreds for more than a decade.

Mine safety has improved significantly since then, not only because of the laws and regulations that were passed, but also because of the efforts of industry and changing mining practices. These days, total mine fatalities are measured in the low double digits.

The list of those who died are as follows (an asterisk ( * ) indicates the unrecovered):