The First Light of Freedom Monument

The First Light of Freedom monument honors the memory of the Freedman's Colony that existed on Roanoke Island from 1862 until 1867. The Island became a place of solace for slaves who were considered contraband of war when the Union army gained occupation of the island and to those slaves who escaped the grasp of their masters. While historians are unaware of the exact location of where the Freedman's Colony once thrived, this monument serves as a reminder of the first, and largest, community of its kind in the state of North Carolina. The monument itself is located just outside the Visitor's Center at Fort Raleigh Historic Site. 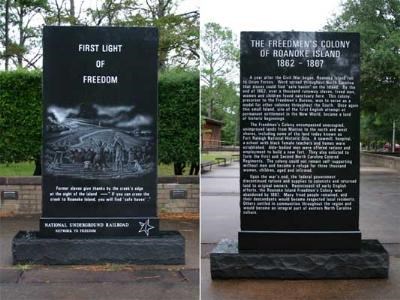 In 1862, Roanoke Island, just off the coast of North Carolina, became occupied by Union forces. Prior to the occupation, the Confederate Army used the outlying islands as prime real-estate for fortifications and sent slaves to the island to build these forts. After the fall of Roanoke, these slaves were emancipated by the Union Army.

The message of a safe-haven for African American peoples spread, and escaped slaves came by the hundreds to the Island. Their new lives began as employees for the Union Army completing tasks as carpenters, Blacksmiths, cooks, and other positions valuable to the upkeep of Union forces. However, in 1863 the numbers of African Americans living in the community grew so high that the United States government stepped in.

The Federal government established the island as an official Freedman’s Colony late in the year of 1863 and as the National Park Service describes, “settle the colored people on the unoccupied lands and give them agricultural implements and mechanical tools…and to train and educate them for a free and independent community.” Then, in 1865, the population of the island grew to almost 3,500 former slaves. Eventually, with a growing population at hand, the need for churches and schools became apparent and the American Missionary Association supplied the need for educators to the colony with seven teachers.

Unfortunately, the success and progress of this community was short lived as a government order at the conclusion of the Civil War gave the rights of the lands back to the original owners. While the Black residents of the island were not immediately pushed off the land, government food rations and limited resources led to the end of the people’s prosperity. Through 1866 only a few residents remained and finally in 1877 the colony was decommissioned by the United States Government.