This is a contributing entry for CVB Downtown Historic Buildings Walking Tour and only appears as part of that tour.Learn More.

The A.C. Smith Building was built in 1894 and named after its patron, A.C. Smith. Smith was a local merchant who was well-established in the broader Clarksburg community. From 1895 until the 1930s, the building housed the Smith, Brown, & Company Dry Goods Store. Since then the structure has been rented to a number of local businesses. Architecturally, the A.C. Smith Building is remarkably ornate. Though the palette is confined to a deep muted blue, almost every free inch of the façade is covered in Italianate leaf moldings. Bounded in the top cornice are letters spelling “A.C Smith.” The first-floor storefront has been slightly altered over the years, though the upper floors appear the same as they did in the early twentieth century. 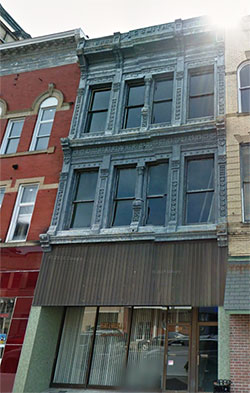