The Bethel AME Church In Reno, Nevada was a staple in the advancement of African Americans in Reno religiously, politically, and socially. This location served as a community meeting ground when African Americans initially moved west in the 1910s and then served as a power seat in the community for civil rights leaders in the 1960s. The Bethel AME church in Reno currently operates, and serves its people to increase their sense of dignity and self respect therefore fostering societal participation and work to fight discrimination.

The outside of the church has remained mostly unchanged over the years. 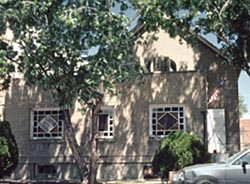 Ever since its formation the Bethel AME Church has been deep rooted in the belief that even in the face of discrimination members must show dignity of themselves. This falls in line with its history of powerful leaders that wanted to empower the community such as Rev. Emmer Henry Booker who renovated the church so it would serve as a community center.
Although there was no legislation that proved segregation and Jim Crow laws existed in Reno, the town certainly practiced segregation. African Americans were denied housing, employment, and service in public businesses. The communities discriminatory ways led the members of the Bethel AME church to lead NAACP branch activities such as picketing of stores that would attempt to deny them service. The Bethel AME Church is a historic landmark that shows the power of the community and the steadfastness that African American people had to maintain to work towards modern civil rights.