The Spectrum, home of the Philadelphia 76ers and Philadelphia Flyers was open from 1967 to 2009. The 18,168 seat capacity arena held many events apart from the sports related fields such as an Elvis Presley, Bruce Springsteen, and Pearl Jam concert. The arena even held boxing fights including Mike Tyson. Although the building was demolished in 2010 under the name “Wachovia Spectrum” and replaced with a parking lot, the special memories held within its walls will be remembered forever.

The Spectrum was one of the first modern sports arenas in the Philadelphia area and was home to The Flyers and The 76ers. 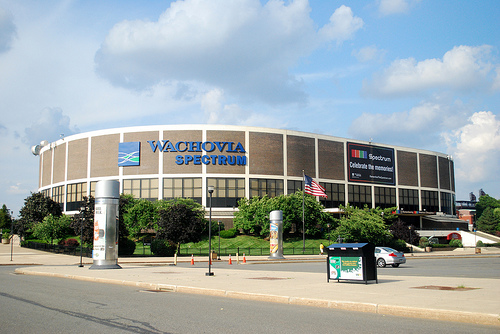 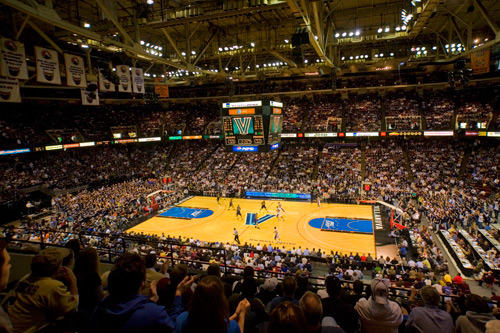 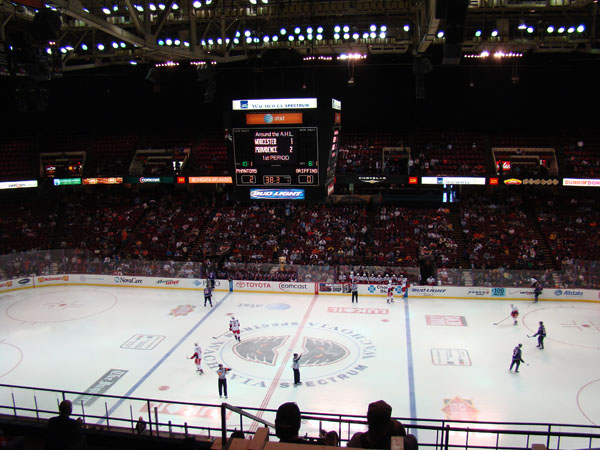 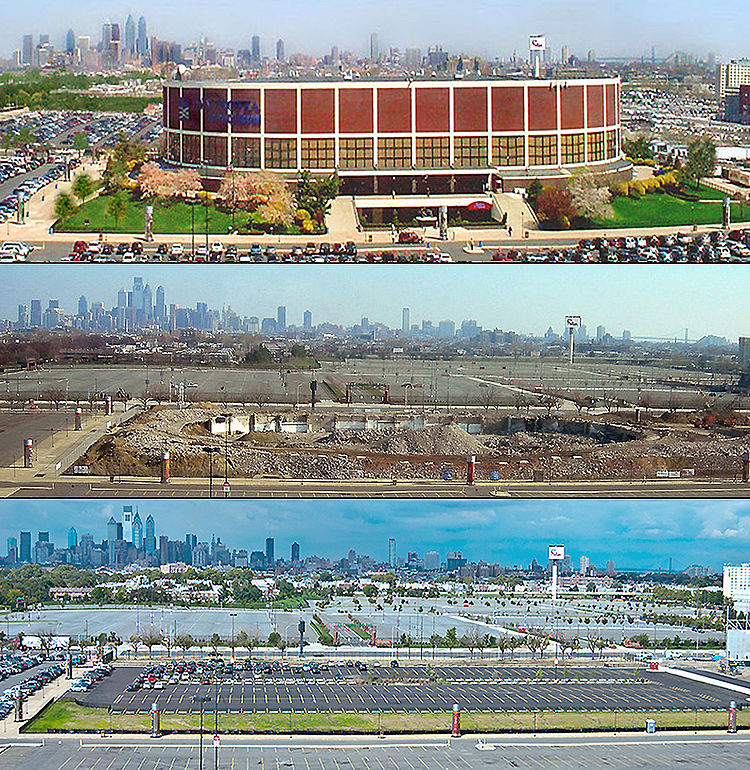 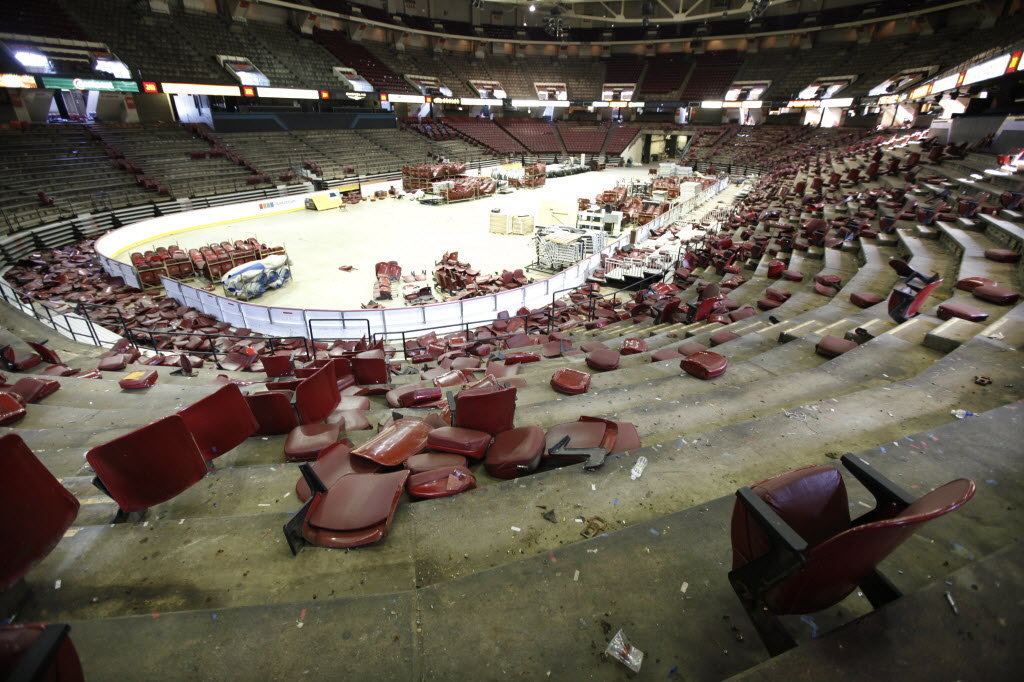 The Spectrum arena was built on September 30, 1967, at the cost of $7 million for the Philadelphia 76ers and Flyers. Both teams were able to use the field for almost thirty years. In 1996, the Wells Fargo Center opened its doors and both the Flyers and 76ers followed. The Wells Fargo Center is still the current home for these professional teams. The Spectrum arena, however, was also home to the Philadelphia Wings (NLL), Kixx (NPSL), and Phantoms (AHL). Many well-known athletes played at the arena such as Julius Erving, Maurice Cheeks, Wilt Chamberlain, Hal Greer, Bobby Jones, and Billy Cunningham. Each of these had retired numbers held at the arena. The arena held other important events unrelated to Philadelphia organizations such as the NHL and NBA All-Star Game of 1976, or the 1992 NCAA East-Regionals (Duke vs. Kentucky). This 1992 Regionals game is arguably one of the most memorable games ever. With two seconds remaining, Christian Laettner makes a shot near the foul line to inch the Devils ahead of the Wildcats at the buzzer.

Aside from holding sporting events, the Spectrum is considered one of the busiest arenas, hosting over 600 events. Some of these events include Elvis Presley’s last live appearance (May, 28, 1977), Bruce Springsteen's eight sold-out shows (1981), Billy Joel (1993), and the fights of Mike Tyson vs. Buster Mathis Jr. (Dec. 16, 1995) and Joe Frazier vs. Tony Doyle (Oct. 17, 1967). Many artists like Johnny Cash and ACDC performed here as well. Even the Rolling Stones appeared with Stevie Wonder on July 21-22, 1972.

In December of 2010, demolition of the Spectrum Arena began. The Pearl Jam concert (Oct. 31, 2009) was the last event held in the arena. Before demolition, however, Comcast-Spectacor (owner o, the Spectrum) saved pieces from the facility and has been attempting to sell anything it could from seats, bricks, and freezable coasters.

The Spectrum, known to the world as “America’s Showplace,” was an indoor arena in Philadelphia, Pennsylvania which opened its doors in the fall of 1967. The Spectrum was home to the Philadelphia Flyers and the Philadelphia 76ers, and also included many minor league clubs. After several expansions, the arena accommodated 18,168 spectators for basketball and 17,380 for ice hockey which was exceptional for this period. The Spectrum hosted many in-famous sports events throughout its lifetime. Hosting Multiple NBA All-Star games, NBA Finals games, NCAA Men’s Division 1 Basketball Tournaments, NHL Stanley Cups Finals, NHL All-Star Games along with many more iconic sports moments.

Before the construction of the Spectrum, the city of Philadelphia had many architectural downfalls. The region was known to be very wet and swampy which meant there wasn't much real estate to build a solid foundation. The history goes back as far as the mid-1800s. In 1868, roughly 100 years before the construction of the Spectrum the Navy Yard was established. The Navy Yard brought many jobs and opportunities for local Philadelphians, yet the surrounding areas remained very swampy and difficult to build on therefore leaving the land around the Navy Yard unused. During this period, Philadelphia was not what we know it to be today. Philadelphians lived in a very rural landscape, but many architects thought it had tremendous potential. In 1912, after many attempts to build prominent structures in Philadelphia, the city hired a landscape architecture firm Olmsted Brothers. Their mission and goal were to produce designs for a National Park which included the land where the Spectrum stood. The land required a complex drainage system to allow water in the park to drain. They used the water drained to create lagoons and ponds that remain intact today. The area finally saw the end of the tidal marsh and channels when the Olmsted Brothers installed a floodgate. The park became a refuge for many animals because of the massive development of the surrounding area.

The Sesqui-Centennial Celebration commemorated the 150th anniversary signing the Declaration of Independence was another monumental milestone in the development of the Philadelphia area. The New York Times released an article named “Bad Site Hampered Sesqui” due to how unappealing the Philadelphia area was during that time. The mayor at the time Joseph Hampton Moore didn't prepare much for the celebration. Later that year, Moore was succeeded by Freeland Kendrick who was a businessman and made a big deal out of the celebration. Many people doubted Mayor Kendrick would have Philadelphia ready for the celebration which was only three years away. Before major construction could continue thousands of tons of dirt was dug from what is now called Broad Street subway and dumped in nearby marshes. Constructors had to dam creeks, create lagoons, stop natural springs from flowing. After the land was solid enough to build on construction began immediately. Streets were paved, sewer, water, and electric lines were installed. This is another huge milestone in the development of the land the Spectrum was built on.

World War Two brought a tremendous amount of development to the Naval Yard which directly affected the surrounding area. The war caused oil refineries, factories, and housing to be built for the sailors working at the Naval Yard. Two of the largest dry docks in the world were built in Philadelphia. Towards the end of the war 48 new warships were built, 41 converted, 574 repaired, and 650 ships completed. The Naval Yard added the Naval Aircraft Factory and propeller factory was built. President Franklin D. Roosevelt promised a 4 million dollar expansion funds which would include 1,000 low-cost housing units and 11,000 new jobs. At this point, Philadelphia showed a lot of promise and was turning into a highly industrial area hence making the area a desirable for people to live.

Although this major development period occurred decades before the construction of the Spectrum, it was essential for these processes to happen because it created the community the Spectrum resided in. The broad street became the center point of the city. North of Broad Street was becoming very industrial and South of Broad St becoming very residential. During the early 1960s, the NHL allowed an expansion hockey franchise for 2 million dollars. Philadelphia had a contest called “Name the Team.” The winning name was the Flyers. Now with a new franchise formulating, the owners sought out a place to build a brand new stadium. The South Philadelphia area still have undeveloped land and seemed like the perfect place to build an arena. During the construction, they ran into many problems with the land being low lying, muddy and just over difficult to build on. Developers had to bring in tons and tons of dirt and cement ensuring that the ground was solid. Although they ran into these problems, the stadium was finished in 16 months at of a total cost of 7 million dollars. The Spectrum was Philadelphia’s first modern sports arena and was built to be multifunctional.

The first event held at the Spectrum was a jazz festival on September 30, 1967, which sold out in two days. People loved that the seats were comfortable and had a lot of legroom. The first three sporting events all started out with wins for the locals. The first event was a boxing match between Philadelphia native Joe Frazier and Tony Doyle which ultimately ended with Frazier winning by a knockout. The following day the 76ers won their first game 103-87 beating the L.A. Lakers. The next day the Flyers beat the Pittsburgh Penguins 1-0. Although the teams started their seasons off victorious the first year the Spectrum was open they experienced many highs and lows. The 76ers and the Flyers were moving into their new state of the art facility and concerts were being held. The arena looked very promising, but the Flyers were not very good and didn't sell out games. One thing that happened early on in the opening months was a giant piece of the roof blew off leaving a giant hole. No one was hurt in this incident, but local politicians forced the Spectrum to close their doors which were rough because they had only been open a few months and was already in financial trouble. For the rest of the season, the Flyers played their home games at Madison Square Garden, and the 76ers moved back to their old arena Conventional Hall. The estimated cost to fix the roof was 75,000 dollars which owners of the Spectrum could not afford so they sought out help from the bank. The Spectrum was bankrupt from opening to 1971.

On January 1, 1972, the Flyers board of chairman, Ed Snider, and other donors came up with 11 million dollars to take the Spectrum out of debt. Unlike other stadiums in the area during that time The Spectrum depended on making a profit to survive. Adding a third level allowed the Spectrum to accommodate more fans for both hockey and basketball. In 1974, the city of Philadelphia would get a glimpse of what the future of what the Spectrum would become. The Flyers got the nickname “The Broad Street Bullies” because of their aggressive style of play. That year the Flyers made it to the Stanley Cup Finals and faced the Bruins. They ended winning in game six at the Spectrum. The following year they beat the Islanders to capture their 2nd Stanley Cup in two years. The Flyers beat the odds in formulating a championship team within a few years. This was a monumental event in the history of the Spectrum and has left its mark in history.

For the 76ers it took more time for them to make their impact on basketball. In 1976 they acquired Julius Erving and made the NBA Finals but lost to the Trailblazers. The following year the 76ers lost again in the championship but making two finals appearances in back to back years is an accomplishment. They finally got their first championship after defeating the LA Lakers in the 1983 season. Philadelphia sports teams had reached the height of their success in the late 1970s and early 1980s in making and winning multiple championships.

There is a long history involved with the overall growth of the Philadelphia area. Many people were indirectly responsible for the establishment of the Spectrum. For Decades the Spectrum was home to Philadelphia’s sports fans and brought with it spectacular memories. With the development of new innovative and state of the art arenas, the Spectrum lived a short life of 27 years. Over the course, next few decades the name of the stadium was changed ever so often until the building was officially demolished on November 8, 2010. They conducted a “Wrecking Ball Ceremony” in which some of the halls of fame athletes attended. Athletes that were in attendance were Bernie Parent, Bob Clarke from the Flyers and Julius Erving from the 76ers. The demo took a little less than a year because they did not use any explosives. The space is now a 300 spot parking lot.