Mt. Olivet was consecrated in 1895, becoming the more desirable Catholic cemetery over the original Calvary Cemetery. Mt. Olivet is one of the few cemeteries in St. Joseph that has headstones with porcelain memorial portraits that became particularly popular in the 1920’s and 30’s. Notable burials include Joseph Robidoux and his family. 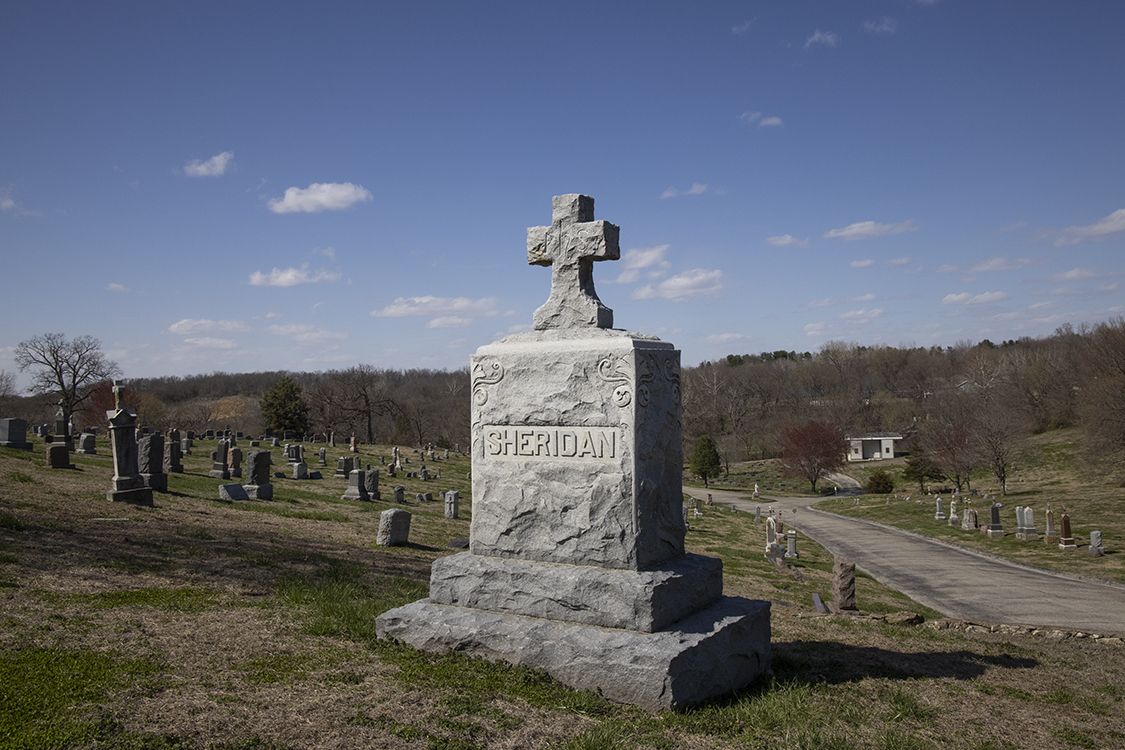 Over the course of St. Joseph’s history, the Catholic community has been served by 2 cemeteries: Calvary and Mt. Olivet. Only Mt. Olivet is still in existence.

In 1894 Bishop M. F. Burke of the St. Joseph diocese purchased land on Lover’s Lane for a new cemetery stating that “the location of Calvary has never been desirable.” The new Catholic cemetery was consecrated on May 30th, 1895 with Frank Browne, an early settler of St. Joseph, being the first interment. Many families began moving their loved ones from the old Calvary Cemetery to the newer, more desirable, Mt. Olivet.

The most notable, and perhaps dramatic, reinterment was that of Joseph Robidoux and his family in 1908. Heavy rains first delayed progress, then the lack of headstones or records made it necessary to excavate the entire lot. After digging all day on August 13th, workers were left with more questions than answers. The metallic coffin that was described in accounts of Robidoux’s funeral in 1868 was not located. One grave was found to be empty, while another contained two skeletons. Two days later the St. Joseph News Press ran the article “Soon Will Have Body- Grave of Joseph Robidoux is Probably Found.” but heavy rains again halted progress. After exhuming everyone from Robidoux’s plot and failing to locate the metal casket, exhumations were extended to neighboring plots. By the 22nd all who had been exhumed in the search for Robidoux had been moved to Mt. Olivet, but the metal casket had still not been found. No further updates were given.

The last burial took place at Calvary Cemetery in April of 1910, after which it fell into a state of utter neglect. Nearly 50 years later, Bishop John P. Cody of the Catholic diocese of Kansas City-St. Joseph asked for Calvary Cemetery to be vacated fully. By 1963 the Calvary property was sold to the Steele Trucking Co. and all burials uncovered during the grading work were reburied in Mt. Olivet. The land was ultimately never developed and remains an empty field.

Not suffering the same fate as Calvary, Mt. Olivet is still in active use and kept beautifully. Covering nearly 49 acres off of both the Parkway and Lover’s Lane, Mt. Olivet’s winding paved paths make for a wonderful afternoon walk. The gothic Horigan Memorial Chapel is particularly striking. Mt. Olivet is one of the few cemeteries in St. Joseph that has headstones with porcelain memorial portraits that became particularly popular in the 1920’s and 30’s.