King Hill Cemetery is the largest cemetery still serving the south end of St. Joseph. King Hill contains burials dating back to the early 1840’s, and is still in use today. Notable burials include Revolutionary War, Civil War, and War of 1812 veterans, and relatives of explorers Lewis and Clark. 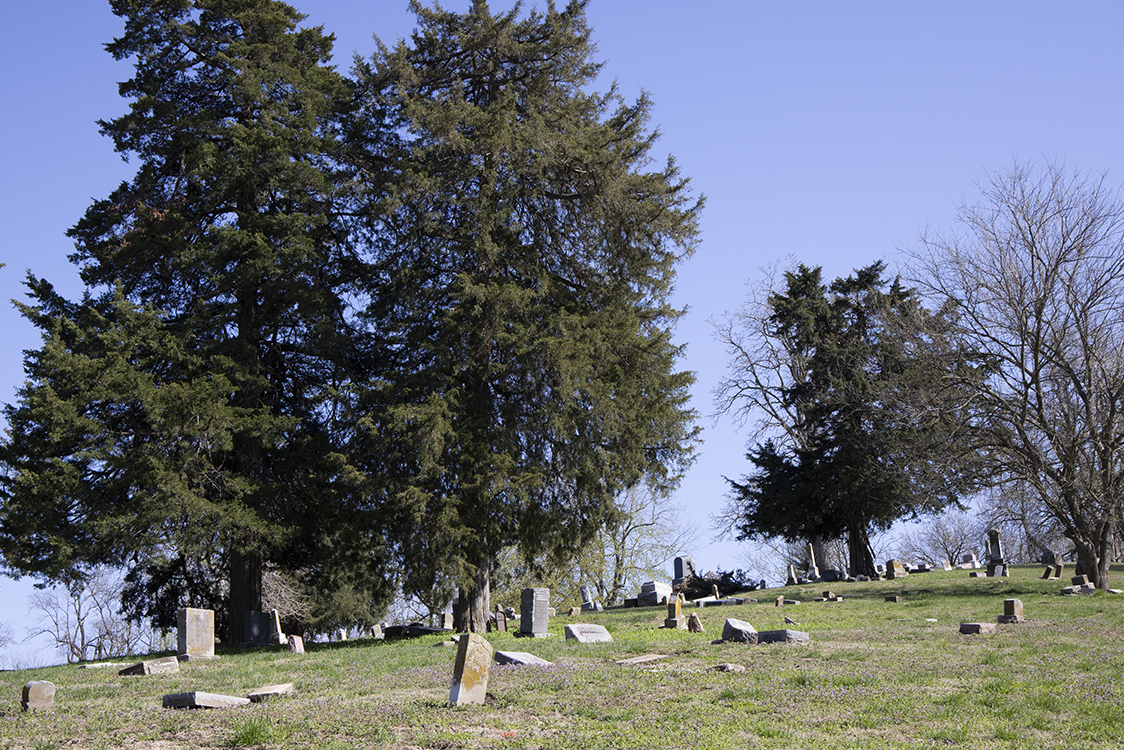 King Hill Cemetery is the largest cemetery serving the south end of St. Joseph with over 2,000 interments. King Hill contains burials dating back to the early 1840’s, and is still in use today. One of the earliest burials within the cemetery is that of John Davis, a Revolutionary War veteran who died in 1844. Davis enlisted in the spring of 1775 while residing in William County, Virginia and served as a private in the Virginia Continentals. Davis moved to Buchanan County in 1843 and died of old age shortly after arriving.

King Hill Cemetery got its start like most of the cemeteries in the county did, as a small private family burial ground. In 1868 the King Hill Cemetery Association was formed and the land was held by 16 people, most of whom had ties to the earliest burials at the cemetery. This first association of the cemetery only covered about 4 acres, but over the years more land has been added and it now covers 24 acres of King Hill.

The burials within King Hill Cemetery are just as diverse as the South Side has always been. The cemetery contains veterans from three centuries of American wars, relatives of Lewis and Clark, immigrants from all over the world, packing house laborers and business owners.

King Hill also represents the most well documented Native American excavation site in the city of St. Joseph. Prehistoric tribes populated the area where St. Joseph now exists and by the time Joseph Robidoux settled in the area, the Ioway, Sac & Fox, Kansa, Kickapoo, and many others utilized the area for trading, resulting in Robidoux’ prosperity and the growth of the region. The Platte Purchase removed these tribes to reservations across the Missouri River in the Kansas territory and the legends of their people became integrated into the American society which migrated to the northwest of the state.

Robidoux told of the myths and legends of the various Native American burials grounds across the newly founded city, including a great battle which he alleged took place on King Hill. Local author, Mary Alicia Owen, perpetuated the legend of the Road to Paradise which deemed the area of St. Joseph a meeting ground where all Native American tribes would bring their elderly, sick, and dying to cross the “Sunbridge;” where the setting sun touched the Missouri River to the “Happy Hunting Ground” of the afterlife.

These myths arose from the numerous burial mounds located throughout the city. As the city developed, more and more artifacts and remains were unearthed. King Hill is perhaps the most well documented archaeological site with digs occurring throughout the twentieth century. Items collected from dig sites across Buchanan County were donated to the St. Joseph Museums, Inc. as a repository of archaeological research. As the museum receives federal funding, it must comply with the Native American Graves Protection and Repatriation Act which requires consultation and repatriation of burial remains and associated funerary objects to their associated tribes. As such, these sites are protected to avoid further disruptions of burials.