The Augusta-CRSA Vietnam War Veterans Memorial was dedicated on March 29, 2019, National Vietnam Veterans Day. The monument lists the 169 service members of the Augusta area killed during Vietnam, as well as the three area prisoners of war, 1 missing in action, and 1 female service member killed. The memorial also honors the 15,000 Vietnam veterans living in the Augusta area. The monument was erected by the Augusta Chapter of the Military Order of the World Wars.

Completed memorial with the Soldier's Cross 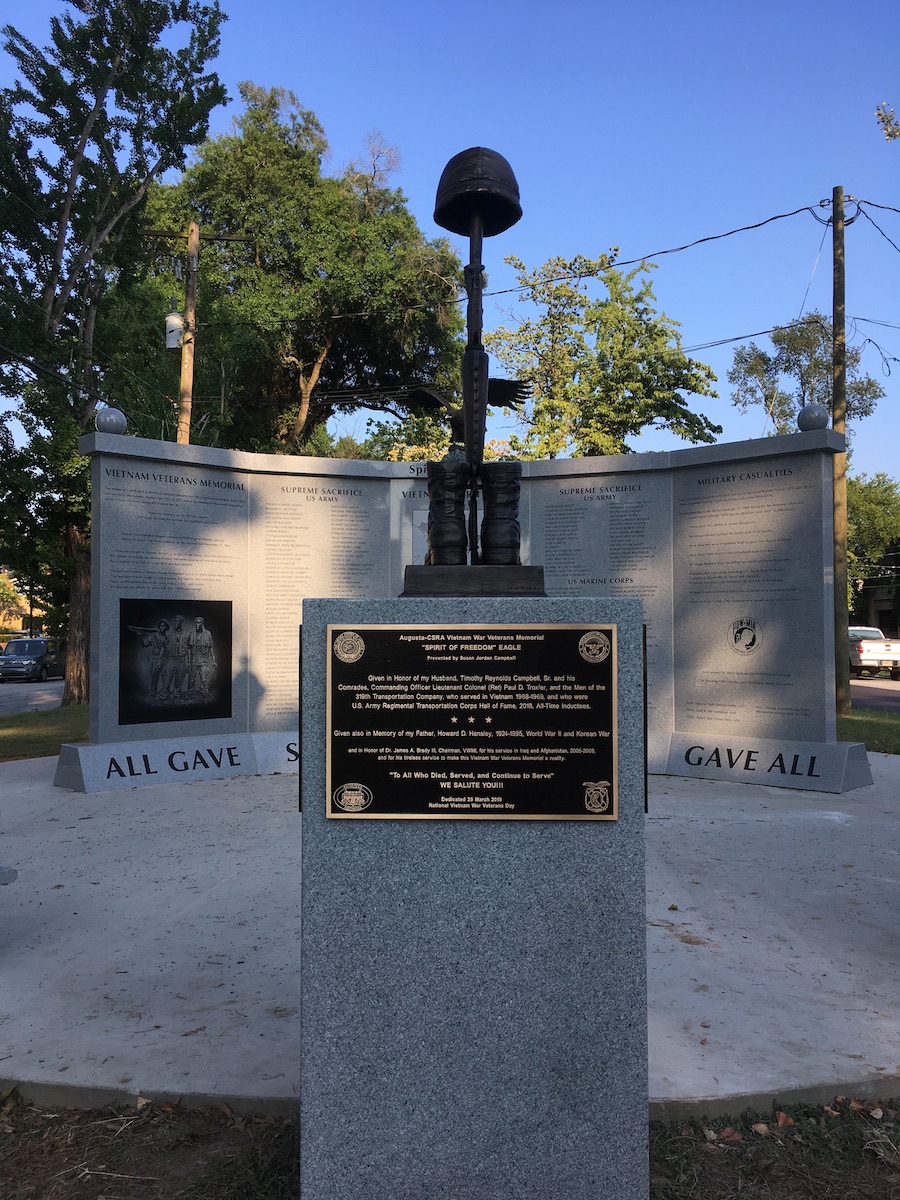 Front of memorial (at time of dedication) 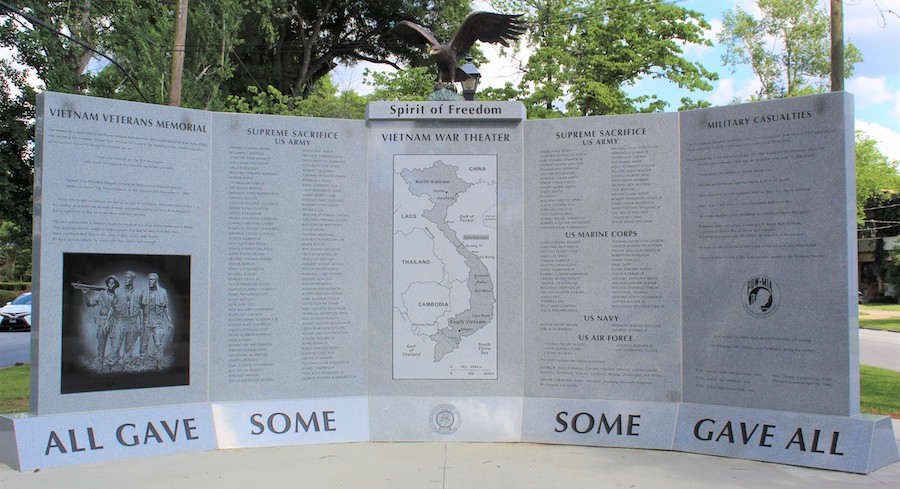 Back of memorial (at time of dedication) 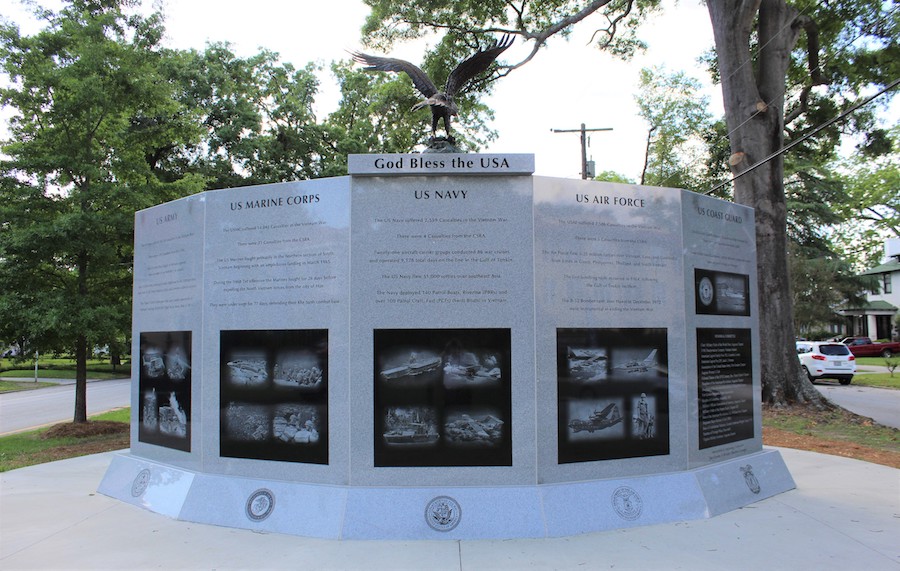 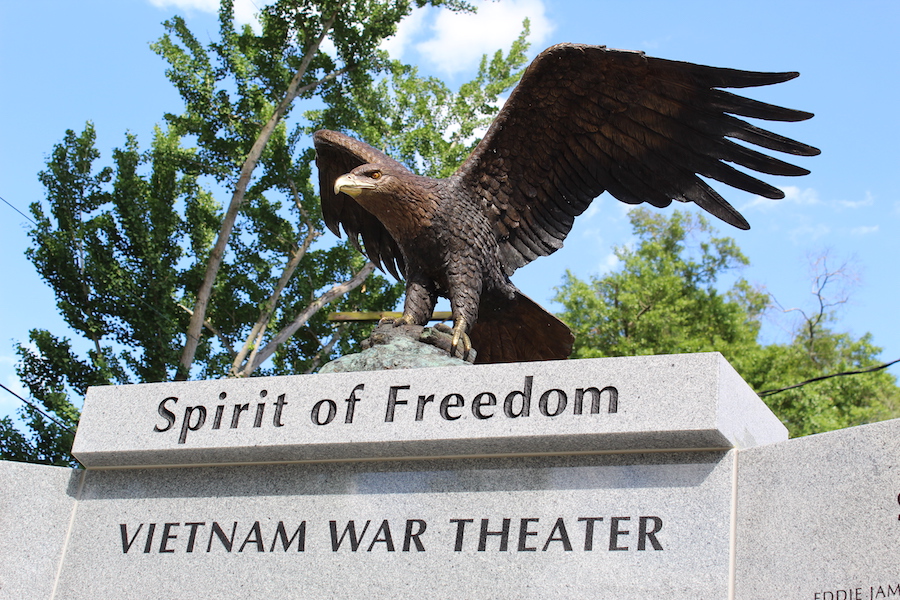 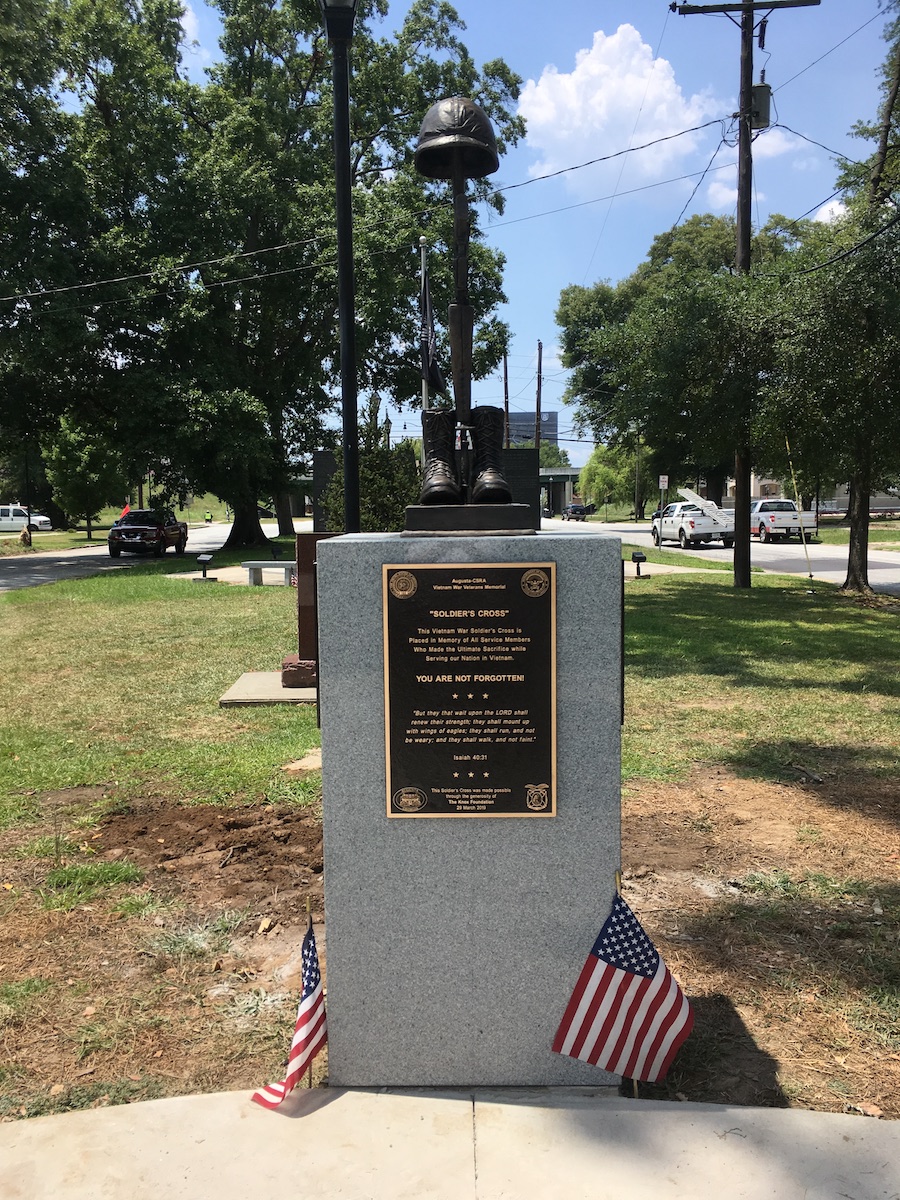 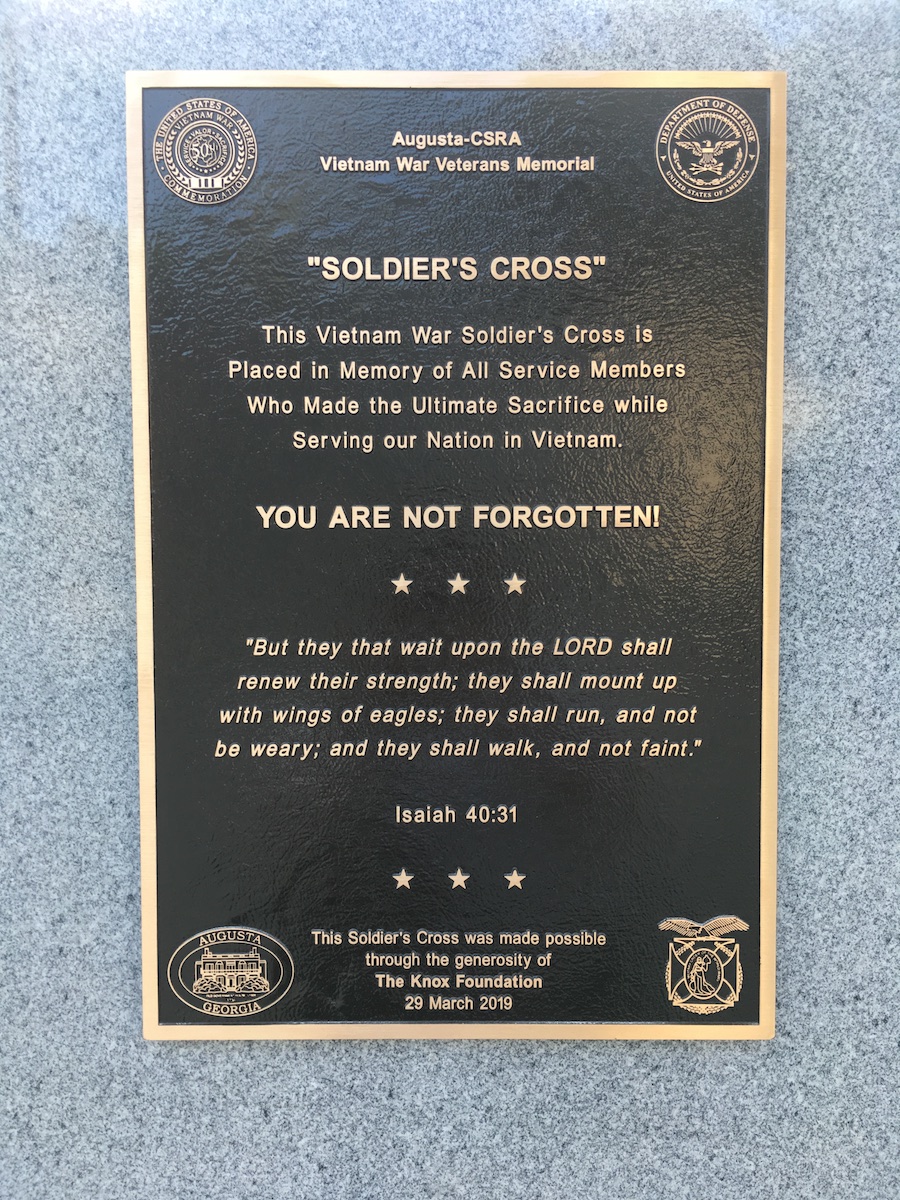 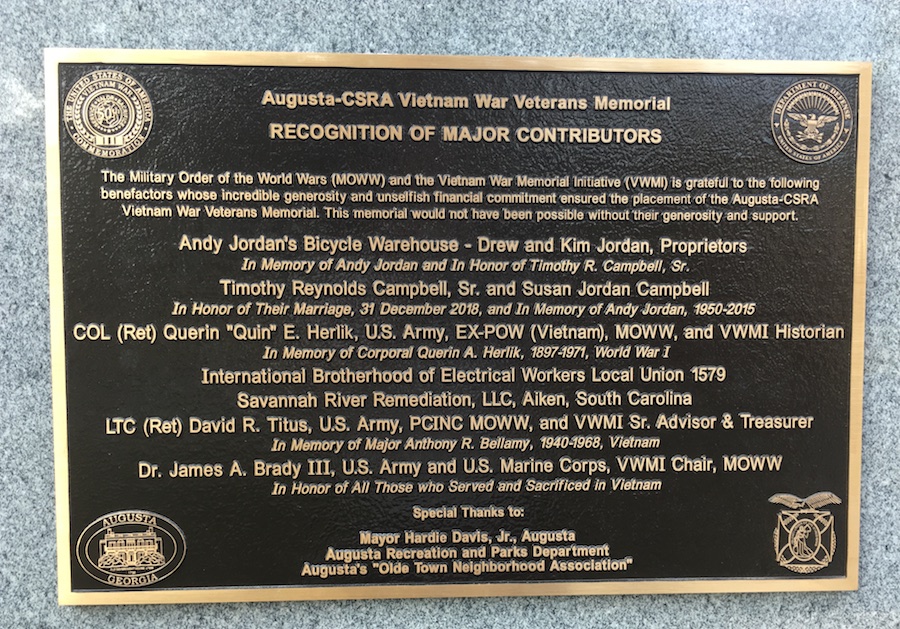 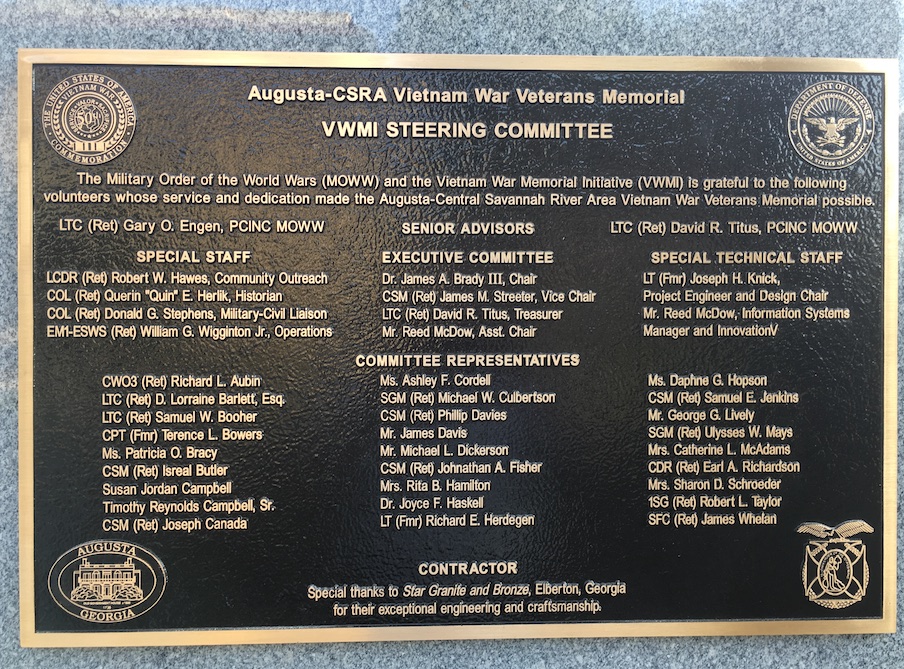 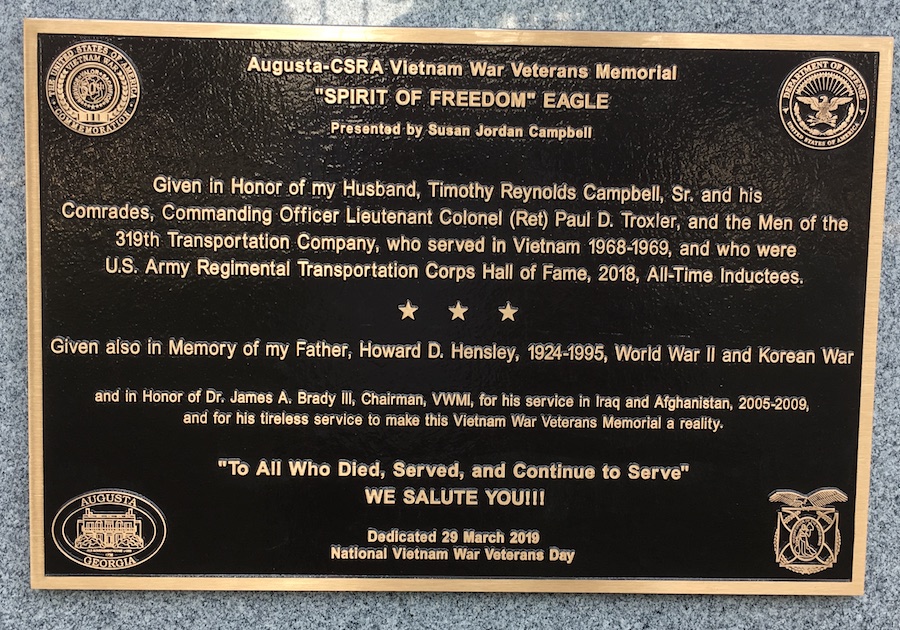 The front of the monument lists the names of the area’s Vietnam War casualties along with a map of Vietnam and an engraving of the “The Three Soldiers” statue on the National Mall. The front of the monument also includes a quote from Ronald Reagan’s 1984 dedication of the “Three Soldiers Statue” in Washington, D.C. The back of the monument includes information, images, and statistics for the five military branches that served in Vietnam along with the local organizations that partnered with the Augusta Chapter of the Military Order of the World Wars to erect the memorial. The solid bronze eagle on top of the monument weighs 220 pounds, stands 3.5 feet tall, and has a five-foot wingspan. The eagle was purchased by a single donor and manufactured by a California company.

The main monument cost about $62,000 and was done by Start Granite and Bronze in Elberton, GA. This was dedicated in a ceremony on March 29, 2019. The keynote speaker Major General James E. Livingston of the US Marine Corps (ret.) who received the Medal of Honor for actions in South Vietnam in May 1968. The ceremony also included a display of vintage military vehicles, performances by the Fort Gordon Joint Service Choir, bagpipes performed by Georgia Military College personnel, a poetry reading of a piece honoring service members killed in action, a three-volley salute, and the playing of Taps.

The memorial was completed in August 2019 with the addition of the Vietnam-era Soldier’s Cross monument and granite pedestal. The pedestal holds four bronze plaques recognizing members of the Steering Committee and major donors. Four engraved benches were added to the memorial and the final mantel pieces of the main monument were also placed in August. The total cost of the memorial was just over $100,000.

The initiative to erect a Vietnam War monument in Augusta was led by Dr. James Brady of East Georgia State College who felt that Vietnam veterans had not been properly recognized for their service in the decades after the war. While living in Augusta Brady noticed that the majority of veterans participating in memorial ceremonies were Vietnam veterans, but they did not have their own monument or memorial to recognize their service. Dr. Brady served as the Chair of the Vietnam War Memorial Initiative Steering Committee.

Several local organizations donated and raised money for the memorial among their communities: the Sons and Daughters of the American Revolution, the Augusta Chapter of Military Officers Association of America, Association of the United States Army (Fort Gordon Chapter), Fort Gordon Sergeants Major Association, the American Legion, Veterans of Foreign Wars, and the Augusta Woman’s Club. The Vietnam War Memorial Initiative also collected individual donations with eight businesses and individuals recognized on a bronze plaque for donations of $5,000 or more.