This is a contributing entry for Public Art and Commemoration in Santa Barbara and only appears as part of that tour.Learn More.

Across from Ambassador Park, near West Beach in Santa Barbara, California, a 20-foot-wide mosaic sits on the village site of Syuxtun (also spelled Syuxhtun), the largest Chumash settlement spanning all of the Chumash lands. The story circle features 21 separate panels, depicting aspects of Chumash religion, history, present, and future. The mosaic was a community-based project, emphasizing the importance of togetherness and connection through time and space. 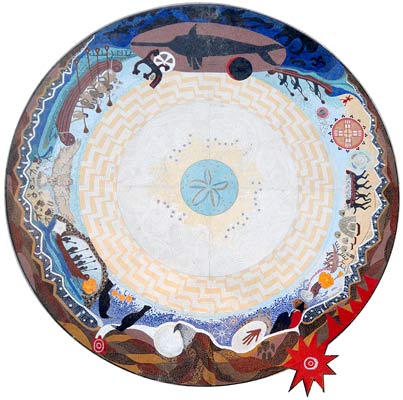 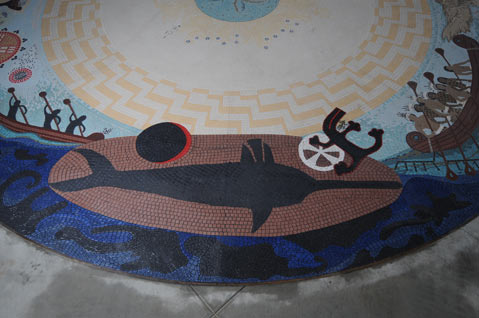 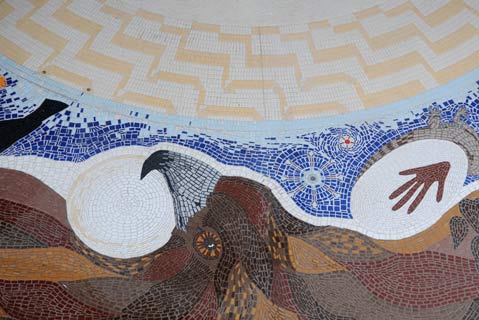 'Elye'wun Tomol in 2001 Returning to Limuw 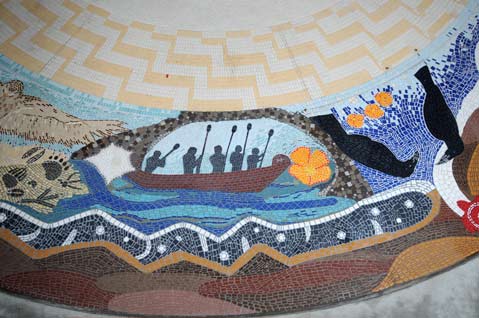 The Syuxtun Story Circle is a mosaic marking Syuxtun (Chumash for “it forks” or “where the two trails run”), also spelled Syuxhtun, the largest Chumash settlement spanning all of the Chumash lands--between Malibu, the Channel Islands, and Paso Robles. The mosaic is 20 feet (6.6 meters) wide and comprises over 200,000 unglazed ceramic tiles. It took 5,000 collective hours by over 200 members of the Chumash community between July and October 2009. It was a collaborative project, with family and friends. Chumash elders, in their eighties and nineties, also participated, which made it an even more meaningful celebration of not only Chumash resistance to colonization but also of the continued success and community of the present and future.

The Chumash know the history of the 9,000 year history on the land that is now known as southern California through oral history, meaning that is passed down from generation to generation.

There is also ample archaeological evidence that the Chumash lived on the Santa Barbara coast for 9,000 years.  The earliest written record of Syuxtun comes from Juan Rodriguez Cabrillo in 1524, noting the settlement (which he called Puerto de las Sardinas) was a regional capital and had a female chief of the areas now known as Santa Barbara and Point Conception. Cabrillo spent three days at Syuxton, and the chief and some other villagers slept on board Cabrillo’s ship. Other Europeans came to and wrote about Syuxtun in the seventeenth and eighteenth centuries, including Geronimo Martín Palacios in 1603, who noted the oak groves above plains and cupped pines. Portolá’s expedition passed within “two rifle shots” of the town, noting that there were at least seven hundred individuals living there in 1769 and that the Chumash had given them 700 pounds of fish. In de Anza’s expedition in 1776, they met Yanonali who mentioned the Spanish were in the process of building the Santa Barbara Presidio (that would be completed in 1782). On an expedition in 1793, John Sykes noted that Syuxtun only had 150 individuals. Because of changes in the land through Spanish, Mexican, and US colonization in the land now known as Santa Barbara, there are few markers visible of Syuxtun available today. This is why the Syuxtun Story Circle is important--it is a visible marker of Chumash history whose community refuses to let it be lost.

All of the images, while beautiful, are also meaningful in Chumash history and culture. They work together to represent Chumash history for future generations through the mosaic. The Chumash speak of a great deluge engulfing the Earth, drowning all living things except the Spotted Woodpecker, who you can see near the red star on the edge of the circle. He was the nephew of Kapqunupenawa, the Sun God. By perching on the tallest tree, he called for his uncle to save him, who provided him with acorns to eat.

After the flood, Kapqunupenawa, the Morningstar, the Moon, and Slo'w the Great Eagle, whose large wings are embracing the circle, discussed with the Sky Coyote the creation of a new people and could not decide on how they should look. Both Slo'w and the Sky Coyote argued that these beings should be in their particular image. When it was decided that Sky Coyote could press his hand into a white rock to take his hand print as a model, silent observer Lizard jumped forward and provided his own. Everyone approved of Lizard's handprint, also featured in the mosaic, which is why human handprints are very similar to his.

The Story Circle features four sea-worthy boats, known as tomols (sewn-plank Coast Redwood boats, made seaworthy with asphaltum and pine pitch), which was, and still is, used by the Chumash to access other Chumash communities, including the Channel Islands. Each depiction symbolizes a different Chumash experience with tools. For example, the tomol filled with fish shows Chumash abundance of both community and resources before European contact and colonization. You can see the tomol with three black figures depicts the end of the Brotherhood of the Tomol, when sailors crashed and because of missionization, were unable to make tomols. The tomol with three figures that in detail and color in the mosaic depicts the beginning of a new Brotherhood of the Tomol, when the Quabajai Chumash Indian Association built a tomol named Helek (Chumash, “Peregrine Falcon”) with the Santa Barbara Museum of Natural History in 1976. A crew took Helek circumnavigated the Channel Islands on a ten day journey. The fourth tomol depicts when the Chumash community made its first crossing from the mainland to Limuw on the tomol named 'Elye'wun (Chumash, “Swordfish”) on September 8, 2001. This marked the first time for the Chumash to make a return to an important place. Hundreds of Chumash now make a similar crossing every September, and when reaching the island Limuw, they are greeted with a massive bird, who is also depicted on the mosaic. Below her, are the footprints of myriad local animals, to remember the time when all animals once spoke the same language.

'Elyw'wun (swordfish) are powerful wizards who live at the bottom of the sea, which is why a swordfish is so prominent in the circle. In Chumash culture, the fish would chase whales beachward, making them easier to hunt. They are featured in the Swordfish Dance, with regalia comprised of a headdress with a swordfish skull and bill and cape with abalone shells. There is also ancient cave art in Point Conception called Swordfish Cave.

There are many more stories that are embedded within the Syuxtun Story Circle, and this tour site is only a sampling. The mosaic contains important stories from oral traditions about creation, cosmology, and the history of the Chumash who have lived and continue to live on this land.

Haley, Brian D.. "Point Conception and the Chumash Land of the Dead: Revisions from Harrington's Notes". Journal of California and Great Basin Anthropology, vol. 21, no. 21 (1999).