The Samuel Cupples House (often known simply as "Cupples House") is a 42-room, three-story mansion, originally commissioned and owned by St. Louis millionaire Samuel Cupples, and constructed between 1887 and 1890 by noted architect Thomas Annan in the form of a castle. It is situated on the site of St. Louis University and is now owned by the University. It is in the "Richardson Romanesque" style, which was derived from the type of architecture prevalent in France and Spain in the 11th and 12th Centuries. The house is currently operated as a museum and is open to the public. Much of the house consists of imported English oak woodwork (Cupples was a dealer in woodenware) and contains 22 fireplaces. The building also houses the Turshin Glass collection, which is one of the largest glass art collections in the Midwest, many Italian and Northern Renaissance paintings, and the McNamee Gallery. In 1976, it was entered in the National Register of Historic Places.

The exterior of the Cupples House 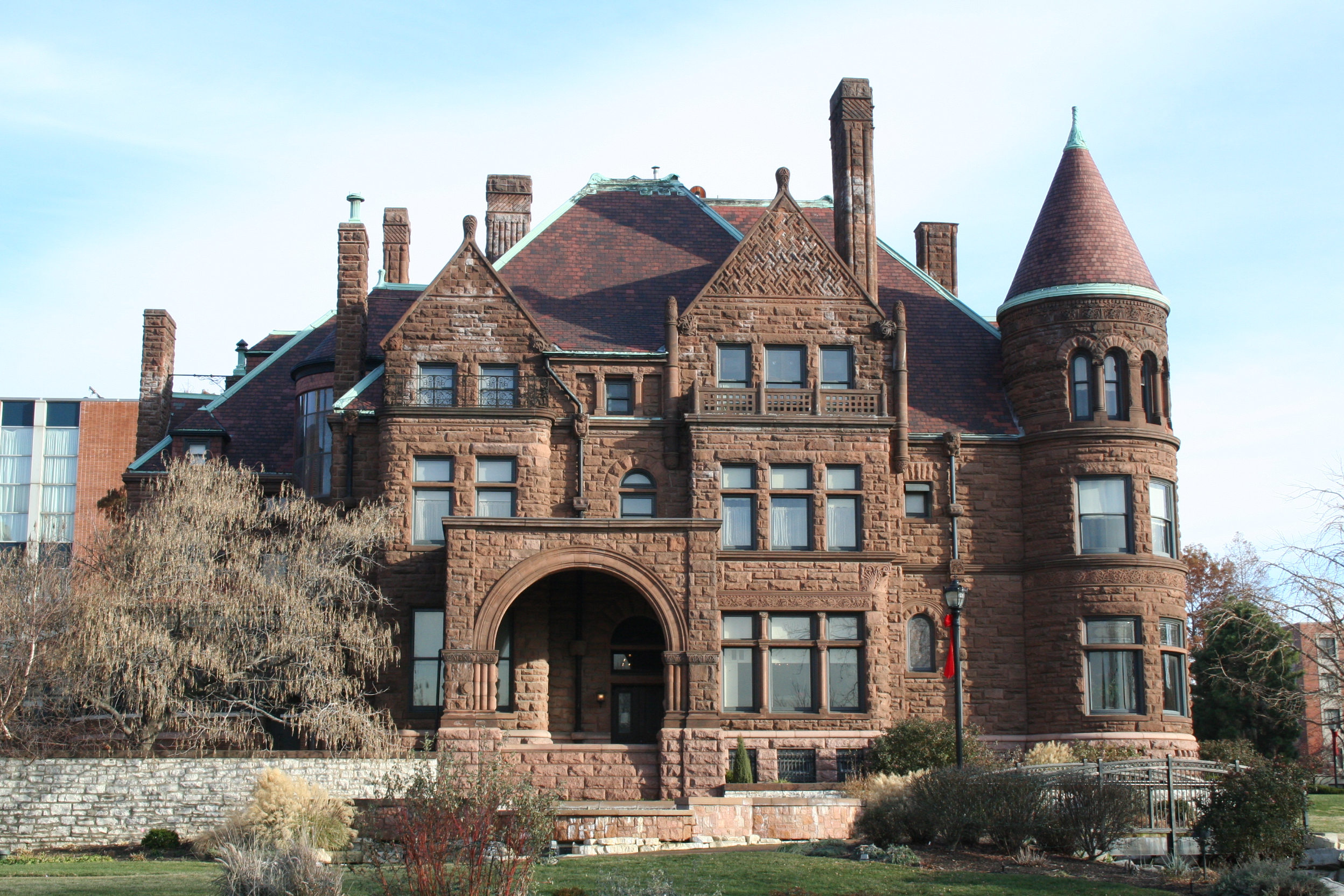 The present interior of the Cupples House, from the stairwell 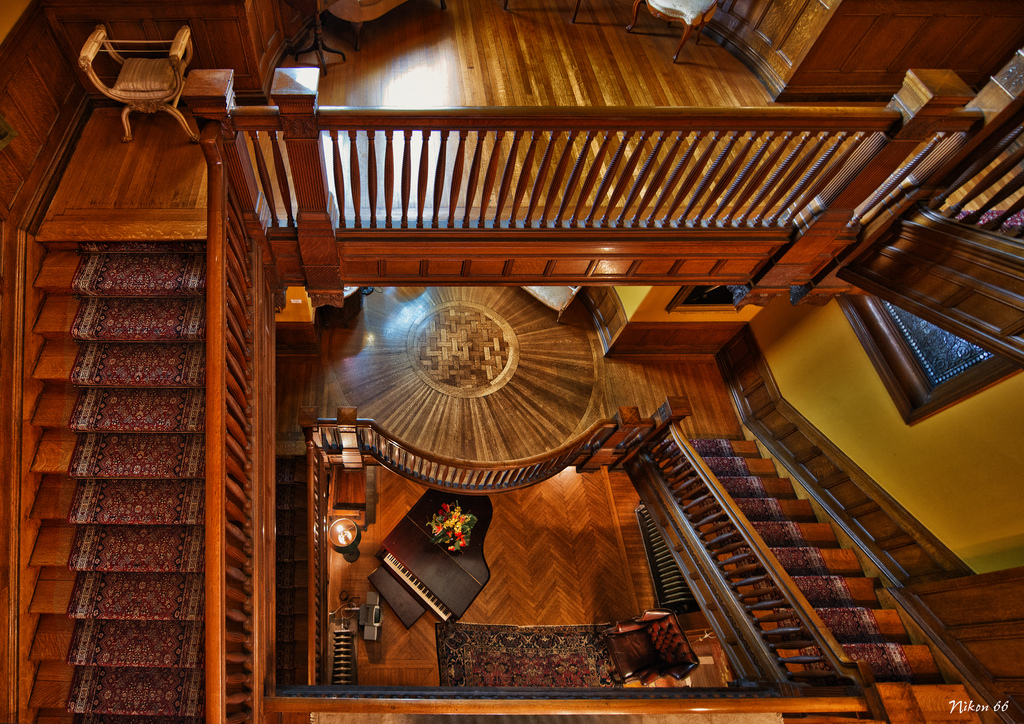 An interior room of the Cupples House 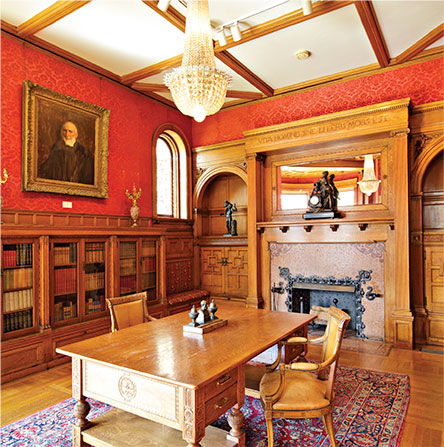 The music room of the Cupples House as it originally appeared 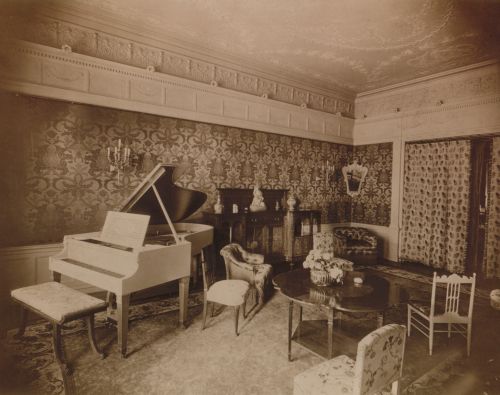 Born in 1831 in Harrisburg, Pennsylvania, of Irish immigrant parents, Samuel Cupples set out to make his fortune at the best possible time: the 1880s, the height of the so-called "Gilded Age" (a phrase coined by Mark Twain). His enterprise, Cupples Company, distributed wooden utensils, and he later branched out into the manufacture of them. He hired the talented brothers Harry and Robert Brookings and eventually made them full partners. (Robert later became the founder of the Brookings Institution.) Through this business and the warehouses he owned, Cupples became one of the wealthiest men in the Midwest.

When Samuel Cupples decided to build a house for himself, he chose to construct it in the Richardson Romanesque style, named after architect H.H. Richardson, who had popularized it. This was a common and highly-regarded style for public buildings (such as Boston's Trinity Church), but not for private individual dwellings, because of the enormous costs involved. But cost was not a problem for Cupples. The exterior of the building was carved by expert  masons, who fashioned gargoyles from the stone, and created rounded copper-covered towers.

The interior was carved by English craftsmen from Missouri pink granite and purple sandstone from Colorado. Tiffany-style windows let in the impressive light that pervaded the interior. The designs reflected the Arts and Crafts Movement originated by the Englishman William Morris, which was the style in which the English craftsmen had been trained. (Morris wanted to, in his words, "revive a sense of beauty in home life, to restore the dignity of art to the ordinary household decoration.") The stained glass throughout the interior was fully in harmony with the style. However, the house had no ballroom, as the devout Methodist Cupples did not approve of dancing. Altogether, the architecture of the structure rejected the Neo-Gothic design favored by the previous generation of Americans.

In his will, Cupples expressly stipulated that the house was not to be sold to St. Louis University (SLU). However, the family after Cupples' death sold it in 1919 to the American Railroad Telegraphers' Union, who used it for their offices (and demolished the stables Cupples had built). The union then sold it in 1946... to SLU. Until 1970, the University put it to use as a student union and for office space, but by 1973, it was slated for demolition.

The house was saved by a Catholic Jesuit priest and art historian, Fr. Robert McNamee, who renovated it and opened it in 1975 to the public for the first time. The following year, it was placed on the National Register of Historic Places. Fr. McNamee later became Executive Director of Cupples House. His legacy can be seen in the gallery that bears his name, which will exhibit work by SLU's students. The Cupples House also is home to the Eleanor Turshin Glass Collection, which includes many colorful pieces of Art Nouveau and Art Deco glassware. The house also displays art from SLU's permanent art collection, as well as donated period furniture.

As for Cupples himself, even in old age his life was eventful. He became involved in numerous philanthropic enterprises. In January 1909, the Royal Mail Ship Republic, on which he and his family were sailing, set out from New York bound for the Mediterranean when it was rammed by the S.S. Florida. (The Republic was a White Star Line ship, like the later Titanic.) However, only six people died. The subsequent rescue, aided by the wireless telegraph, is still regarded as the largest open-sea rescue ever. The passengers saved included Samuel Cupples, but the experience exacerbated his illnesses, and he died in 1912, at the age of 80.

11:00 am - 4:00 Tuesday through Saturday Docent-led tours Monday by appointment only Closed during the month of January and on national and Catholic holidays