Arna Wendall Bontemps was born in 1902 in Alexandria, Louisiana. He was a graduate of of Pacific Union College in California, where he had moved during childhood. Bontemps also taught at Harlem Academy in New York. He would become a pivotal figure and poet during the African American literary movement, the Harlem Renaissance. He was a widely celebrated writer, publishing 25 books, which included novels, children’s books, biographies, histories, poetry and play collections. 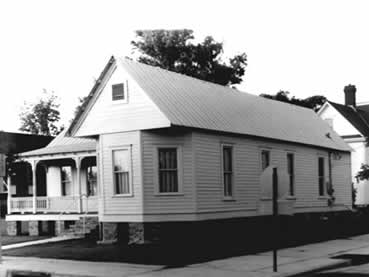 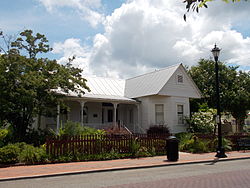 The National Historical marker outside the Bontemps home. 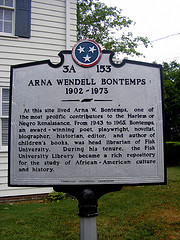 A photograph of Arna Wendall Bontemps. 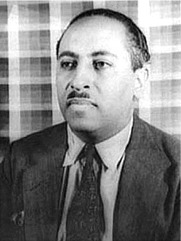 Arna Wendall Bontemps was born October 13 of 1902. His family hailed from the Deep South, specifically Alexandria, Louisiana, which contributed to their Creole heritage. His father, Paul, was a bricklayer and his mother, Carolina, a schoolteacher. His father would play an integral role in shaping Bontemps life and choices. Paul Bontemps encouraged the family to move to Los Angeles when just three. Arna was reared in California and attended San Fernando Academy for his adolescence. It was during this stage of maturation that Bontemps was advised by his father “not to go up there acting colored.” “there” meaning school. This is an urging Bontemps will later allude to in many of his works as an attempt to make his disregard his heritage.

Bontemps attended Pacific Union College and graduated in 1923. Just the next year he accepted an offer to teach in Harlem, New York. Bontemps articulated that his original plan was to continue his own schooling until obtaining a Ph.D. in literature; however, this failed to happen. He married Alberta Johnson, a former student, in 1926. The pair had 6 children, while Bontemps took continuous teaching jobs to support. His time teaching in Harlem seemed to work as an inspiration though, and during the years of and following his marriage he won 3 first place prizes in contests for “New Negro”1 poets. That was not the only advantage on teaching in New York at this time. Bontemps would meet and collaborate with a number of other widely talented African American writers during the mid- 20th century including, most notably, W.E.B Dubois, Langston Hughes, and Zora Neale Hurston.

Bontemps first published poems were seen in Crisis and Opportunity, two magazines that promoted the writings of young Blacks. His first full-length book, a work of fiction detailing the exciting life of a Black horse jockey who went by Little Augie, was released in 1931. Reviews were mixed, most negative critique came from those complaining that the book focused to heavily on the more promiscuous side of life in the African American community. The same year Bontemps took a teaching position at Oakwood Junior College in Huntsville, Alabama. He would be let go just two years later due to tensions that arose from the clashing his own liberal political views and book topics, which opposed the conservative outlook of the College. During this time Bontemps penned a children’s book with the help his friend Langston Hughes, called Popo and Fifina: Children of Haiti.

After leaving Alabama Bontemps pursued farther education, getting his master’s from the University of Chicago in library science. He was then appointed to be librarian at Fisk University, an elite Black college. This role was followed by many honorary teaching positions and degrees from institutions of higher education including the University of Illinois and Yale. Bontemps returned to be a write in residence at Fisk after serving in these various professorships.

Starting at a pair of historic churches and Hotel Bentley, this walk through Alexandria includes a handful of historic buildings and other landmarks. Highlights of the tour include the Louisiana History Museum, Arna Bontmps African American Museum and Cultural Arts Center, and the Alexandria Museum of Art.

This short walk through the heart of Alexandria LA and includes several downtown landmarks and museums. The tour starts at St. Francis Xavier Cathedral and then moves on to Emmanuel Baptist Church, Hotel Bentley, the Alexandria Museum of Art, Arna Bontemps African American Museum and the local Louisiana History museum.