This local museum specializes in the early history of Coffeyville, including the famous final stand of the infamous Dalton gang. Despite the museum's use of savvy marketing to attract visitors to the city, exhibits go far deeper than the history of outlaws and lawmen. The museum is operated by the Coffeyville Historical Society and includes many exhibits related to the history of early settlers, businesses, the railroad, and prominent families that were all key to establishing one of the leading cities in southwestern Kansas. Of course, visitors looking for information about the Dalton gang and the men who confronted them will not be disappointed. The museum volunteers are always happy to offer bits of local information and directions to Elmwood Cemetery where the Dalton gang and two of the city's defenders are buried.

Operated by the Coffeyville Historical Society, this museum offers more than just a history of the final days of the Dalton gang. 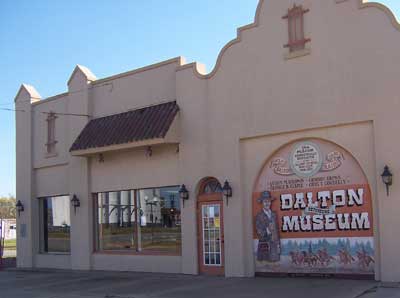 The Dalton's Defenders Museum opened on the Fifth of October 1963 to honor the town's defenders who stood up to the infamous Dalton Gang while also serving as a boon to local tourism. The museum tells the story of Coffeyville in the 1890s. Despite the image of the "wild west," towns like Coffeyville were quiet. In addition, attitudes towards guns were different and it was not surprising that few local men owned weapons or had experience in gun battles. In fact, local law enforcement would often be unarmed or only carry a single pistol. The Dalton planned a quick raid but failed to recognize that the racks for hitching horses had been removed while the city was working to pave some of the streets. The Dalton Gang decided to tether their horses to a fence in a narrow passage known today as Death Alley.

On October 5, 1892, five members of the Dalton Gang attempted to rob two Coffeyville banks. The gang was comprised of Grat, Bob and Emmet Dalton; Bill Power and Dick Broadwell. As the gang began to move towards the First National Bank and the Condon Bank across the plaza, the Daltons were spotted and identified by some of the local townspeople who spread the word of their presence.

As more and more people heard of their arrival and likely bad intentions, some of the men acquired arms from the local hardware store and stood ready to confront the gang when they attempted to leave the two banks. Isham's Hardware store was right next to the First National, which looked out on the Condon and the plaza and down Death Alley to where the gang had left their horses. The owner of Isham’s and a second store were willing to loan firearms to anyone who wanted to stop the robbers. The first shots were fired at Emmett and Bob, who dove back into the First National and then out the back door, killing a young store clerk in the process. Grat led Power and Broadwell into the Condon

During the gun battle, a total of twenty-eight people were harmed. Eight men who were not identified were killed along with four men who have been identified as Coffeyville's defenders: Marshall C.T. Connelly, Lucius Baldwin, George Cubine, and Charles Brown. Of the gang, Grat and Bob Dalton along with Bill Power and Dick Broadwell were also killed. Emmett Dalton was severely wounded in the battle, receiving twenty-three gunshots. After the smoke had settled, he was later caught and imprisoned where he served fourteen years. Three other citizens were also harmed in the crossfire.