To end the conflicts between Mexico and the United States, a treaty was signed that made the Rio Grande the boundary between the two nations. Over time the river has moved by both natural causes and human intervention, bringing several areas into dispute. Cordova Island is one of the most prominent areas disputed, and became affiliated with crime as a result of inability of either nation to enforce laws without first coming to an agreement.

Map demonstration of the area during the conflict. 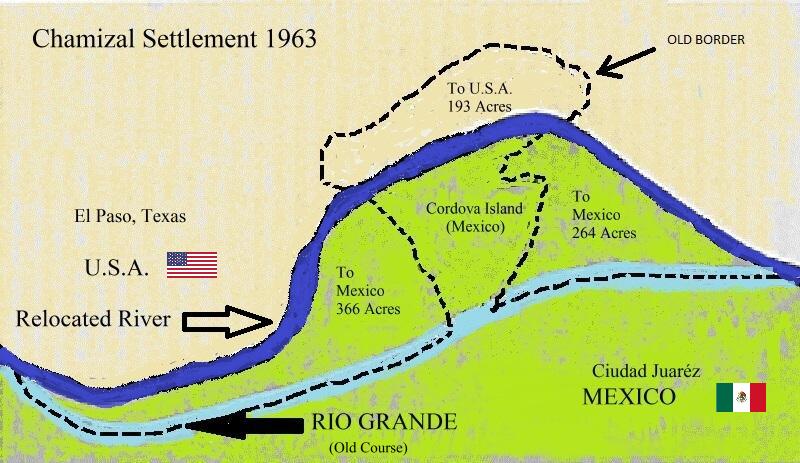 Following the end of the Mexican-American War, an agreement was signed between Mexico and the United States of America to set a standing boarder between the two nations and prevent future disputes. The agreement agreed that the Rio Grande river would be the boarder. Over the decades the Rio Grande river has slowly shifted further south, in effecting moving the border and giving additional land to the United States. In addition man made efforts to alter the river were done also causing issues, as man made alterations according to international law did not lead to a change in the land holdings. As a result of the moving river, several areas of land became disputed between the United States and Mexico.

One such area was an island that was created between two forks in the river, caused by the change in the river. Since the river was created from possible interference with the river's natural course, it was disputed who should have control of it. For several decades, diplomatic meetings were held between the two countries, one including former President Taft, and several between other noted diplomats. Despite these efforts, a solution was not agreed to by either side.

As a result of both nations attempting to enforce laws in the area, it became home to organized crime. Neither nation was able to successfully enforce laws as it was not clear who owned the territory. Eventually in 1963 the two nations would agree to the Boundary Treaty, with both giving up some land, and having collaborative efforts in flood control to maintain the Rio Grande river at its present location. An international organization now organizes all efforts in the maintaining the Rio Grande. The land areas have been locked into their respective nations and no longer change with the moving of the river. In the land successions given 366 acres were given to Mexico, and 193 acres were given to the United States, divided by the northern flow of the Rio Grande river.