Built by Allen and Barbara Mayhew in 1855, this cabin is most famous for a few of its overnight guests that were connected to the Underground Railroad. These guests include George B. Gill and John Henry Kagi, Barbara Mayhew’s younger brother. Kagi was killed during John Brown's raid on Harper's Ferry and Gill was an associate of John Brown who helped slaves escape to the north prior to the Civil War.

The cabin was moved in 1937 from its original location.Run as a tourist attraction with some dubious claims, the site is now operated by a non-profit foundation. 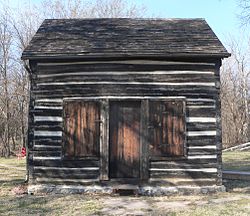 From 1938 to 2002 the site included a tourist attraction called "John Brown's Cave." To read about the history of this site, read James Potter's article linked below. 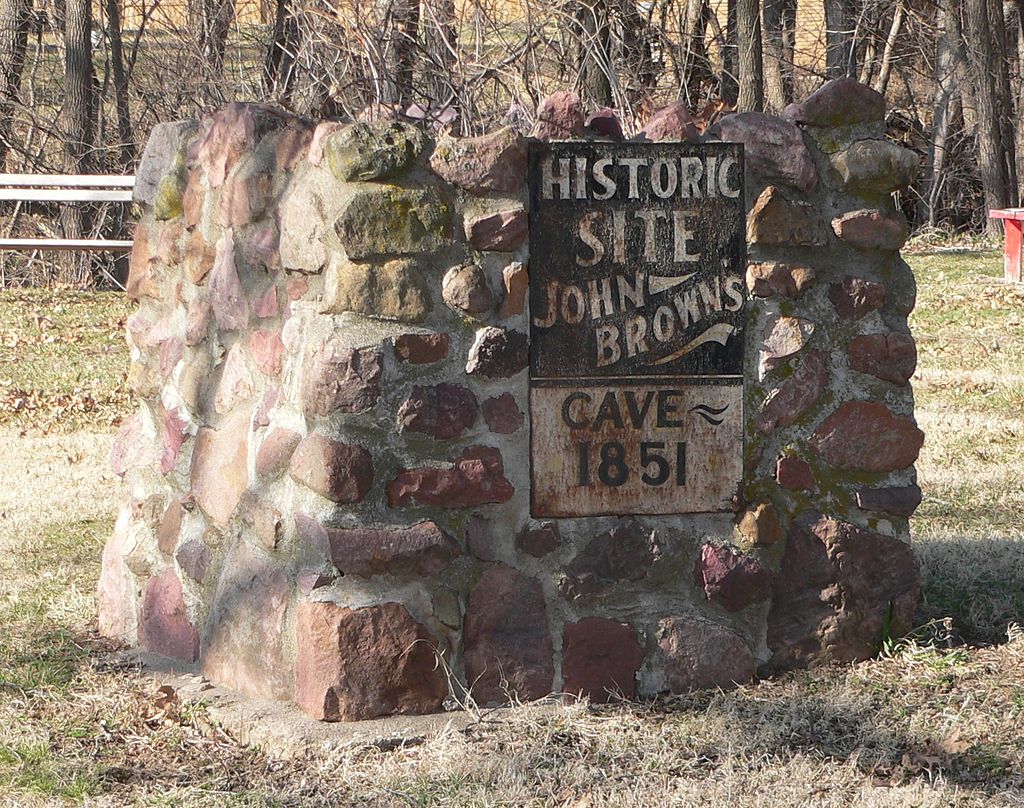 Allen B. Mayhew and his wife Barbara left their homes in Ohio to settle a homestead in Nebraska Territory in 1854. They established their claim and built their cabin throughout their first year in the Territory, using square hand-hewn logs from native cottonwood trees. Their involvement with the Underground Railroad began when John Henry Kagi, Barbara Mayhew’s younger brother, was forced to leave Virginia because of his abolitionist views. Kagi came to Nebraska and lived with the Mayhews in 1855. He later moved to Kansas Territory and took up the antislavery cause, eventually meeting abolitionist John Brown. During the tense and violent period known as "Bleeding Kansas" Kagi often stayed at the Mayhew cabin.

Edward Mayhew, the eldest son of Allen and Barbara Mayhew, recalled in an 1890 letter to a newspaper that his uncle, John Henry Kagi, brought fourteen African Americans to the house where they were fed breakfast and only escaped capture because the pursuing men from Missouri realized Kagi was armed.

A second book published in 1894 contain the recollections of abolitionist and Underground Railroad conductor George B. Gill. Gill also recalled staying with the Mayhews in 1859 while he traveled with Kagi and John Brown to Iowa. Gill fell behind and because of the cold sought out the Mayhew cabin before catching up with John Brown and his party. When he left, he escaped capture by a marshal’s posse by fifteen minutes.

After John Henry Kagi died in John Brown’s Raid on Harper’s Ferry in October 1859, there is no further evidence that the Mayhews sheltered abolitionists or supported members of the Underground Railroad. Allen and Barbara Mayhew remained in Nebraska City and had six more children. Allen Mayhew farmed, made wine, and sold homemade brooms. He died in 1862 during an attempt to discover gold in the Snake River Valley. After her husband's death, Barbara moved and sold the cabin. She married again and died in 1882.

The Mayhew Cabin has remained open to the public since 1938. It became a popular tourist attraction that enthralled thousands of visitors each year-largely due to a series of tunnels that were built in 1938 and billed as "John Brown's Cave." The "cave" led to the creation of the myth that the cabin was an active station on the Underground Railroad. Despite the folklore, the cabin is one of only a few extant sites in the US that has a documented association with militant abolitionists such as Kagi and Brown.

May through October, Thursday through Sunday, 9 am -5 pm, and by special appointment