Museo Mayachen is creating a space for the learning of history and culture that engages the community it serves. The museum is a space that embraces the public and encourages them to become active participants in the retelling of their story. It is a gallery for permanent exhibits that features the heritage of the south central Neighborhood in El Paso, Texas, retelling the history of struggle of the Mexican immigrant women garment workers and farm workers in the area, as well as the Chicano Movement. More than one century of the struggle of working class people in our community has remained untold. Museo Mayachen proposes an equitable retelling of the past through the lens of the worker. As it offers both Mexican and Mexican-American history on both sides of the border as a living, breathing phenomenon, the entire museum dynamic changes.

Interior of the Museo Mayachen 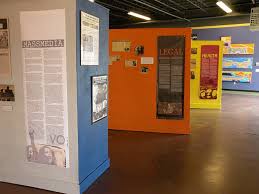 Bracero Proyect; The Mexican migrant worker has been the foundation for the development of the rich American agricultural industry, and the El Paso-Ciudad Juárez border region has played a key role in this historic movement. One of the most significant contributions to the growth of the agricultural economy was the creation of the Bracero Program in which more than 4 million Mexican farm laborers came to work the fields of this nation. The braceros converted the agricultural fields of America into the most productive in the planet. This exhibits the bracero proyect as well as most of all the history involving being a bracero, leaving the country and becoming part as an immigrant. Despite their enormous contribution to the American economy, the braceros suffered harassment and oppression from extremist groups and racist authorities along the way.

Chicano Power The Chicana Chicano History Archive has brought together key figures in this movement's history. Members of MAYA, Chicanos Unidos, and MEChA have pledged their support and materials to make this archive a resource for generations to come. Having access to these individual organizations provides a window in time to a period in history that has dramatically changed the Mexican and Chicano experience forever. Local newspaper articles, organizational materials, photographs and other items give new life to this history, giving today's struggles a legacy to build on and an anchor that offers a sober reflection of where the nation’s policies still need to grow.

The Chicano movement was a cultural as well as a political movement, helping to construct new, transnational cultural identities and fueling a renaissance in politically charged visual, literary, and performance art.

The movement’s objectives dealt with not only social justice and equality, but also consisted of educating the Mexican American population about the rich cultural inheritance. The Movement held a variety of dimensions in different points of the country. El Paso, Texas was witness to important mobilizations and actions in this period of history that dramatically changed the Mexican American experience forever.

The Museo Mayachen brings together key figures in the movement in El Paso, in order to record and archive the testimonies of leaders and characters that play a role at this time in history. The Chicano Exhibit Committee has been meeting for the last two years and has been working on an exhibit titled: “Chicano Power! The Legacy of the Chicano Movement in El Paso.” which will open at the Museo Mayachen on February 6th.

Look at the local history of the Chicano Movement in our community and its aftermath. Stepping stones to our struggles today.