Wright's Tavern was built in 1747 by Ephraim Jones. Jones operated the tavern until 1751 and twenty three years later, it was the site of the first meeting of the Massachusetts Provincial Congress. In April 1775, the tavern was the assembly point for Concord's Minutemen before the Battles of Lexington and Concord. The building has been well-preserved since the colonial period and is historically significant given the building's association with the Battle of Lexington and Concord at the start of the American Revolution.

Wright's Tavern, built in 1747 at Concord, played a colorful role in events leading up to the War for Independence, and in the fighting which marked the war's first day (National Park Service) 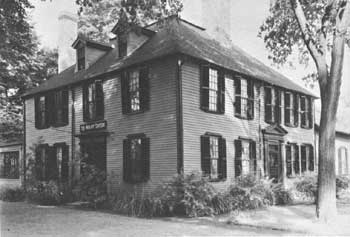 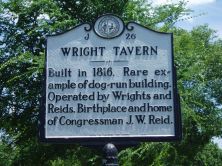 Information plaque from the front of the Tavern 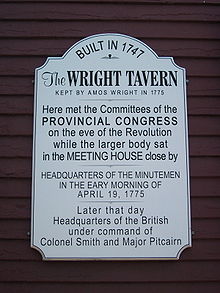 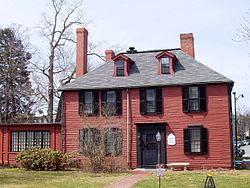 Wright's Tavern began as a hostelry and a private home. When Ephraim Jones died in 1766, it was sold to Daniel Taylor who owned the Tavern until 1775 when it was sold to Charles Swan from Charlestown. Wright's Tavern is named after Amos Wright, although he never actually owned the building. Wright likely rented the building and was later linked to it by one of his descendants in the early 20th century. According to the Historic Structure Report, “Lemuel Shattucks referred to the building as “Wright’s Tavern, now Deacon Jarvis’s” in his 1835 History of the Town of Concord, giving more credence to its local association with Amos Wright.” Wright’s Tavern was managed by Amos Wright at the dawn of the American Revolution. Wright was the Tavern keeper on April 19th, 1775 when local militia gathered here prior to the skirmish at Concord's North Bridge. Allegedly, two of the British soldiers stopped into the Tavern for refreshments. The Massachusetts Provincial Congress met prior to this time in October 1774, at the First Parish Church. Wright's Tavern also served as a meeting place for committees of the Congress during the 5-day session.

From approximately 1747 to 1787, this building functioned as a home and tavern usually operated by renters. The Tavern became a bakery in 1793 when it was purchased by Deacon Francis Jarvis and baker Thomas Safford. There is some evidence that suggests Jarvis rented the building before the two purchased it. In John Cole's 1989 study of the building, Cole found Jarvis' name written on a beam in the building alongside a year: 1787. It is likely that both Jarvis and Safford lived in the building with their families while operating their bakery. In 1795, Jarvis bought out Safford. Jarvis remained at Wright's Tavern until 1831 when he moved to Buttrick Farm. He continued owning the building during this period, renting it out to various tenants. In 1839, Stephen Jarvis purchased the Tavern from Francis Jarvis for $1. Stephen was born in Massachusetts in 1795 and may have been Francis' son. At the time Stephen purchased the building, he was a merchant living in New Orleans. He remained in New Orleans and rented the building out to others. In 1853, James M. Billings purchased the building from Jarvis and lived there with his wife and children. He was listed as a stable keeper on the census, suggesting he made his income from the barns near the building rather than from the building itself. Five years later, the mortgage was assigned to Samuel Staples who acquired the property with George Prescott. After their ownership, the building changed hands every few years and functioned in different capacities for various types of businesses.

The First Parish Church in Concord acquired the building in the 1880s and began renting it out to tenants once again. By the mid-1890s, the Tavern was a restaurant and lodging. The Tavern continued to function in this capacity until the 1950s. During this roughly 50 year period, the building was occupied by various renters. By 1958, the building had been vacant for a year which ended its use as a restaurant and lodging. Throughout the 1960's and 70's, the building housed retail businesses and offices. The Secretary of the Interior declared the Tavern an historic site in 1961 and stated that it was eligible for the National Register of Historic Places. During the Bicentennial of the American Revolution in 1975, the Tavern's condition was reassessed. The Concord Bicentennial Committee and the First Parish Church created a plan for its continued upkeep, rather than dealing with structural issues as they arose. Over the centuries, several changes had been made to the Tavern both aesthetically and practically. Today, the building has been incorporated into the Concord Museum as an educational space.