This is a contributing entry for Monroe County Historical Society Museum and only appears as part of that tour.Learn More.

From the end of the eighteenth century to the early days of the twentieth, Monroe County's medicinal springs enjoyed an enormous popularity. Invalids and pleasure-seekers from all parts of the nation came to the resorts built around the many springs in search of health and diversion. Visitors left innumerable testimonials to the efficacy of the foul-smelling water of the springs. As the resorts improved, the medicinal aspects of the springs played a less prominent role. The springs became the place to see and be seen. Families often went from resort to resort in a social round. The twentieth century saw a decline in the popularity of the springs. Medical advances, improved transportation, and the demand for more sophisticated forms of recreation all played a part in the decline of the springs. Today, only the Greenbrier and the Omni Hot Springs continue.

There were many springs resorts and spas in Monroe County. This article will focus on the three largest, the Red Sulphur, the Salt Sulphur, and the Sweet. 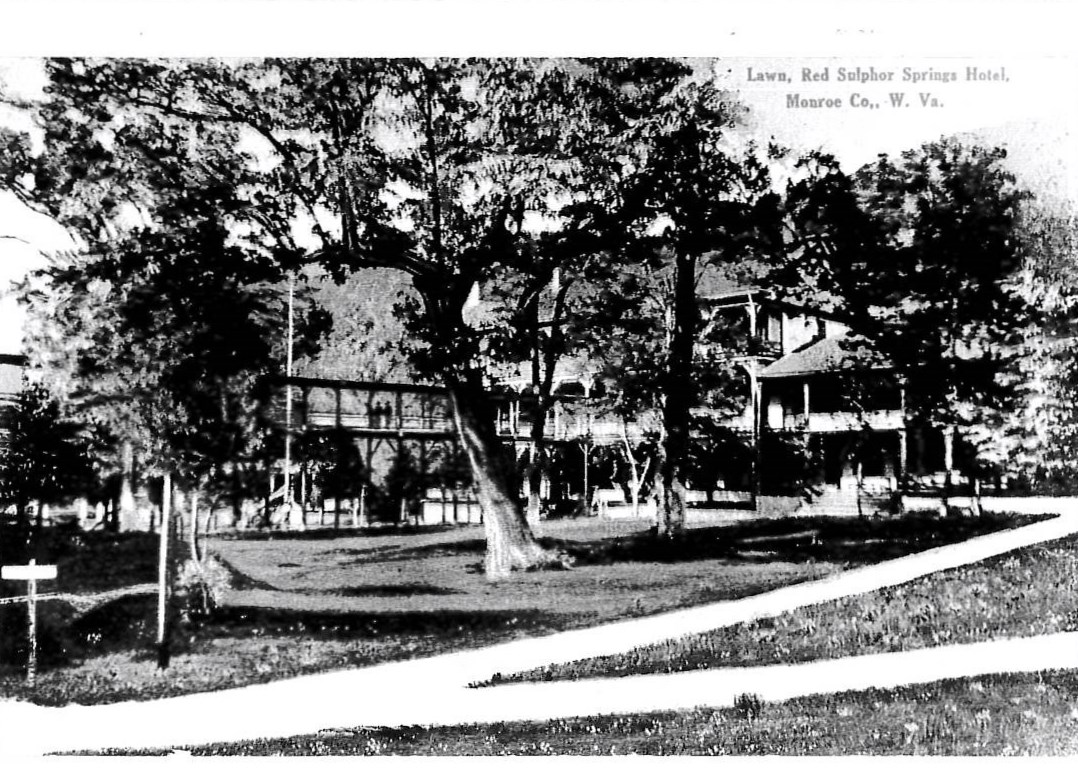 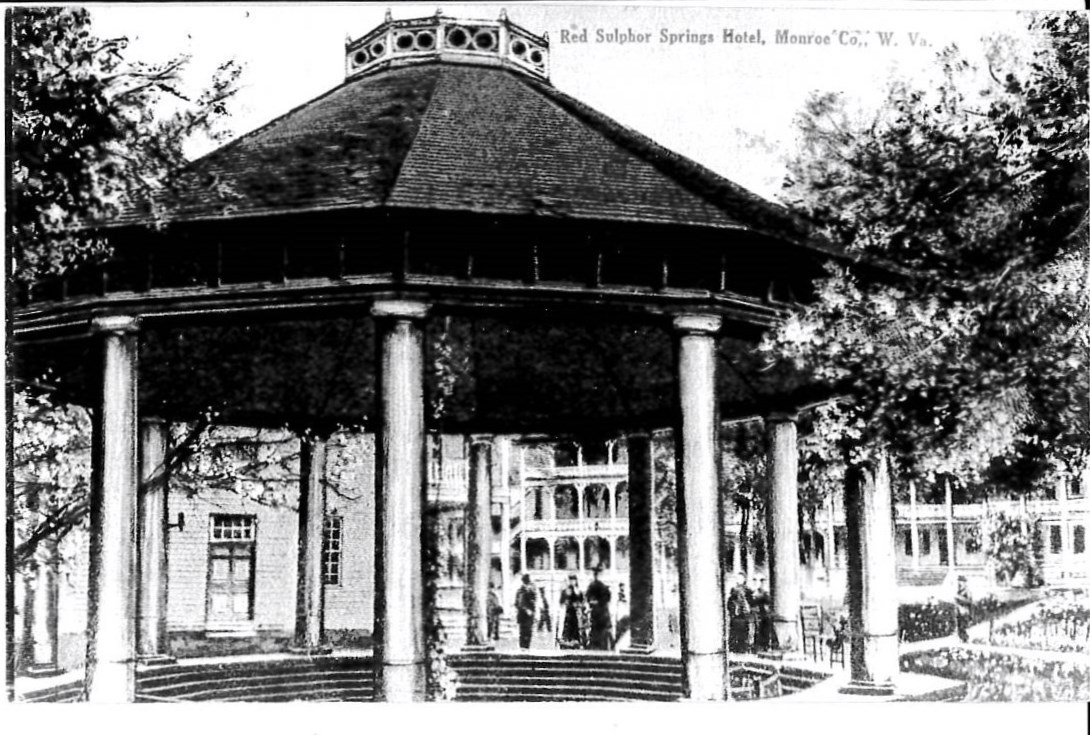 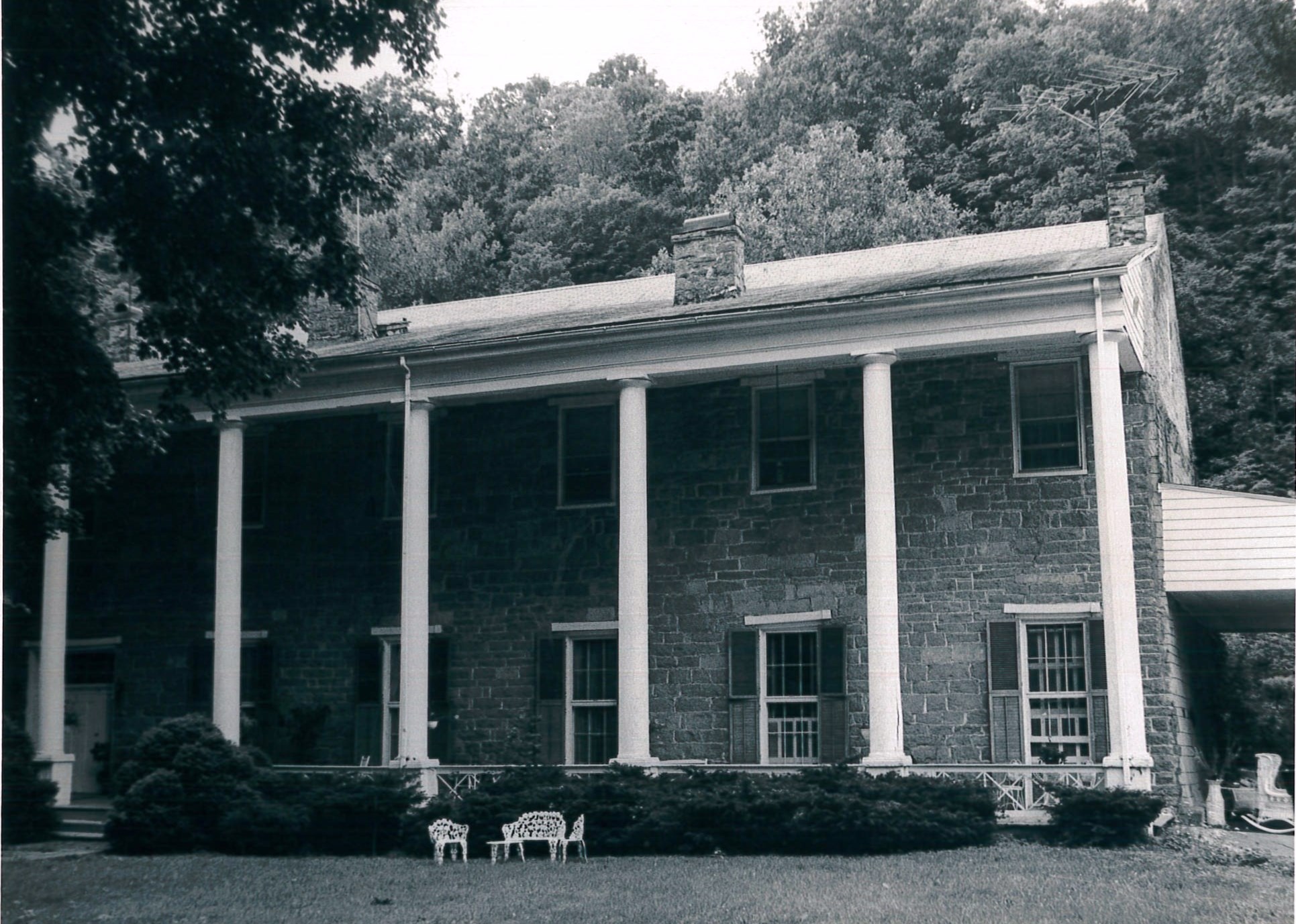 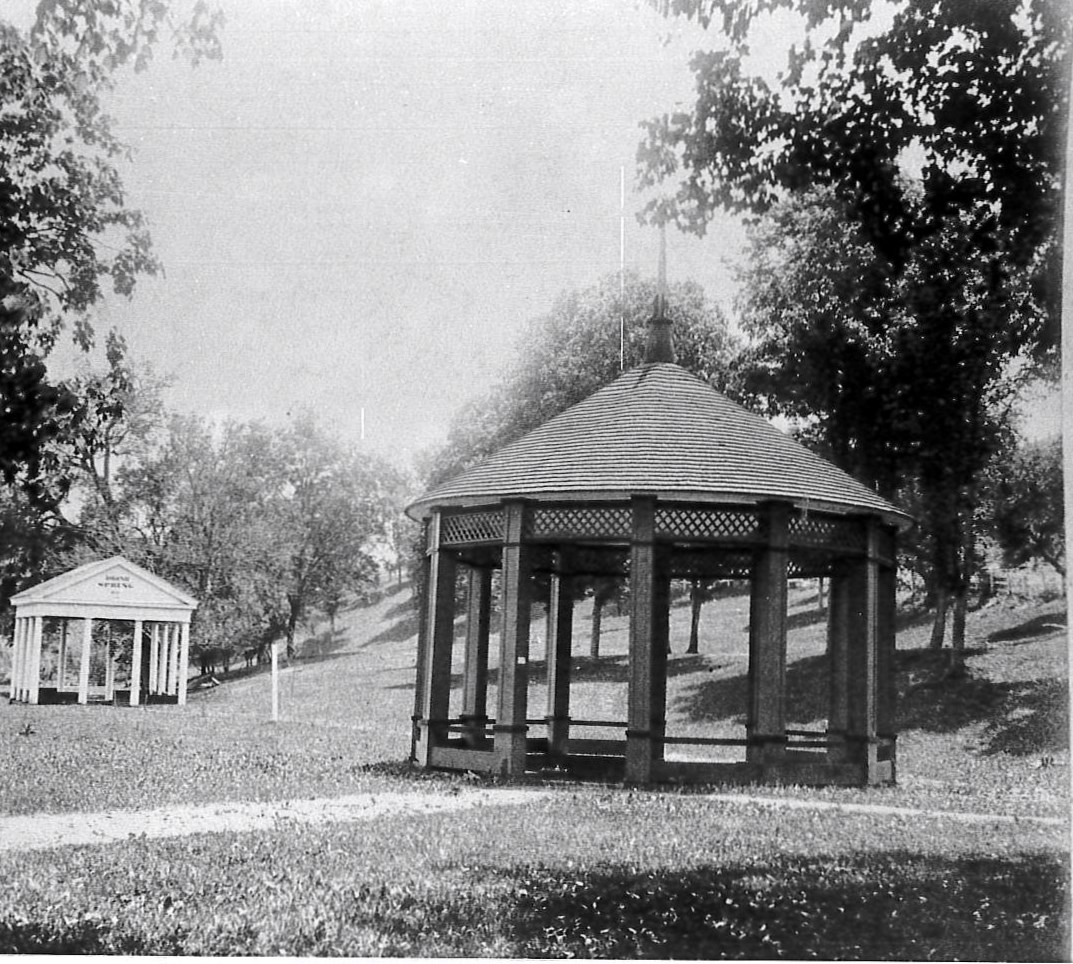 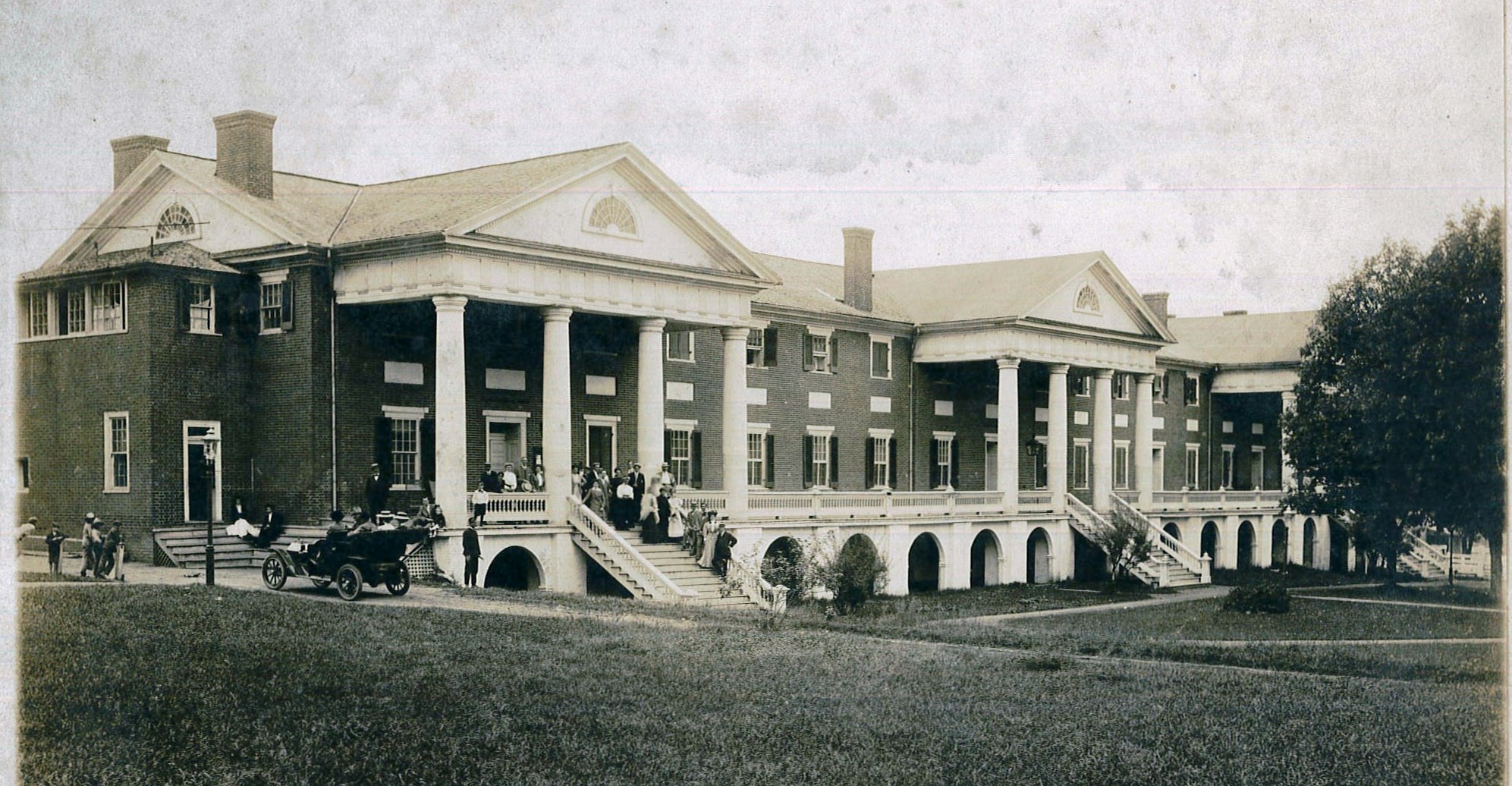 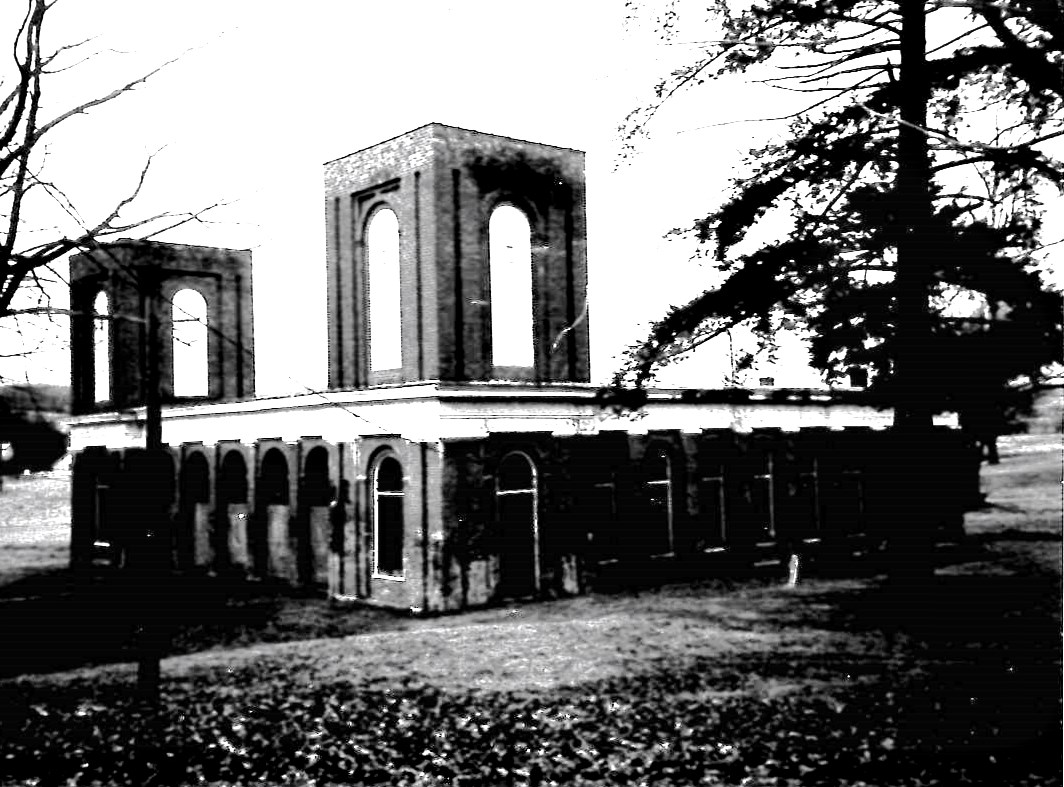 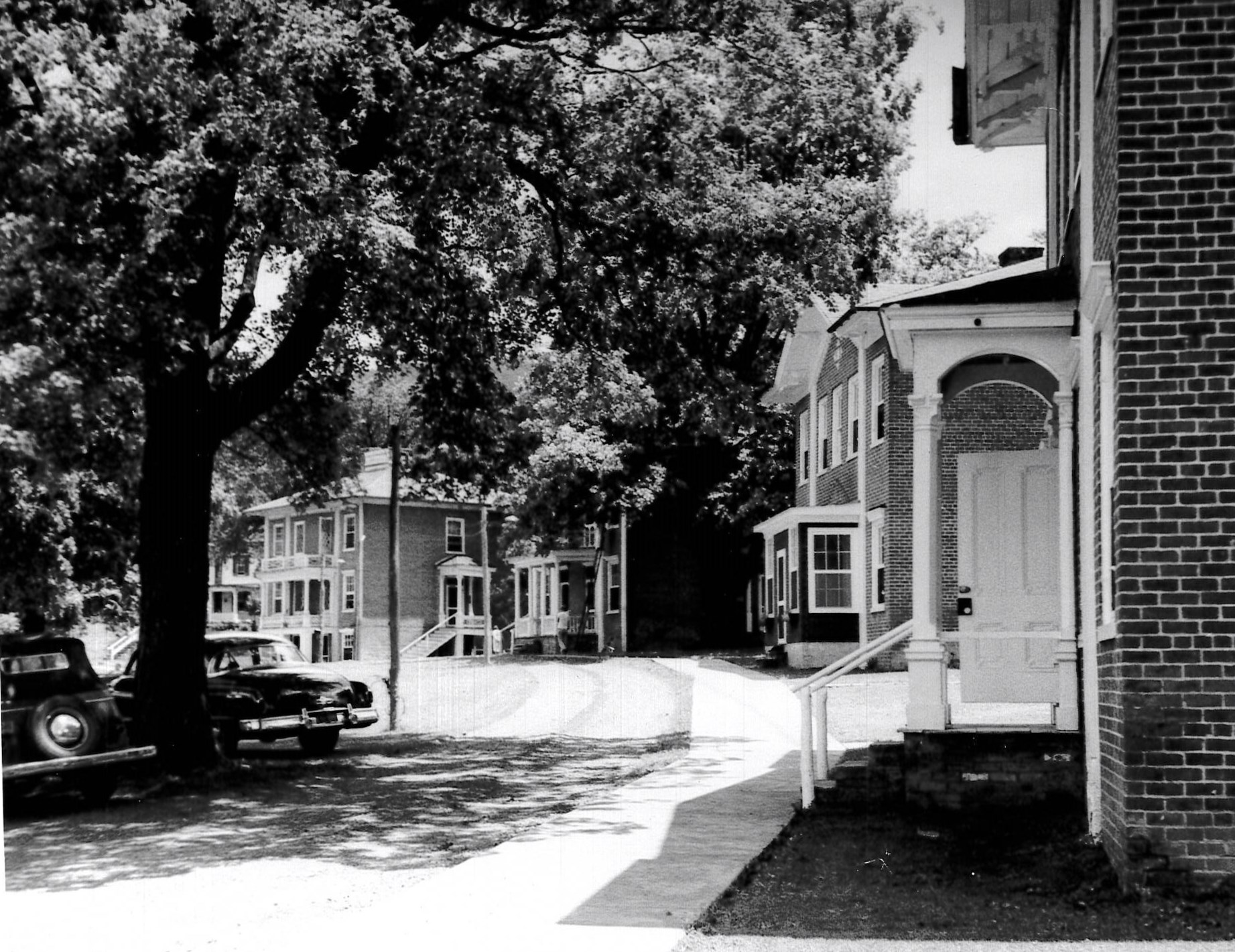 RED SULPHUR: The spring at Red Sulphur was used as a watering place since about 1800, as a primitive spa with log huts was developed by the Harvey family. The sulphur water was used to ease sore legs and skin diseases. A pavilion over the springs was built about 1830. In 1833 Dr. Burke bought the valley and the springs, razed the log huts and built a resort to accommodate 350 people. The hotel had buildings along Alabama Row, Philadelphia Row, and Bachelor's Row.

1892 was its banner season, with over 800 guests. The resort had niceties not found elsewhere, with covered walkways between buildings, a ventilated ballroom, ice cream daily, a wood fireplace in every room, and a carpeted drawing room.

The resort was acclaimed for the treatment of tuberculosis. The band was known to retire early so the “invalids” could rest, giving the resort the nickname of “Sleepy Hollow”. The springs got their name from a purplish-red deposit that forms from the water.

The property was sold before the Civil War to the Campbell brothers. It served as a hospital during the war. In 1896 former Vice-President Levi Morton purchased the property and invested in many upgrades. After passing through an assortment of owners, the resort was torn down around 1927. The last of the buildings, the store building, burned between 1930 and 1935. The remains of the resort can be found on Rt. 12 in a valley known as Campbell's Cove. The resort is a cow pasture now, with a recessed small circular enclosure for the spring.

Salt Sulphur Springs was opened as a resort in 1821, with cabins built of logs. Bath houses were built in 1820. In 1823, the resort was opened to the public. Erskine and Caruthers bought the property and managed the resort and store. The resort was used as a hospital during the Civil War. After various owners, in 1882 General Appleton, who a recruiter for 54th Massachusetts Infantry Regiment, the second African-American regiment in the Civil War, became manager. He was unpopular with the southern customer base, and visitors from the North were few in numbers.

The springs were used to treat goiter, diseases of the skin and in “cases that require active cathartic operation” (Moorman). The bubble of gas from the water may be “eagerly caught up by some care-worn and almost world-weary invalid as a gem from the treasury of Hygeia” (Moorman)

The resort had a theater, bowling alley, two mills and a butlery. The ballroom is in the main building, pictured above. The ballroom is 45 feet long and 30 feet wide, with ceilings of 15 feet. The balcony used by musicians is 15 feet long and 4 feet wide. The heyday of the resort was between the years of 1837 and 1861. At one time over 2,000 people were listed as guests, including John C. Calhoun, Henry Clay, and Martin Van Buren. The Salt was reported to have the best table in the mountains.

The resort closed around 1913. Much of the land was sold to surrounding farmers. After a brief attempted revival of the resort in 1921, the remainder of the resort was sold for private use. The main building and the cottages still stand, and are a private residence.

SWEET SPRINGS: The Sweet Spring was discovered in 1760, and became a watering place for travelers. In 1781 log huts were available for guests. The first hotel was built in 1792, hosting upward of 200 people and their servants. In 1830, the original buildings at the spring were taken down and work commenced on the large brick hotel, designed in a classical style by a protege of Thomas Jefferson. Most of the buildings were completed by 1833. The bathhouse was completed in 1850. The 1859 season saw 2,752 guests.

The water of the springs was described as chalybeate, (iron salts) and touted as a cure for various diseases. The resort also became a rendezvous site for society. This resort was one of the first of the western group to put the importance of society over invalidism; offering gambling, billiards, faro, whist, loo and dueling. The ballroom was described as 60 by 120 feet.

The resort did not appear to operate during Civil War, but enjoyed relative prosperity throughout the late-nineteenth century. In the 1870's the C & O railroad eased transportation difficulties, with an omnibus from Allegheny Station and the hotel registered up to 800 guests. The resort declined sharply after 1920, and a series of owners attempted to revive the hotel for a decade before it closed in around 1928. A significant factor that led to the gradual decline of Sweet Springs was lack of any railroad line near the resort. Nearby resorts such as White Sulphur Springs (better known as The Greenbrier) and Hot Springs thrived in this period with ready access to railroads.

After Sweet Springs ceased to operate as a resort, the buildings were purchased by the state of West Virginia in 1941 for a tuberculosis sanitarium, closed in 1943 and then rehabilitated for the Andrew S. Rowan Memorial Home for the aged in 1945. The Rowan Home closed in 1991. Sweet Springs was once the grandest spa in Western Virginia, aside from the Greenbrier. The remaining buildings reflect the past age of opulence and gracious living.