The Kansas Cosmosphere-one of the "8 Wonders of Kansas." 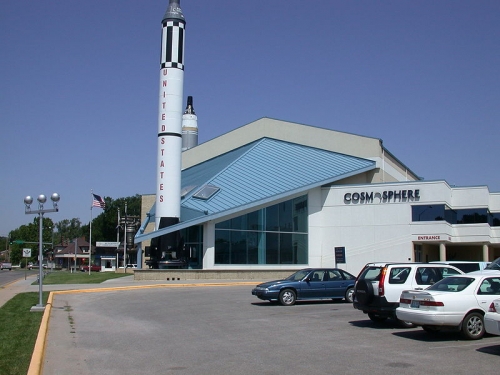 At the Cosmosphere, visitors hear the non-biased, definitive story of the Space Race. The Kansas Cosmosphere and Space Center, conceived by long-time Hutchinson resident Patricia Carey, is one of America's premier space centers. Making its start as a small planetarium on the Kansas State Fairgrounds, the Cosmosphere is now an internationally-acclaimed staple of the space science community.

The Cosmosphere was also the first institution to become an affiliate of the Smithsonian Institution, and is still the only Smithsonian affiliated museum in the state of Kansas. In 2008 it was voted one of the eight wonders of Kansas by a national poll.

Highlights of the Cosmosphere include:

The V-1 “Buzz Bomb” was filled with enough gas to get to its target, then would drop from the sky and explode upon landing.

The V-2 was the world’s first ballistic missile.

Sputnik 1 was the back up for the actual Sputnik 1 that launched the world's first satellite into space.

Sputnik 2 was used in testing before Sputnik 2 launched the world's first living being into space: a dog named Laika.

Redstone Nuclear Warhead rockets were, at the time, the most accurate missiles yet built. This model is not bearing any radioactivity or even the lead shielding.

109-foot Titan rocket was used to launch astronauts into space during the Gemini program.

Gemini X spacecraft was flown by a two-person crew during the Gemini program.

Apollo White Room - one of only two white rooms used during the Apollo program.

Apollo 13 command module Odysseyhoused the Apollo 13 crew through take off and reentry into Earth's atmosphere. "Houston, we've had a problem."