Hanging Rock State Park is part of the most easterly mountain ranges in North Carolina, the Sauratown Mountains. The park was dedicated in 1936 on land given to the state by nearby Winston Salem and the Stokes County Committee for Hanging Rock. The site was originally home to the Saura Indians and was a hideout for Loyalist during the American Revolution. Peaks in the Sauratown range in height from 1,700 to 2,500 feet. It is known as the “mountains away from the mountains” because it is not part of the Blue Ridge Mountains. There are a number of other rock formations in the park including Moore's Knob, Moore's Wall, Cook's Wall, Devil's Chimney, and Wolf Rock. 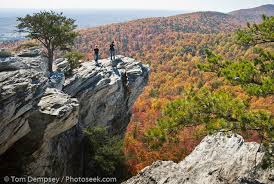 The Sauratown range was named after the Saura Indians who lived in the region. The mountains were originally much higher but millions of years of erosion lowered them to their present height.

Much of the park was developed by the Civilian Conservation Corps (CCC) between 1935 and 1942. They built roads, a parking area, and various facilities, including the bathhouse, diving tower, and beach for the newly-created lake after a dam was built during. The bathhouse was added to the National Register of Historic Places in 1991. The size of the park was increased in 2000 from just over 3,000 acres to nearly 6,000 acres.