Union Station in St. Louis, built in 1894, was once the largest railroad terminal in the world that contained tracks and passenger service areas all on one level. Theodore Link, referred to as "one of the city's greatest architects," was selected out of a closed competition to design the structure. Constructed of Indiana limestone in the then-modern Richardson Romanesque style, it was completed at the staggering cost (for the time) of $6.5 million. It was particularly praised for the beauty of its Grand Hall, with its Romanesque arches, gold leaf embellishment and stained glass windows. For 50 years, the terminal was the transportation nucleus of St. Louis, and reached its height during the 1940s, but thereafter its use sharply declined, due partly to the increasing popularity of air travel. However, by the mid-1960s, the Terminal Railroad Association began to study possible uses for the property. In 1968, it was decided to adapt it into a convention center and in the early 1980s, the station was restored at a cost of $150 million. Union Station now serves St. Louis as a tourist attraction, hotel and food court. 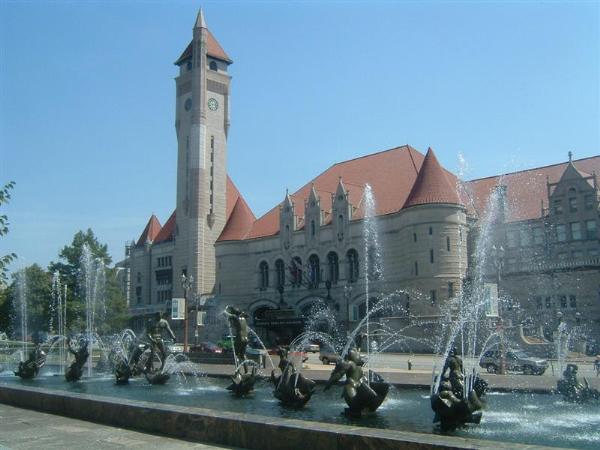 The Midway of Union Station in its early heyday 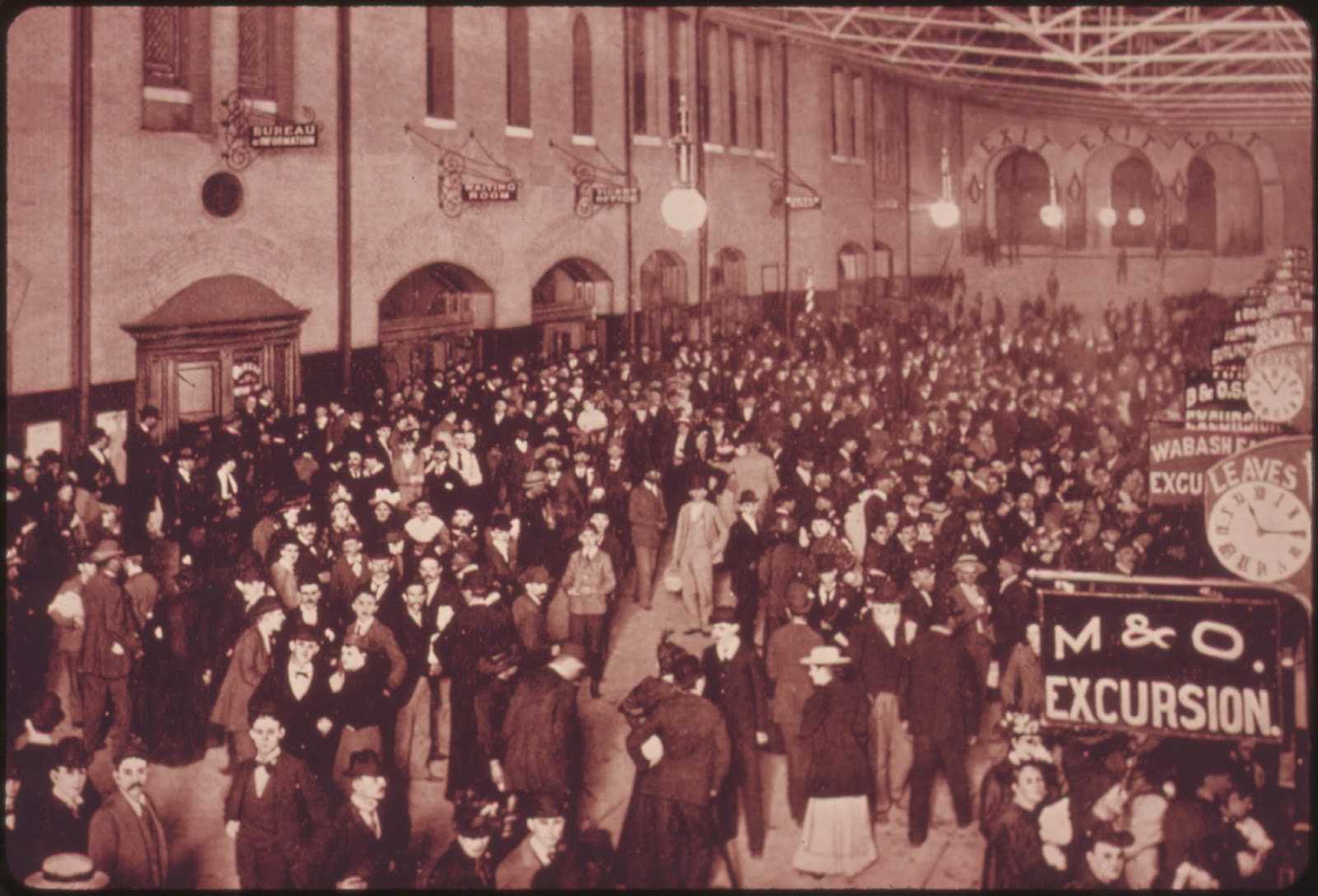 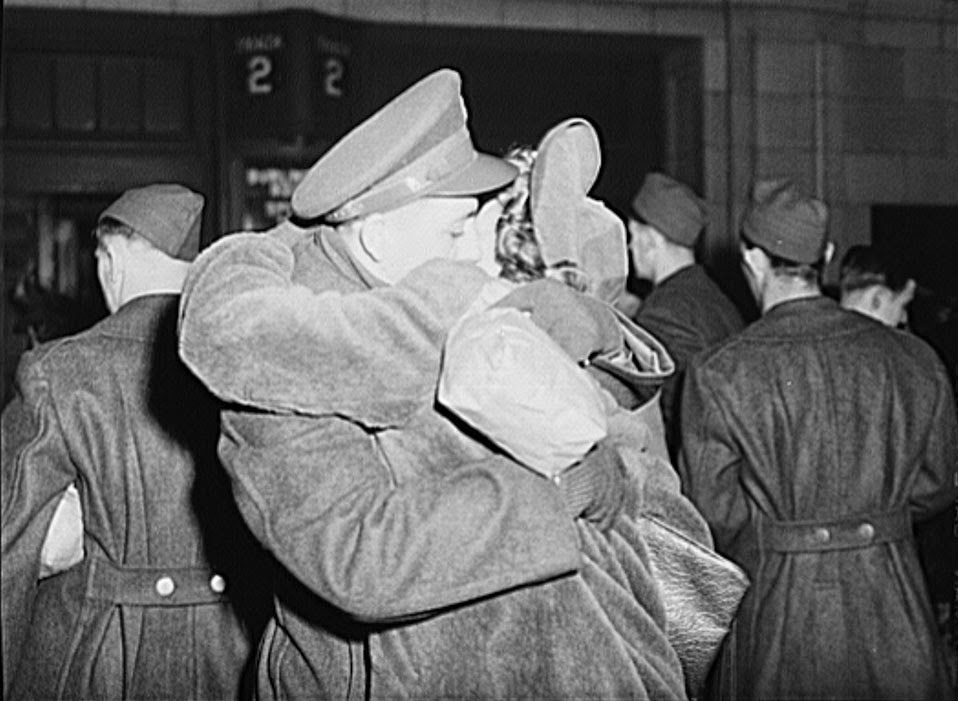 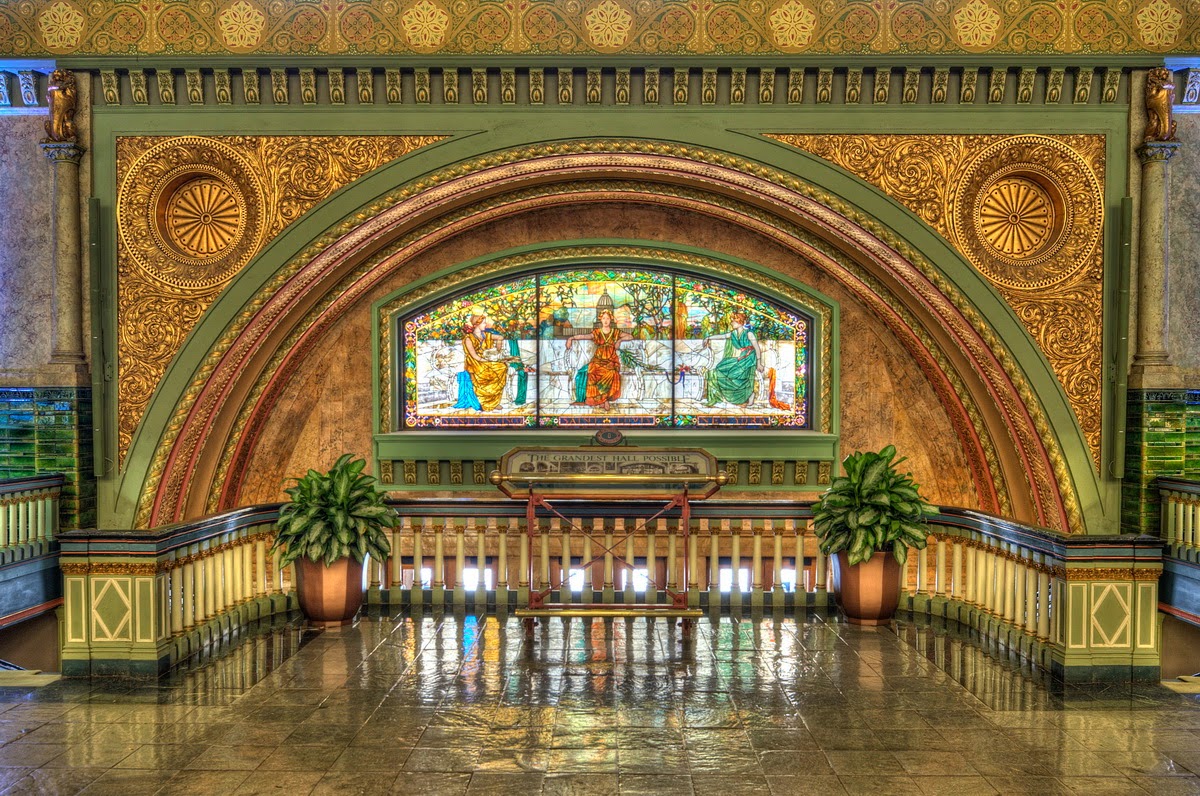 Although a St. Louis railroad depot had been built only a generation before, by the early 1890s that building was already obsolete, due to the enormous expansion of rail travel in the late 19th Century. Seven railroad companies founded the Terminal Railroad Associate of St. Louis, which proposed building a station large enough to serve the long-term transportation needs of the city. A closed competition was held among ten architects invited to submit their designs for the new building, and the St. Louis-based firm of Link and Cameron won. The co-founder of that firm, German-born engineer and architect Theodore Link, was a doubly appropriate choice because, before beginning his second career as an architect, he had been a railroad employee for many years. Link is said to have used Carcassone, a walled medieval city in Southern France, as the model for the terminal. Union Station is often considered Link's "crowning achievement."

The original structure consisted of three areas: the Headhouse, the Midway and the Train Shed. The Headhouse contained ticket offices, a hotel, a Harvey's restaurant and railroad company offices. The Midway, as its name implies, was the midway point where people gathered to greet or say farewell to passengers. The Train Shed (which was designed by George H. Pegram) contained the platforms and tracks and was one of the largest of its kind in the world, spanning eleven-and-a-half acres and containing the greatest number of train tracks within one roof. When it opened on September 1, 1894, the building's size inspired such awe that pundits predicted that the station would not be used to full capacity for a hundred years. However, within a decade, rail traffic was so heavy that the terminal needed to be expanded.

The aesthetic centerpiece of Union Station was, and is, the Grand Hall, which consists of a 65-foot barrel vaulted ceiling, Romanesque arches and stained glass windows. The most famous of the latter is the "Allegorical Window" which appears just below the equally famous "Whispering Arch" over the main entrance. The window is "allegorical" because it depicts three women in classical attire who represent the three main railroad terminals in the U.S. at the time: New York, St. Louis and San Francisco. The "Whispering Arch" received its nickname because of an acoustic phenomenon whereby one person speaking softly at one end of the arch can be heard clearly by a person standing dozens of feet away at the arch's other end.

Union Station remained very busy and successful up to the end of World War II. But as the popularity of air and highway travel increased, that of rail travel declined. The last train pulled out of the station in October 1978; by that point, time and neglect had taken its toll on the structure. In 1979, Union Station sold for $5.5 million – less money than it had cost to build 85 years before. However, a major renovation took place in the mid-1980s, in which Conrad Schmitt Studios, by using original paint schemes and newspaper descriptions from the 1890s as guides, restored the original color of the Grand Hall. The project has been called "one of the largest adaptive re-use projects in the United States." Today, Union Station is home to the DoubleTree Hotel and many restaurants. The Metro Link stop at Union Station, however, is one of the few remaining connections to the building's past as one of the great transportation hubs of the world.