Built c.1811 by Robert Carter Burwell, a descendant of Robert “King” Carter, Long Branch Plantation in Clarke County, Virginia sits in the middle of 400 acres at the northern end of the Shenandoah Valley. The house, designed by Benjamin Henry Latrobe, served as the focal point of a bustling wheat plantation in the antebellum period, and continued to serve as a farm after the Civil War. Having moved through several owners during the 20th century, since the 1990s, Long Branch has been preserved as a historic house museum open to the public.

Long Branch, courtesy of Virginia Department of HIstoric Resources (reproduced under Fair Use) 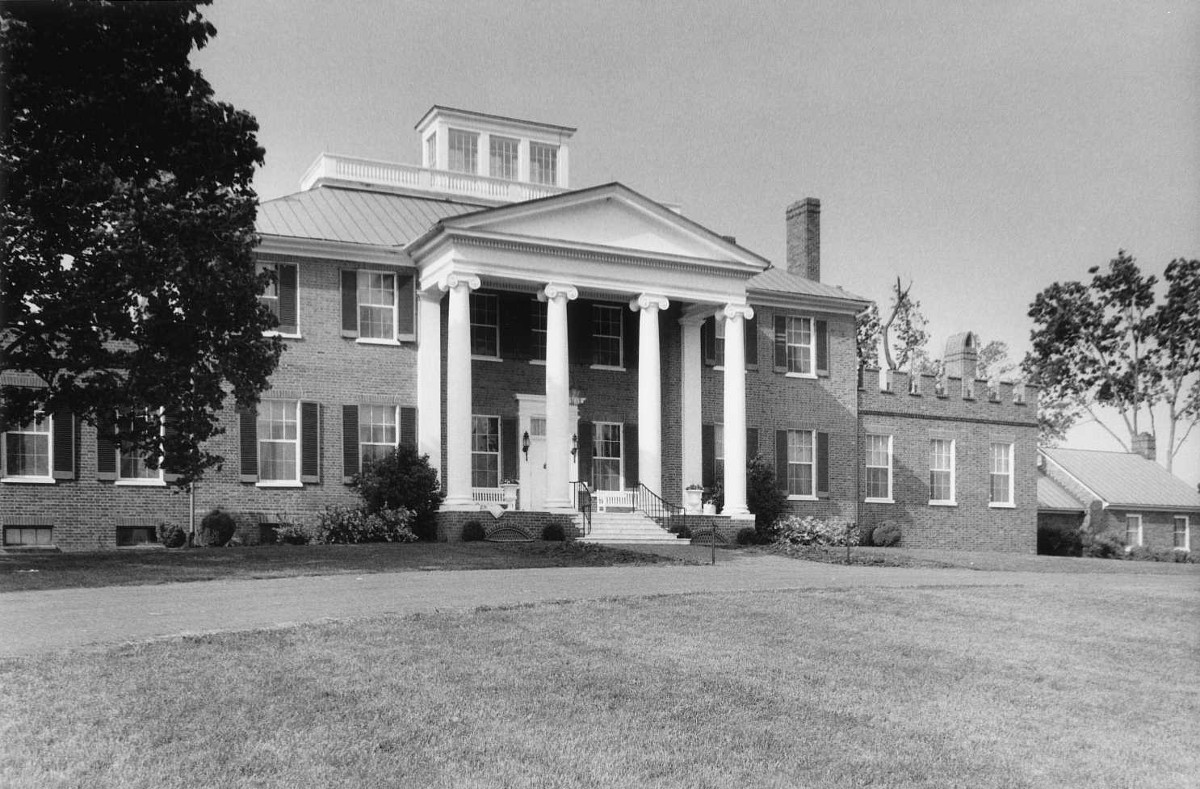 Robert Carter Burwell inherited an approximately 1000-acre parcel with a creek called Long Branch running through it in 1788 and established a wheat plantation on the land. Wheat was a major cash crop – it was ground and then sent to the coast to be shipped to Europe where it was in high demand. The plantation also held livestock including pigs, cattle, sheep, horses, and oxen. Slaves were the majority of the workforce until the end of the Civil War, when they were freed. Evidence from the 1870 census shows that at least one family stayed and worked on the farm after the war.

About 20 years after starting his plantation, Burwell began to build his home. This was designed in the Federal Style, popular in the late 18th and early 19th centuries throughout Virginia. Burwell corresponded about the design for his home with architect Benjamin Henry Latrobe, designer of the US Capitol Building, and upon Latrobe’s suggestion modified the original plans to include a secondary staircase for slaves and servants. While there is no evidence that Latrobe ever visited Long Branch, he certainly influenced the building’s design.

After Burwell’s death in 1813, the house passed to his sister, Sarah, and her husband, Philip Nelson. The Nelsons did not occupy the house until 1820, originally choosing to remain in their home at nearby Rosney, only a few miles from Long Branch. By the 1830s, the house was being used as a girls school, while Rosney was employed as a boys school. The land continued to function as a wheat plantation, but there were financial issues which resulted in Philip Nelson selling Long Branch to his nephew, Hugh Mortimer Nelson, around 1840.

Hugh and his wife, Adelaide, oversaw an extensive renovation beginning in 1842, which saw the character of the house change dramatically from the earlier Federal Style to Greek Revival. It was at this point that the impressive hung spiral staircase was added to the house, along with new interior trim, both porticos, and the belvedere. The patterns for the interior trim were taken from books by Minard Lafever, an American architect whose designs were extremely popular.

It was during this period that the house was in its heyday – the plantation was very productive as a result of agricultural advances and the Nelsons entertained numerous guests including author Washington Irving. This period of prosperity came to an end with the Civil War. Hugh M. Nelson was wounded and died as a result in 1862, after which the family struggled to maintain ownership of the house and land. Despite attempts by creditors to wrest Long Branch away from the Nelsons, through considered legal wrangling, Adelaide was able to maintain the family’s ownership of the house and farm, albeit at reduced size. During this period many possessions were also sold as a result of debts owed and the house was never fully refurnished while owned by the Nelson family resulting in the house remaining virtually unchanged from the 1860s through the 1950s.

It was in the 1950s that Long Branch left the ownership of the Nelson family. The property was sold in 1957 to Abram and Dorothy Hewitt, who raised their family and farmed cattle, corn, and alfalfa until they sold the home in 1978. The Hewitts made necessary renovations to the house, though few of these were structural changes, save work done on the building that was originally the summer kitchen, which served as Abram’s office. After being sold by the Hewitts, Long Branch went through a series of owners and speculators, slowly falling into greater disrepair.

After going to auction in 1986, the property was bought by Harry Z. Isaacs, a textile manufacturing executive from Baltimore. Isaacs completed an extensive remodel of the house, including the addition of the west wing to make the house appear symmetrical. The house was meant to serve as Isaacs’ residence; however, he was diagnosed with cancer and died in 1990 having only spent a handful of nights in the house. The house was left in the care of the Harry Z. Isaacs Foundation so that it could be open to and enjoyed by the public. Today, Long Branch serves as a house museum and special events venue, while the land is used as a farm for retired horses.