Horatio Gates Onderdonk was born in 1808 in Cow Neck (today Port Washington). He became an important early resident of Manhasset, with mercantile interests in New York City, but pursued a law degree and was admitted to the bar. He was appointed county judge of Kings County and kept law offices both in the city and in an office adjacent to his residence in Manhasset. The mansion, which was constructed in 1836, was built in the Greek Revival style. The home, which is listed on the National Register of Historic Places, was purchased by Levitt & Son in 1933, when they began the development of North Strathmore on the 46 acres bordering the north side of Northern Boulevard. 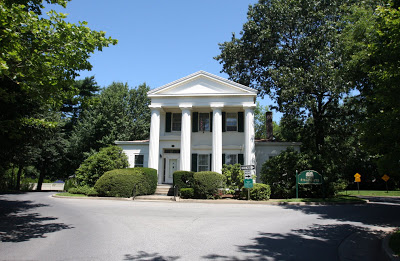 An important early resident of Manhasset, Horatio Gates Onderdonk was born in 1808. He graduated from Columbia College in 1829 and married one of his cousins, Elizabeth Schenk. The couple had six children, five of whom lived to adulthood. It is believed that Onderdonk maintained mercantile interests in New York City, but began studying law after he graduated college and was admitted to the bar. Onderdonk was appointed a county judge of Kings County by Governor William L. Marcy.

The Onderdonk mansion was built in 1836. It is a two-story Greek Revival residence, a style that was relatively common for homes that were built on Long Island at that time. The Onderdonk home is regarded as one of the finest examples of the style on Long Island. The residence is one of the only Greek Revival structures still extant in the area, giving the home an added significance.

The Onderdonk property remained in the extended family until it was purchased in 1933 by Levitt & Sons, the famed developers behind Long Island's Levittown. The firm developed North Strathmore on the 46 acres on the north side of Northern Boulevard and the residence served as an office facility for the development. In 1936, the property was recorded by the Historic American Buildings Survey. The home eventually became the property of the Strathmore Association, a membership organization made up of the owners of Strathmore property. The house along with four corner plots were transferred to the Strathmore Association in 1936 and the Association has maintained the property since that time.

The house was added to the National Register of Historic Places in 1980 and was named a landmark by the Manhasset Town Board in 1985.