This location marks the starting point of Pittsburgh’s first Pride parade, which took place on June 17, 1973. Pittsburgh was one of a growing number of cities across the United States and the world that began celebrating Pride over the course of the 1970s. Organized by the gay rights organization Gay Alternatives Pittsburgh, the Steel City’s 1973 parade was the culmination of a week-long series of events advertised under the tagline “Gay Pittsburgh is Coming Out!” The event connected Pittsburgh to a worldwide movement fighting for gay rights and societal progress. Its starting point, located in Pittsburgh’s Market Square, is open twenty-four hours a day. 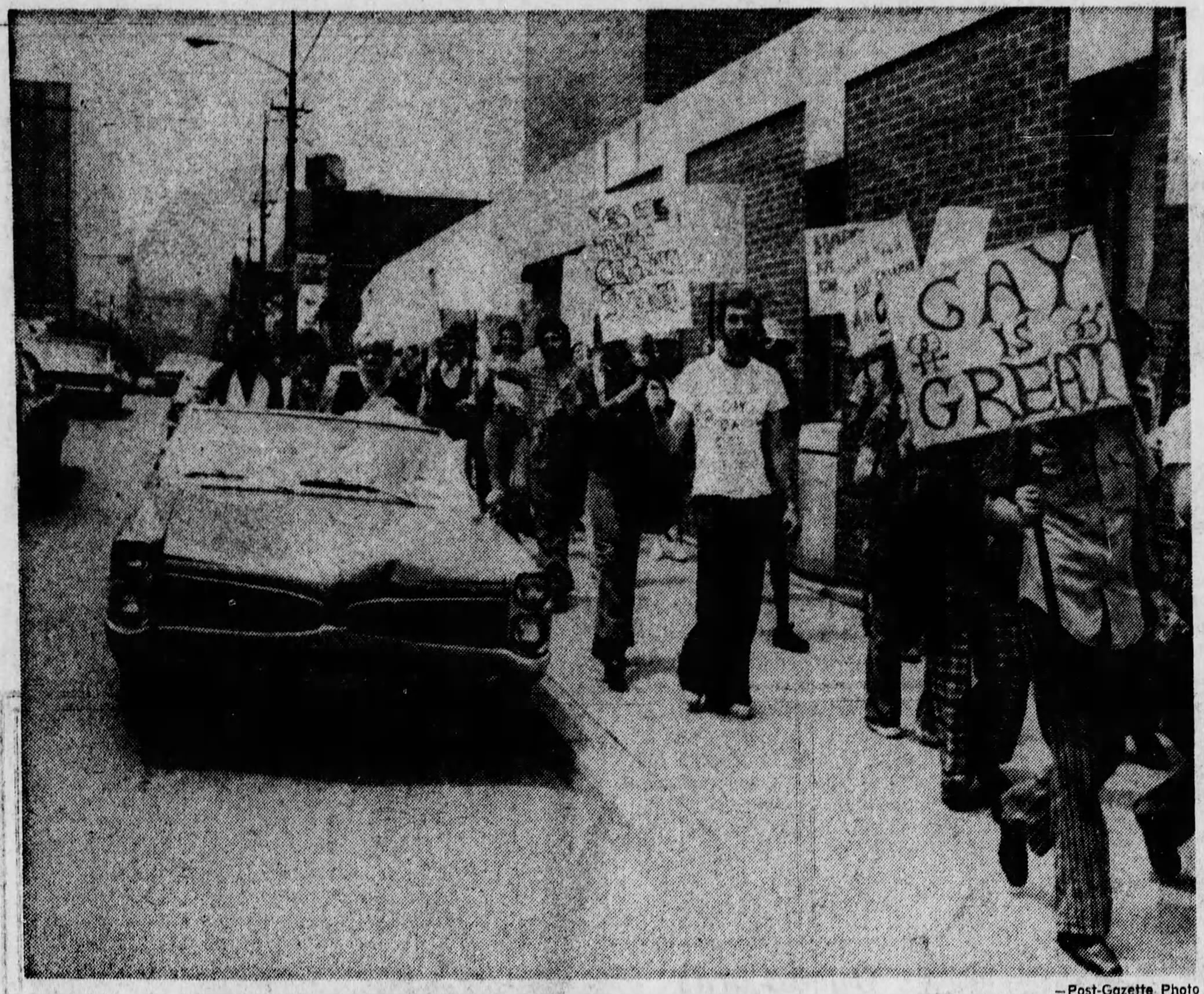 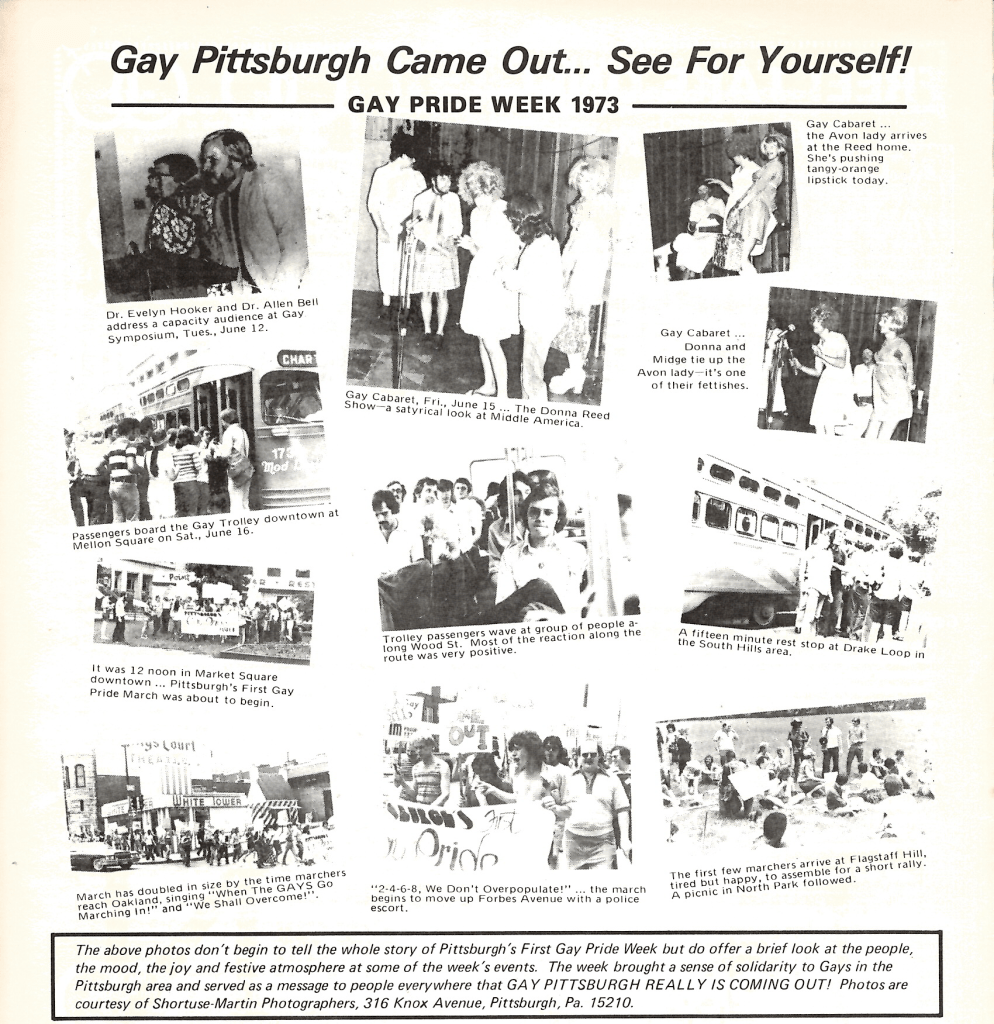 Calendar of Events Hosted by Gay Alternatives Pittsburgh in 1973

Gay rights activists organized the first Pride parades in the United States in response to the events of the Stonewall riots of June 1969. A violent raid on the Greenwich Village gay bar the Stonewall Inn by the New York City Police Department in the early morning hours of June 28, 1969 prompted a series of protests that eventually spread beyond the borders of the city to encompass LGBTQIA communities across the country. Many of the most prominent gay rights organizations in the United States got their starts in the aftermath of the Stonewall riots and released newspapers and magazines that remain in publication to this day. They were also responsible for coordinating and sponsoring the first Pride parades, which took place in Chicago, Los Angeles, New York, and San Francisco on June 28, 1970. Within two years Pride had reached international markets, with London holding its first Pride celebrations on July 1, 1972. Early Pride parades were equal parts protest and pageantry, with some marchers carrying signs calling for expanded gay rights and others wearing unconventional or outlandish costumery to challenge mainstream cultural norms. Regardless, such events were at their heart an opportunity for members of local gay communities to express their sexualities in public freely and openly.

Pittsburgh’s first Pride in June 1973 was no exception, with a week of events organized by Gay Alternatives Pittsburgh leading up to it to the parade on June 17. Organized under the banner “Gay Pittsburgh is Coming Out,” Pittsburgh’s first week of Pride events focused on providing members of the local gay community with opportunities for education, congregation, and relaxation. On June 12 the Persad Center (a Shadyside counseling center for sexual minorities) sponsored aa symposium at Benedum Hall Auditorium in Oakland with Drs. Allen Hall and Evelyn Hooker, Kinsey Institute researchers who were among the first to research homosexuality and argue against its medical classification as a mental illness. The Center also sponsored a series of workshops throughout the day for medical professionals to educate themselves on treating clients from the LGBTQIA community. The next day Gay Alternatives Pittsburgh hosted a coffeehouse at the University of Pittsburgh Student Union, the day after a Lesbian/Feminists Night at the 1209 Club on Fifth Avenue, and the following days a cabaret and party trolley. All of these events were intended, like many such across the country at the time, to give members of Pittsburgh’s gay community an opportunity to meet one another and express their sexuality openly in a public setting.

The culmination of Pittsburgh’s first Pride festivities, the parade on June 17, was likewise a moment to celebrate gay culture and press for gay rights. Setting off at noon from Market Square in downtown Pittsburgh, the parade trekked along a nearly four-mile walk that ended with a picnic on Flagstaff Hill in Schenley Park near Oakland. Despite an almost entirely uphill parade route and seasonably hot weather, marchers in the parade maintained their enthusiasm throughout the event. Chants of “Come Out, Come Out Wherever You Are” and “2-4-6-8, We Don’t Overpopulate,” washed over bystanders on the streets of downtown Pittsburgh as the parade’s 50 to 100 participants marched toward their destination in various degrees of genderbending dress and panoply. One notable marcher was Marcelus Luck III, referred to by fellow marchers simply as “Brother,” who carried a seven-foot pet boa constrictor throughout the two-and-a-half-hour trek to Oakland. Unfortunately, the heat proved too much for the snake, who perished along the way. Despite this loss, the parade’s participants considered more or less a rousing success. When they arrived at Flagstaff Hill for their picnic, they ended the parade with applause and declarations that the event was only the beginning of their community’s fight for progress in Pittsburgh.

Their sentiment certainly held true throughout the 1970s, with Pride parades taking place every year in a number of different locales across Pittsburgh from 1974 to 1980. Marchers continued to use the parades as an opportunity to celebrate their sexuality in an open, public setting while demanding expanded civil rights protections from city officials. Like many other Pride celebrations across the United States, however, Pittsburgh’s LGBTQIA community did not organize Pride events throughout 1980s. The resurgent conservatism of the Reagan presidency combined with the HIV/AIDS crisis of that decade drove many gay rights organizers to put Pride celebrations on a backburner in the face of political and existential threats to their community’s existence. As with their compatriot organizations around the world, Pittsburgh Pride returned with enthusiasm in 1991. That year almost five hundred marchers followed a parade route from the Civic Arena to the Point, while twice that number repeated the feat in 1992. Thousands upon thousands of attendees flock to Pride today, making it the largest parade in the Pittsburgh area. The ups and downs of Pride from 1973 to today represent a historical progression that connects Pittsburgh to a much larger national and international queer community.