The Indian Creek Covered Bridge was built circa 1898-1903 by two brothers, Ray and Oscar Weikel. Only sixteen and eighteen at the time, the brothers used the Long truss style to create the fourteen foot wide by fifty foot long bridge. The bridge fell out of use in 1929 and was in disrepair when the Monroe County Historical Society acquired it in 1965. The historical society restored the bridge as closely as possible to its original state while attempting to maintain the historical integrity of the structure. The bridge was repaired again in 2000. Alongside Laurel Creek Covered Bridge, Indian Creek Covered Bridge is one of only two extant covered bridges in Monroe County. 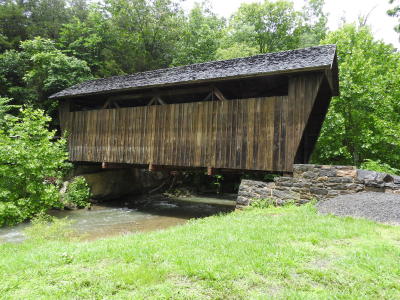 Interior view of the bridge. The Long trusses used are visible 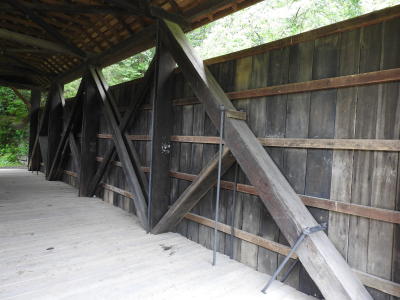 Architectural sketch of the Long trusses used for the bridge

In 1898, the Monroe County Court expressed interest in creating a new bridge over Indian Creek to make agricultural transport easier. Brothers Ray and Oscar Weikel were awarded the contract despite being only sixteen and eighteen years old, respectively. Their uncles, established sawmill owners in Monroe County, served as guarantors for the work of their nephews. The brothers immediately set up their own sawmill adjacent to the site of the new bridge. Initial court plans for the Indian Creek Covered Bridge utilized an arched structure. However, the Weikels presented designs for a flat bridge that were accepted.

Oxen delivered timber to the Weikel’s sawmill to be shaped for the bridge. Horses and wagons delivered the finished pieces from the sawmill to the bridge site. The Weikels designed a geared machine operated by teams of four men to lift the enormous beams into place with less effort than hand-placing them. All components of the bridge were made by the brothers except for the iron rods, nails, and shingles. The bridge was completed at some point between 1898 and 1903. Ray and Oscar were paid $400 for their work – approximately $12,000 adjusted for inflation. Though this seems like low compensation for their work, the Weikel’s success with the bridge established them as qualified carpenters within Monroe and Greenbrier County.

In addition to the superstructure built by the Weikel brothers, the Indian Creek Covered Bridge rests upon limestone abutments. It is extremely unlikely that the brothers built the abutments. Masonry and carpentry were skilled labors requiring specific study. The ability to do both is relatively unprecedented and unnecessary. It is possible E. P. and A. P. Smith created the abutments, as they are mentioned as builders of the bridge by the West Virginia Department of Transportation, but this is speculative. In any case, the abutments are fitted without mortar and have required no modification or reinforcement over the years – a testament to the high quality of craftsmanship.

For thirty years, the Indian Creek Covered Bridge served its local community. In 1929, it was abandoned and fell into disrepair. The Monroe County Historical Society immediately began restoration when they leased the bridge in 1965. This included repairing siding, replacing the floor, and re-shingling the roof. For many years, the historical society used the bridge to house a collection of horse-drawn vehicles. In 2000, the bridge was restored once again by Hoke Brothers Construction for $334,446. This restoration involved repair of the trusses, another new deck, new siding, and a new roof of split shakes. These days, the bridge serves only pedestrian traffic. One of only two extant covered bridges in Monroe County, the Indian Creek Covered Bridge stands as a monument to the ingenuity of two teenagers in a remote community.