The apartment building overlooking Central Park at 135 Central Park West is The Langham. The 12-story French Beaux Arts style building was finished in 1906 and was designed by Clinton and Russell. Ads for the newly-opened building called The Langham the "latest and most magnificent, absolutely fireproof housekeeping apartment building in the City." Each suite of ten to eleven rooms with three baths was touted as "a private dwelling of the highest type." One nifty feature of the building was a mail delivery conveyor system direct to each apartment. Each apartment was connected to a central vacuuming chute - dubbed "pneumatic vacuum cleaning" and contained a wall safe. The Langham is part of the Central Park West Historic District and is still a rental building with 64 units currently.

1906 sketch of The Langham from newspaper advertisement (The Langham) 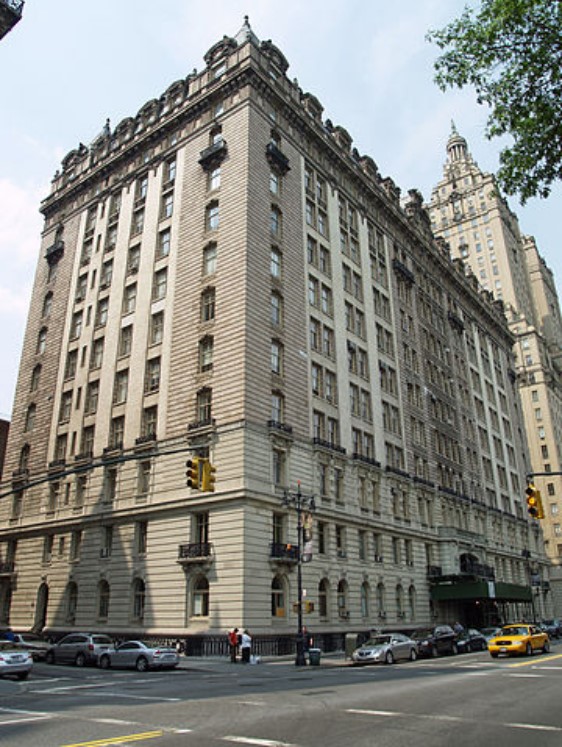 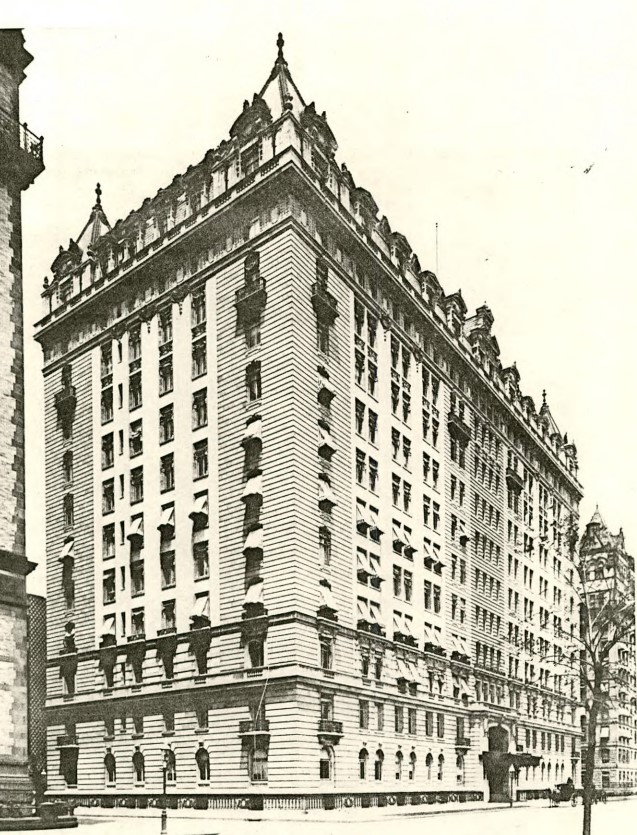 Before the street grid was laid in this annexed part of New York, the land where The Langham would be built was owned by Sarah Magee and then Samuel Wells. Edward Clark, an executive with Singer Sewing Machine Company, bought lots along Eighth Street (later Central Park West) in 1877 between W. 72nd and W. 74th Streets in 1877. To lure the wealthy to occupy the West Side, he urged the West Side Association in 1879 to issue restrictive covenants and create exclusive residences. Clark set an example by building The Dakota Apartments (also a Clio entry) on Eighth between W. 72nd and W. 73rd from 1880 to 1884. Clark died in 1882, before The Dakota was finished. Ambrose Clark sold the eight lots on the block directly north of The Dakota to Abraham Boehm and Lewis Coon in 1902.

The 12-bay wide Langham apartment building takes up the entire block from W. 73rd to W. 74th Streets between the Dakota and San Remo apartment buildings. Dawson & Archer built the structure with a rusticated limestone base and brick above. Some of the units feature a wrought iron Juliet balcony. The slate and copper mansard roof features corner peaks, pedimented dormers, and oeil de boeuf (a fancy French name for a round window resembling the eye of an ox). The original floor plan of The Langham included only four apartments per floor; most have been divided into smaller units. Two specially-configured doctor's suites were available. The lobby was especially fancy, with crystal chandeliers, marble, bronze, and carved stone decoration. A driveway entrance off of 73rd Street allowed for carriage access. Yearly rents when the building opened in October 1906 were $4.500 and up.

The Langham Apartments was purchased by Nat Natanson from the Greenhut estate and then quickly sold to Abraham Crosney and Joseph Freedman in 1919. A couple of electrical engineers named Louis K. Comstock and Edgar Ellinger purchased the building in late 1920. The interior of the Langhorne underwent major remodeling from 1958 to 1960. The building was still operating as rental apartments in the mid-1970s when it was documented for the New York State Division of Historic Preservation. The structure is part of the Central Park West National Register Historic District, listed in 1982. The historic district includes practically every building standing along Central Park West adjacent to Central Park except for a few modern replacements in the south end near Columbus Circle and one oddball 1960s style apartment building in the north half that does not blend in. Actress Mia Farrow and Musician Carly Simon are some of the most famous residents of The Langham. Early notable residents were actor Basil Rathbone and Irving Bloomingdale (son of the store founder).

The building is now configured into rental apartments with from one to six bedrooms. Restored wood-paneled libraries and multiple fireplaces grace some of the units.