The Anderson Township Historical Society (ATHS), founded in 1968, owns the Miller-Leuser Log House. The first owner of the house was Captain Matthew Jouitt, who served in Virginia during the Revolutionary War and was granted 600 acres of land as a token of gratitude for his service during the war. The house dates back to 1796 and was lived in almost consistently until the latter half of the twentieth century. The house and its surrounding land were purchased by the ATHS in March of 1971. 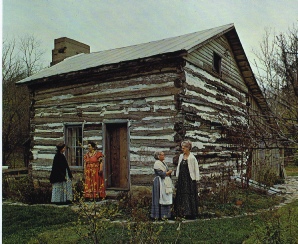 Room dedicated to the history of the Anderson Township

The Anderson Township refers to an area in Southeastern Ohio that includes Cincinnati. The ATHS was founded in order to preserve and promote historical knowledge and artifacts of the Anderson Township. The first settlement in the township was likely near the mouth of the Little Miami River. These early settlers probably were moving west from Pennsylvania. The township grew as a result of farming outposts and continued to grow throughout the nineteenth century. The township has consistently grown since then and still continues to grow to this day.

In a different location than the log cabin, the ATHS also has a history room inside their history center that tells the story of the Anderson Township from antiquity into the present. The museum includes information about the truly ancient people of the Paleo-Indian Occupation (14,000-8000 BCE), later Native American populations, to early immigrants to the area all the way up through Anderson Township in modern times. The house also includes a corncrib, which was used to store and dry corn. Volunteers from the ATHS lead tours Sunday-Wednesday afternoons and on Tuesday nights.