If you have never heard of the Amarugia Highlands of Cass County Missouri I recommend you continue reading. The Amarugia Highlands are unlike anything you have ever heard of. A kingdom resided there even after the United States were established. Names like Cole Younger and the James boys are involved. Events like the Civil War and organizations like the KKK all have connections to this place. Even today people still visit not only for the geographic aspect but also hoping for a thrill. Do you want to know more? Well I guess you will just have to continue reading. 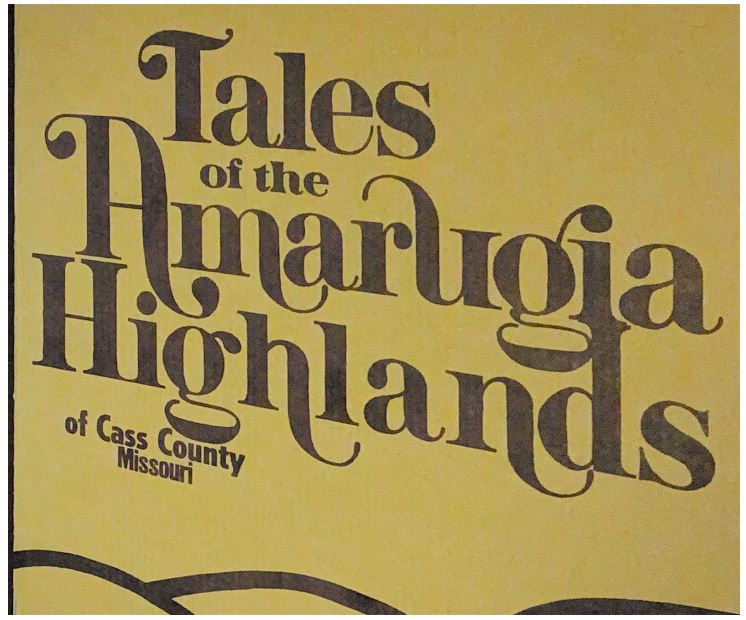 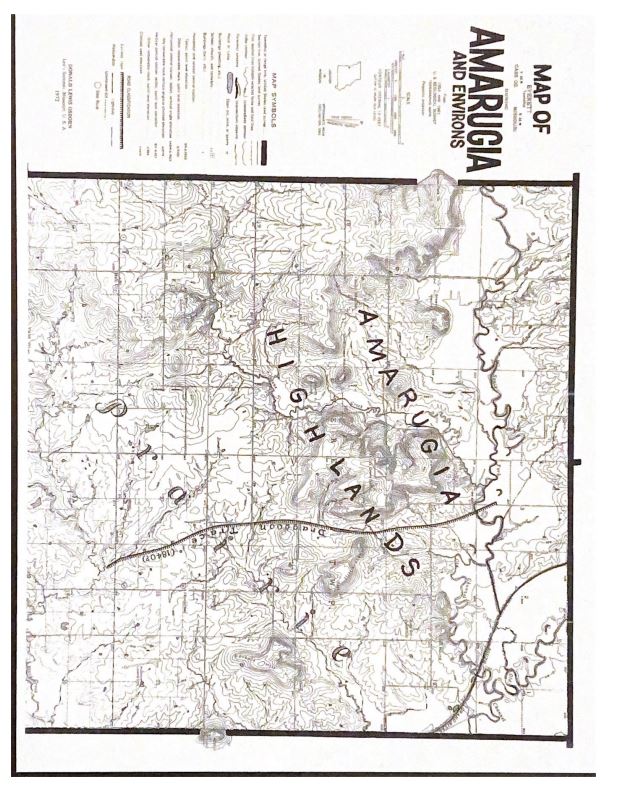 The Amarugia Highlands of Cass County Missouri is a 1,081.4 - acre area of land with countless tales that go with it but hardly any of it documented. There are many assumptions as to where the name originated from, but there is no solid evidence as to where the name "Amarugia" came from. A good portion of the history comes from the Shipley family where Anna (Shipley) Hocker wrote in diary about her ancestors and small stories from documents or interviews throughout history. However, most of the Amarugia Highlands history stems from “The Kingdom of Amarugia” where a kingdom of fur traders was built, and a king ruled over his subjects. Other tales include names like Jesse James and Cole Younger and events like the Civil War and organizations like the Klu Klux Klan. There are several connections to the Amarugia Highlands to events in history, however the local lore and ghost stories are what makes the highlands even more intriguing.

The Amarugia Highlands were bought in 1983 by the Missouri Department of Conservation. Today, the Highlands are known for the various terrain and the main attraction being the 45 – acre lake which has become home to several fish. The 45 – acre lake is man made and was not completed until 1987, then in 1988 the Missouri Department of Conservation stocked the lake with channel catfish, largemouth bass, and bluegill. In 2014 the lake was renovated and in 2016 the lake was restocked with the addition of redear sunfish. The Amarugia Highlands are open to visitors where they are able to walk the trails, trap shoot, bird watch, hunt, fish, and use the boat ramp to enter the lake.

What most people do not know about the Amarugia Highlands is that it once was a kingdom. This may seem strange that there is a "Kingdom" in the United States after it became an independent country in 1776. The Kingdom of Amarugia was a silent society that rarely any one claimed to have lived there and is why there is so little information about it. It was called “The Kingdom of Amarugia” and it is said that the first of the settlers there arrived in 1513, however most of the history begins over 300 years later in the early 1800s. In 1830 Basy Owens and others made their way to Amarugia and saw the location as a good settling ground for their fur trading post. Soon after settling in Amarugia it became clear to Owens and others that a government needed to be established. The government that was established made Owens the king and the fur trading business became their livelihood. The kingdoms prosperity was short lived when they began to realize they were starting to run out of animals for their fur. Soon after The Kingdom figured out the tribes of the Indiana Prairie were their problem, and the Indianians began invading the kingdom and ended up capturing their king in hopes that ransom would be paid. The Kingdom did not feel that it was a good idea to ransom their king and he came to an early grave from disease. The king’s son Owens II took over reign and the warfare between the Indianians began.

The warfare was trivial and only consisted of the Indianians coming on to Amarugian soil and stealing their game, wood, and other petty raiding. Eventually, peace came over both the Amarugians and the Indianians and there were many more years of prosperity throughout the kingdom. However, Owens II death caused political anguish because he did not have an heir to the throne. It was eventually voted that Sir Thomas Bundy would be king and the kingdom was once at peace, but once again the peace was short lived. Enemies of Bundy caused for more political strife and Bundy was banished, and once again Amarugia was left without a king. The kingdom was now split in half and warfare was on the horizon of The Kingdom of Amarugia. The Duke of Wellington was eventually named king and he immediately established good relationships with the neighboring nations and created peace with his subjects. The Kingdom of Amarugia finally was set on a path for an endless amount of peace and prosperity. At this time, 1889, the kingdom was still at peace and Wellington was still in power with his son, Count Samuel, and his daughter in law, Clara Garrett. The kingdom does continue to live on past 1889, however there is no written evidence to confirm the rest of the kingdom’s history.

The Shipley family lived in and around The Kingdom of Amarugia. The Shipley family history is when you can see that the United States government had power over the kingdom and that it was not just the monarchy in the kingdom that was in power. It was almost as if the kingdom that housed themselves in the Amarugia Highlands were a society and kingdom of their own, but still felt the effects of the government that was ruling the country they lived in. In 1860 when the Civil War began the Shipley family, being originally from the South, were sympathizers of the Confederacy. In 1863 Kansas City, MO issued the Order No. Eleven, which required everyone to move to county seats so that they could be protected. William Shipley was fighting for the Confederacy at the time, so Amanda Shipley, William’s wife, moved her family to Harrisonville, MO from their family farm in Amarugia to remain safe. However, one of William and Amanda’s sons chose to leave and fight for the Union Army at only 14 years of age. Left with three children, Amanda made a home in Harrisonville but soon realized her son Preston was getting into trouble arguing with Northern sympathizers. Amanda Shipley sent her son with Cole Younger, and the James boys and they soon found that Preston was too young to remain with them and dropped him off at a farm in Peculiar. Once the war was over William Shipley came home to find that his wife Amanda had passed away from disease after being thrown in jail for singing confederate songs. Preston was working for the Harrelson farm when he met his wife Sarah (Sally) Hackler and remained in Peculiar and had their first five children. Preston and Sarah then moved to Amarugia where they had three more children and acquired the family farm that William and Amanda once lived in. In March of 1898 the house at the family farm burnt down and the Shipley’s did not have insurance on their home. The neighbors came together to get the supplies to help build another home where the old one stood. In 1909 Sarah lost her life to heart complications and two of their children remained in home with Preston until his death in 1922. This is the only documented family history that shows generations living in The Kingdom of Amarugia.

There are many stories and local lore that are told about the Amarugia Highlands of Cass County. Donald Lewis Osborn, 1972, documents rumors of buried treasure, ghost stories, and mystical powers. It is rumored that there is buried treasure in the Amarugia Highlands. Rumor has it that a man had a home located on a hill and he could see the spot where his buried treasure lied. It is also reported that a lady from Amarugia was able to communicate with the dead by tapping or knocking. Crowds of people would go visit this woman in hopes to communicate with their dead loved ones, but it was rumored that the woman did the tapping herself. According to a Amarugia Highlands inhabitant there was a man that had the power of stopping someone from bleeding. It is said that the man’s granddaughter was cut very badly on her arm, he said a few words under his breath, and the bleeding instantly stopped. The man said that he could teach his power to another person, but they had to be female. The man had attempted to teach this power to his daughter in law and failed. Local lore has also stated that the Klu Klux Klan has used the Amarugia Highlands for their meetings. This rumor is not a surprising one because the KKK was a very prominent organization in Cass County, MO.

As you can see the Amarugia Highlands are not just a conservation area. There is so little documentation on this historical site, but the documentation that is there tells us how important it is to preserve its memory. The history of The Amarugia Highlands is few and far between and most of it comes from personal stories from those who have heard stories that have been passed down, those who have lived there since the kingdom, and those who still visit today. Personally I believe it is hard to tell what is true and what is not and with so little documentation it was hard to compose as much as I did. The Kingdom of Amarugia is a crucial part of the highland’s history and most of that history takes place throughout the 19th century. The Shipley family is the only documentation of generations living in Amarugia and it was only about their family tree. There are still rumors today of the Amarugia highlands and I guarantee if you go up to someone from Cass County, MO they can tell you all their memories of it growing up. I know I have some memories of my own. Many people today still take adventures to Amarugia during the night for the thrill of maybe seeing a ghost or even a KKK siting.