The "Malice at the Palace" at The Palace at Auburn Hills

The Palace at Auburn Hills was the site for three NBA Championships won by the Detroit Pistons and three WNBA Championships won by the Detriot Shock and one of the most infamous and controversial fights in NBA history. The two teams that were involved in this fight were the Detriot Pistons and Indiana Pacers. These two teams met in the Eastern Conference Finals the year before where Detroit ended up winning the NBA Championship. So with those prior meetings there was already bad blood between the team. This fight changed the course for the Indiana Pacers that season and the culture of the NBA till this day. 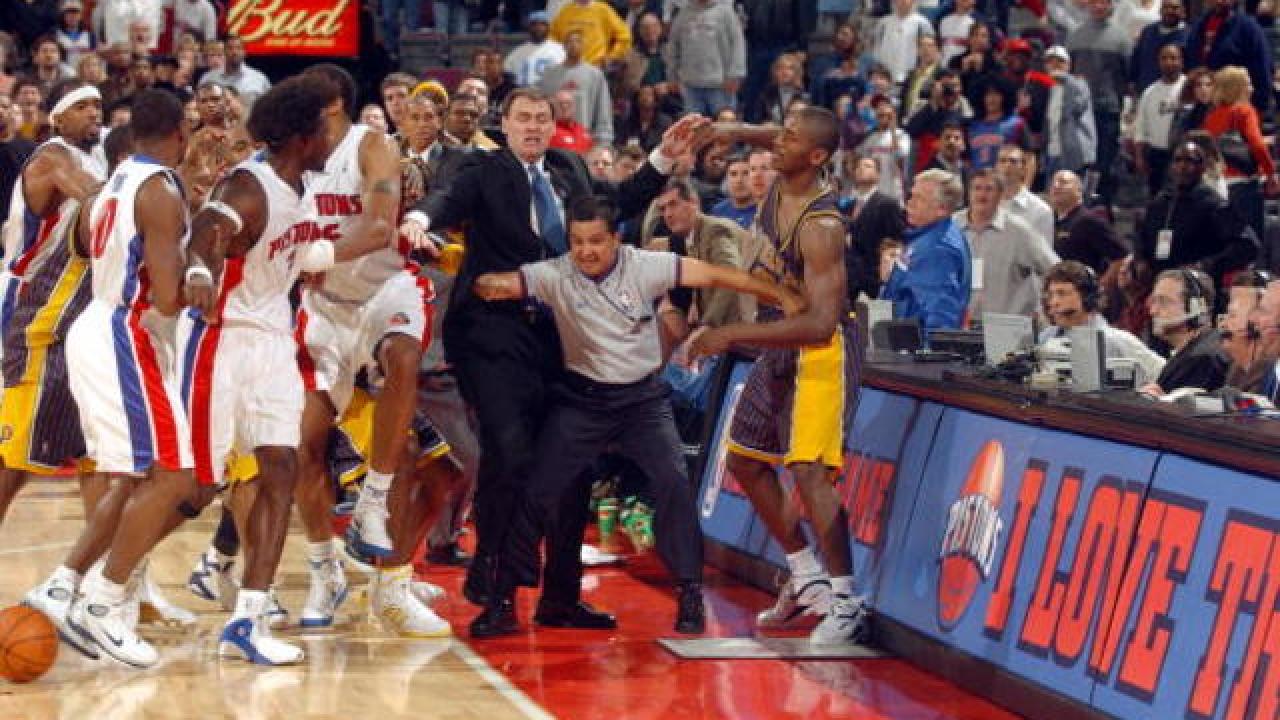 Fan who threw the cup of beer. 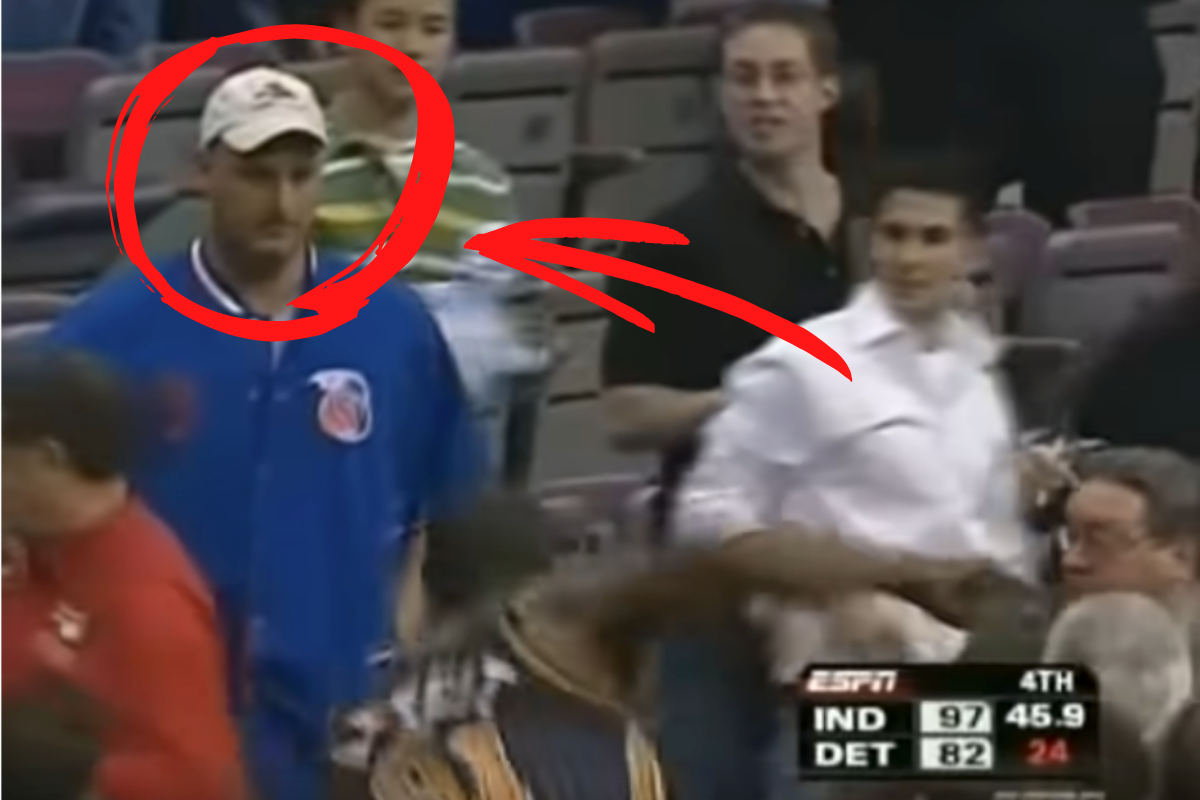 Aftermath of the fight 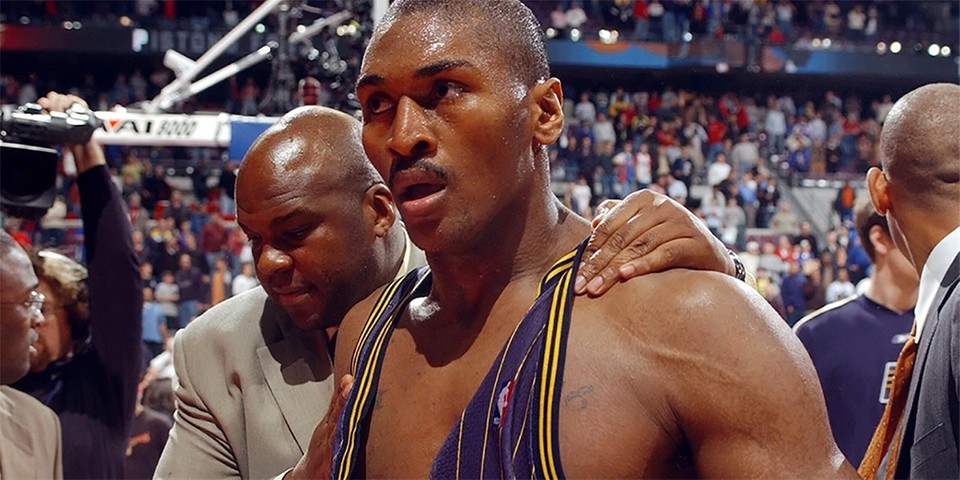 Interaction with fan and Ron Artest 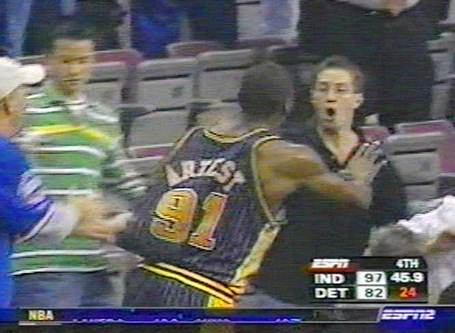 It was a good game throughout, but then madness ensued. With 45.9 seconds left in the game, the Pacers were leading the Pistons 97-82. When Piston’s center Ben Wallace went up for a layup, Ron Artest of the Pacers shoved him during the layup. Ben Wallace responded by pushing Ron Artest. The two teams got into a little scuffle. As the teams were settling down, Ron Artest was laying on the scorer’s table when a fan threw a cup full of beer at him. Ron Artest retaliated and ran up to the stands to fight the fan, his teammate Stephen Jackson followed. Ron Artest got up to the fan and started fighting him, unfortunately, Ron Artest was fighting the wrong fan. As this fight was happening, the stadium was going insane. After some time, Ron Artest made his way back to the floor when a fan approached him and Jermaine O’Neal. Artest and O’Neal punched the fan and hit him to the ground. The cops and security finally showed up and escorted both teams to the locker rooms. The remaining 45.9 seconds of the game were never played.

As for the players, multiple suspensions were handed out. Ron Artest, who was the main player in the fight, got suspended for 73 games and the remainder of the season, Stephen Jackson, who followed Artest up the stands, got a 30 game suspension, Jermaine O’Neal got suspended 25 games, Ben Wallace got suspended 6 games, and lastly all the players who left the bench got suspended for one game. There was controversy behind Jermaine O’Neal’s suspension because of the circumstances. The fan ran out on the court and charged O’Neal, so O’Neal punched the fan. A court judge ruled that Jermaine O’Neal was acting out of self defense. NBA Commissioner at the time David Stern didn’t pay any mind to that ruling and held up the suspension.

Many new rules were put in place for fans after this incident. There was a cap put on the amount of alcoholic beverages a fan could buy, a cap on the size of the cups alcohol is put in, and a nine point code of conduct for fans.