Cadillac Ranch, a public art installation composed of a line of Cadillacs buried nose-first in the ground, defies an easy explanation. It was created over thirty years ago as a collaboration between Panhandle native Stanley Marsh 3 and members of the 1970s San Francisco art group "Ant Farm." Marsh, a practicing artist and patron whose later works favor facsimile road signs with odd sayings like "Road Does Not End," explains the initial meaning of the car sculpture this way: "Cadillac Ranch is a monument to the American Dream. And the dream of most American boys when I was growing up was to get a Cadillac, or a car of any kind. A car represented money (it was the first valuable thing we ever had), it represented sex (it was where you had dates), and it represented getting away from home. And I assure you those were the three things that were on our mind when we were sixteen." Since its creation, however, Cadillac Ranch has come to mean much more, serving as a popular pilgrimage site for public art enthusiasts.

Example of what to expect at Cadillac Ranch 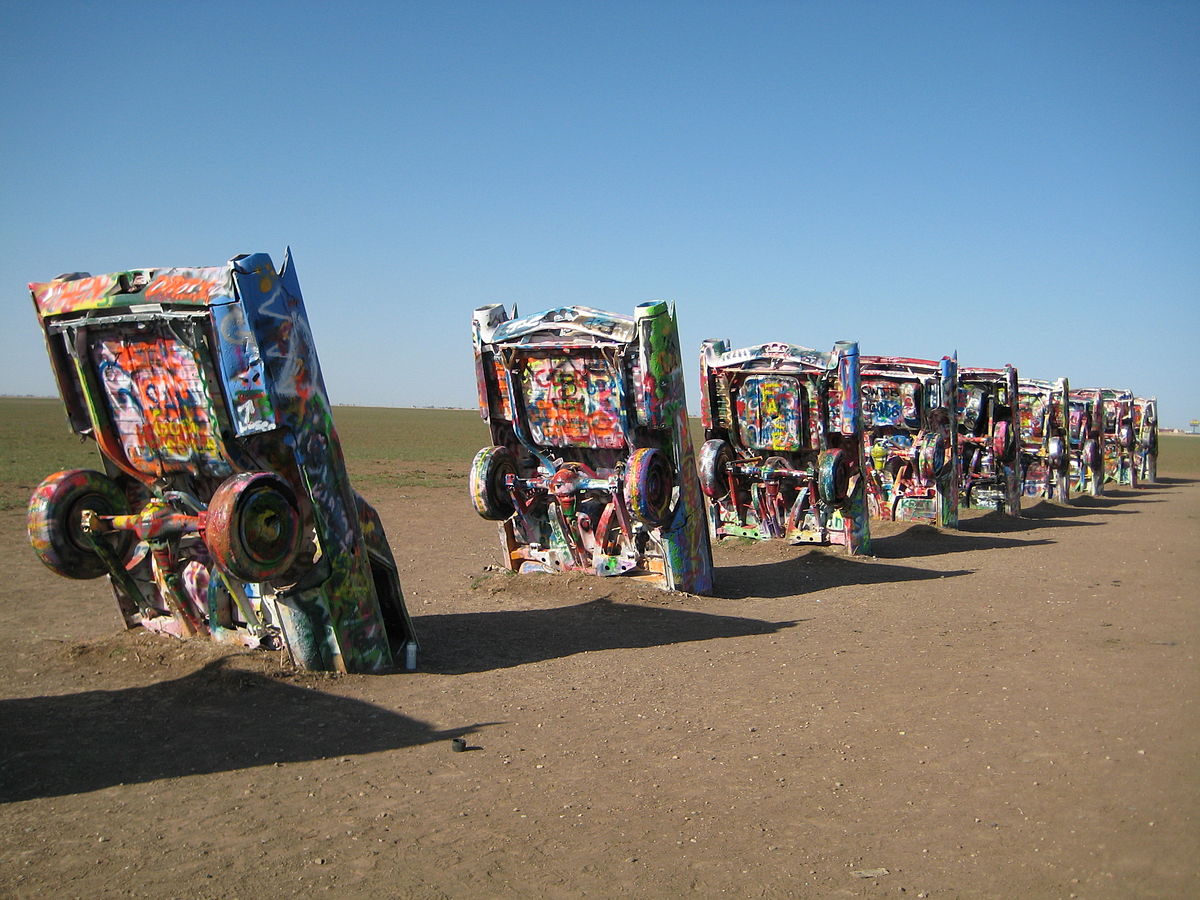 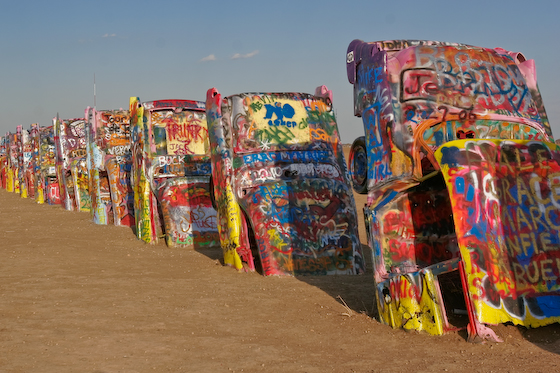 Marsh and Ant Farm set about acquiring ten used Cadillacs, ranging in model years from 1948 to 1963. Built along the tattered remains of historic Route 66, the cars were meant to represent the "Golden Age” of American automobiles. Most of the cars were purchased from junk yards, and averaged about $200. The cars were then buried nose-down, facing west along the old highway. Those that could run were driven into the half-burial holes, while the rest were hoisted in. In 1974, the project was completed and visitors began to come from all over the world, leaving their mark on the ever-thickening graffiti covered cars.

At first, the cars displayed their original paint jobs, such as turquoise, banana yellow, gold, and sky blue. However, this changed when people were scratching or painting their names in the cars. Vandals and souvenir hounds smashed the windows, made off with all the chrome, radios, speakers and even some of the doors. The wheels have since been welded to the axles to prevent more theft. However, Marsh still says "We think it looks better every year.”

Nowadays, the art exhibit unofficially invites public participation in modifying the designs and colors of the work's ever-changing surfaces. This transformation of meaning (and looks) fits Marsh's approach to art, one that exchanges traditional ways of interacting with art for a more integrative approach.

In 1997, the Cadillac Ranch was exhumed and replanted about two miles to the west, in order to escape the encroaching city of Amarillo. Under Marsh’s orders, even the old site’s trash and clutter was gathered from the old location and spread around the new location. Otherwise, the monument remains the same (and, ever changing) since it was erected.

According to Marsh, "Art oughta be under the underpasses, in the supermarkets, at the filling stations, on the side of road, in the mall where you don't expect it. It oughta come as a surprise."