This building in the Strawberry Hill historic neighborhood has a long and varied history, beginning with its construction in 1887. It was the mansion residence of Margaret Cruise Scroggs’s family for over 30 years, a fine example of Queen Anne Victorian architecture. In 1919, the home was purchased by the St. John the Baptist Catholic Church for use as an orphanage. The church added four large additions onto the home over the next few years. The Sisters that ran the orphanage served over 3,000 children over the course of 70 years in operation. In 1988, the building reopened as a museum dedicated to preserving the history and culture of the Eastern European immigrants that have called the Strawberry Hill neighborhood home. 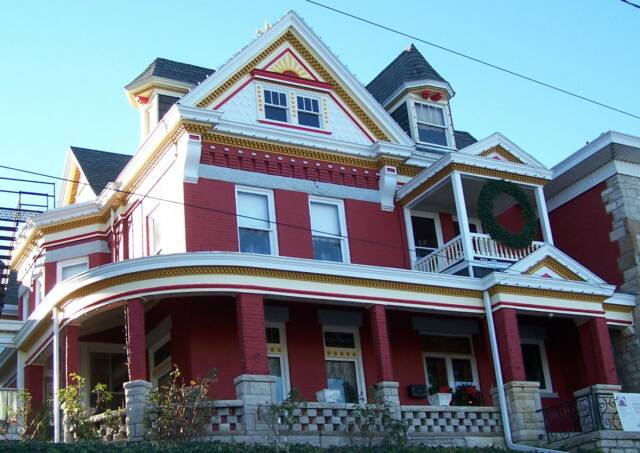 Details of the staircase of the mansion 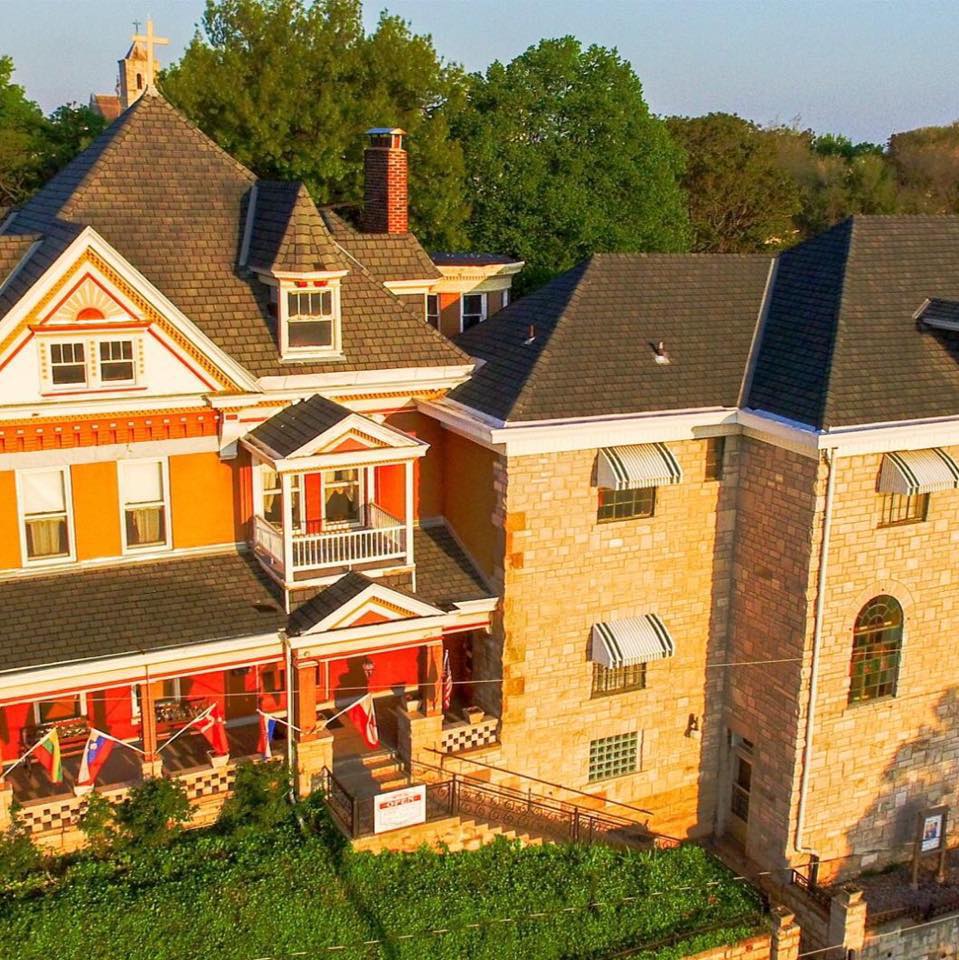 The historic home decorated for the holidays 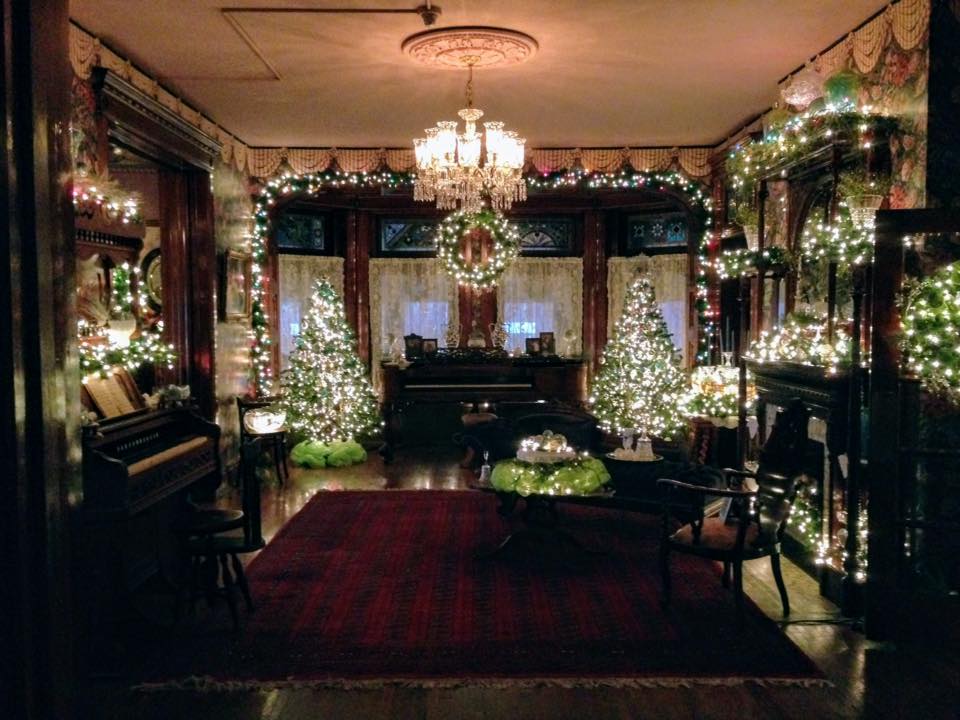 The chapel inside one of the stone additions to the building 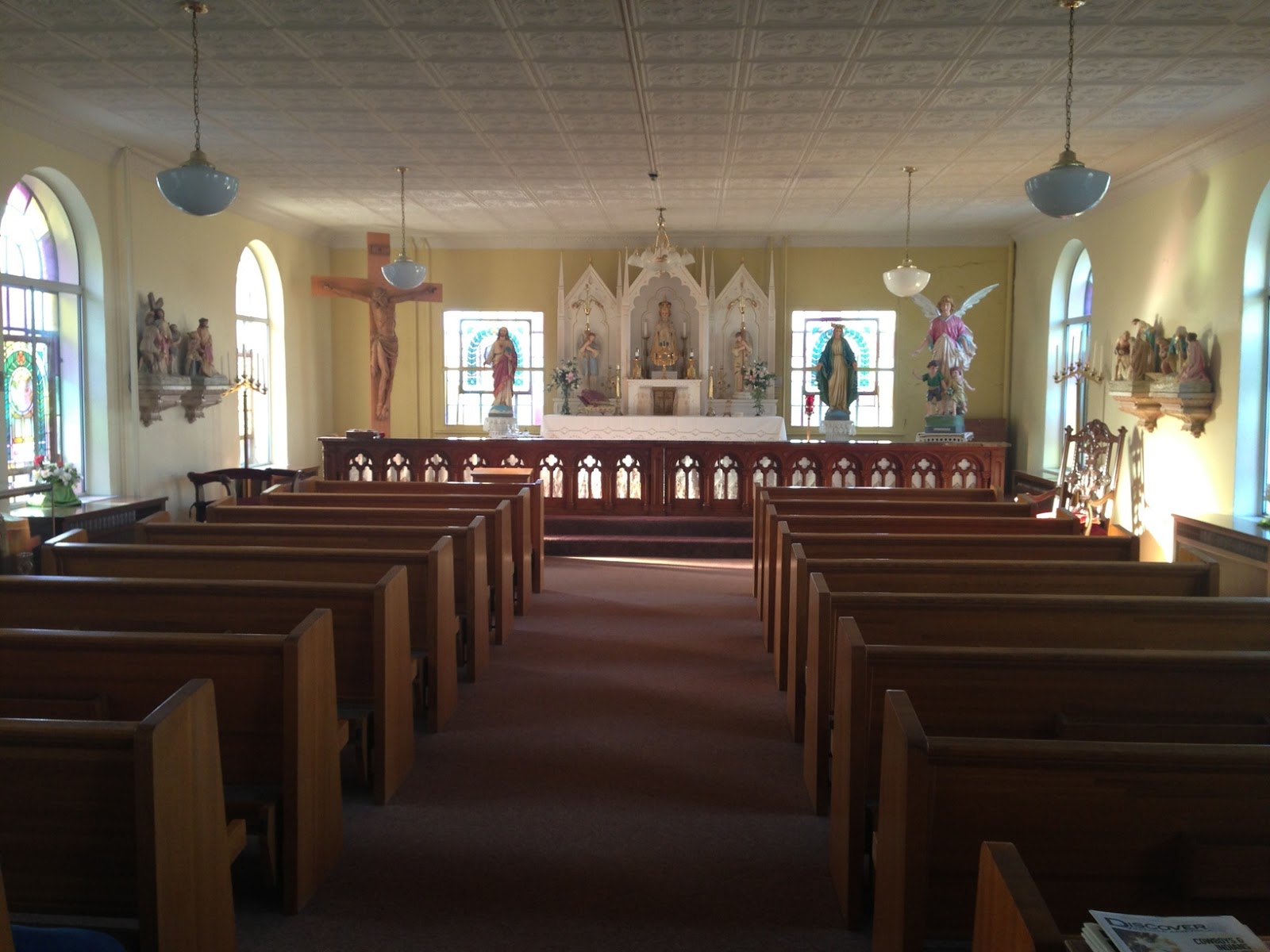 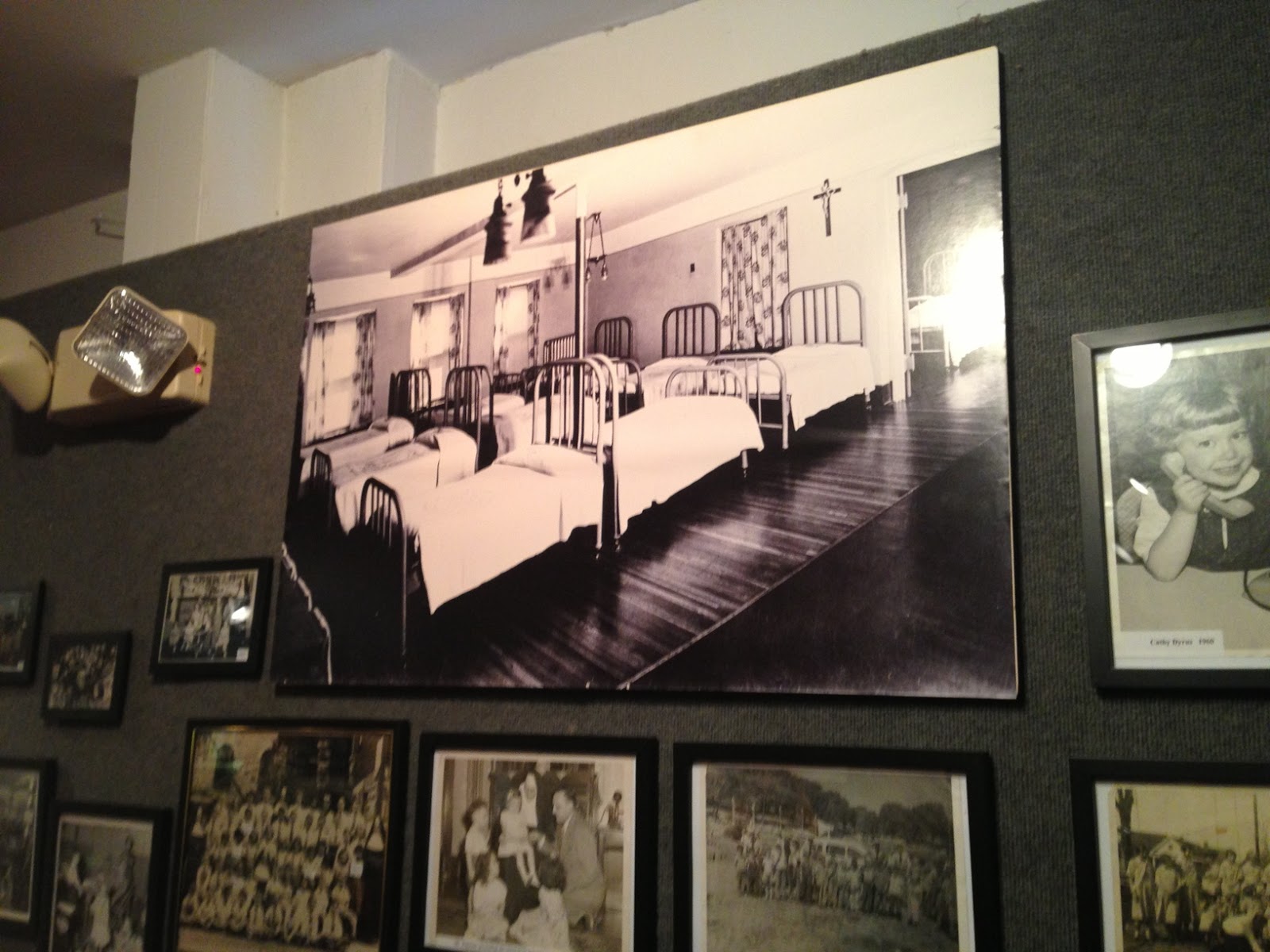 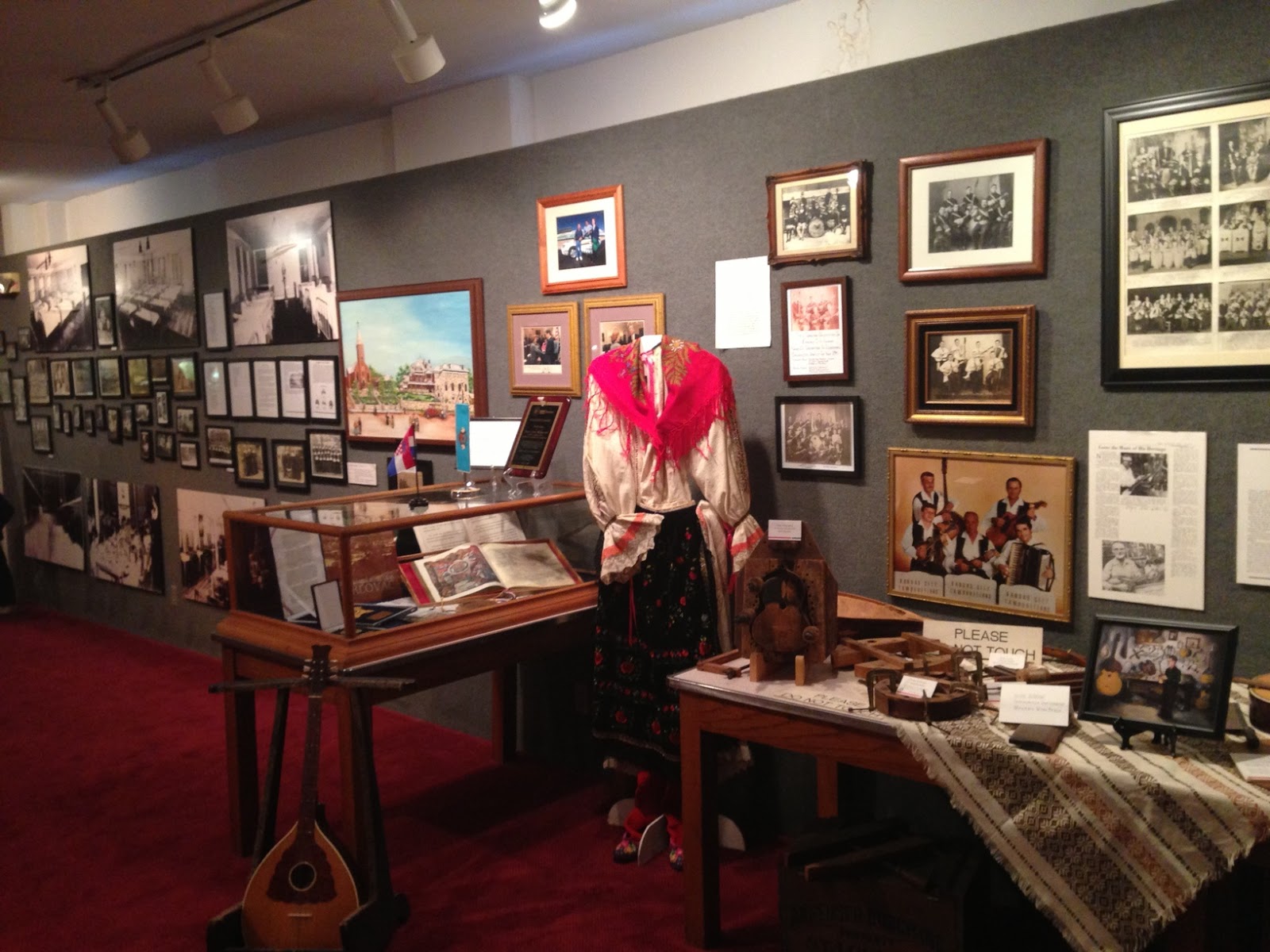 This Queen Anne Victorian home was built as an elaborate residence for the wealthy family of Margaret (Kerstetter) Cruise Scroggs. It was the first home commissioned to the young architect John G. Braecklein, who had just opened his own practice in the city. [1] The home was built on six lots, elevated high above street level with a stone retaining wall, and close to the downtown business district. It is made of brick with stone and wood trim. It has a round three-story tower on the northeast side, as well as gables and dormer windows on each side. There is a large wrap-around front porch along the front entrance. The interior is decorated with ornate woodwork, built-in shelving, tile fireplaces, pocket doors, embossed walls, and stained glass windows. [1] The mansion was completed in 1887, and Margaret lived there with her husband, John B. Scroggs, as well as her three children from a previous marriage. At the time of its completion, it was considered one of the finest examples of Victorian architecture in the city. [1]

Margaret Scroggs died in 1915, and her daughter Emma and her husband John E. McFadden lived in the home for a few years. In 1919, they sold the home for $15,400 (about one-third of its worth) in a gesture of goodwill to the St. John the Baptist Catholic Church next door. [1] The Croatian parish had been looking for place to open an orphanage for children whose parents had died during the Spanish Influenza pandemic, which had spread throughout the world in 1918-1919. The Sisters of St. Francis of Christ the King ran the orphanage as well as a day care and nursery school program out of the home. [2] There was a huge need for their service, and from 1922-1930, four additions were made to the building. These grey stone additions added a large kitchen and dining room, dormitories, bathroom, playroom, study rooms, laundry facilities, and a chapel to the orphanage operations. The nuns used the original residence as their sleeping quarters, so most of the ornate exterior and interior was left preserved over the years. [1]

In the 1930s and 1940s, the orphanage was caring for about 70 children. It received its first license from the State Board of Health in 1940. The nuns would later be trained as caseworkers. Sometime in the 1970s, the mission of the home was changed from an orphanage to a residential treatment facility. It closed permanently in 1988. By that time, St. John’s Orphanage had cared for over 3,000 children. [2]

As early as the late 1800s, within the lifetime of Margaret Scroggs, the demographic of the neighborhood surrounding the home began to change. Immigrants from many different countries, especially those from Eastern Europe, began to move to the area. The Flood of 1903 forced many to move from the lowlands along the river up to what was then known as Splitlog’s Hill, now Strawberry Hill.

When St. John’s Orphanage closed, the building was purchased by the Strawberry Hill Ethnic Cultural Society. The mission of the society was to preserve the stories and legacy of the area’s ethnic heritage. They restored the original portion of the home with furnishings to serve as a historic house museum. The additions to the home were converted into displays. Today, a Hall of Immigrants display tells the story of the many families who moved to the Strawberry Hill neighborhood. Exhibits explain the history and culture of the people who called the neighborhood home over the years through their clothing, photos, toys, and books. Holiday events featuring the traditions of the various cultures are especially popular with visitors. The cultural center also hosts other community-oriented events. The museum is open for guided tours on weekends. It also has a tea room and a large gift shop. It is available for as a venue rental. [3]

Saturday and Sunday from noon to 5 pm (last tour begins at 4:15pm)