The Chickasaw National Capitol building and the Council House next door have been registered historical places since 1971. Holding one of the world's largest collections of Chickasaw artifacts, it is dedicated to the preservation of the history of the Chickasaw Nation, which deeply values family, community, and heritage. The Capitol museum focuses on the history of the Chickasaw government, while the Council House (the first to be built in Indian Territory) holds art, artifacts, language materials and archives, and other cultural exhibits. 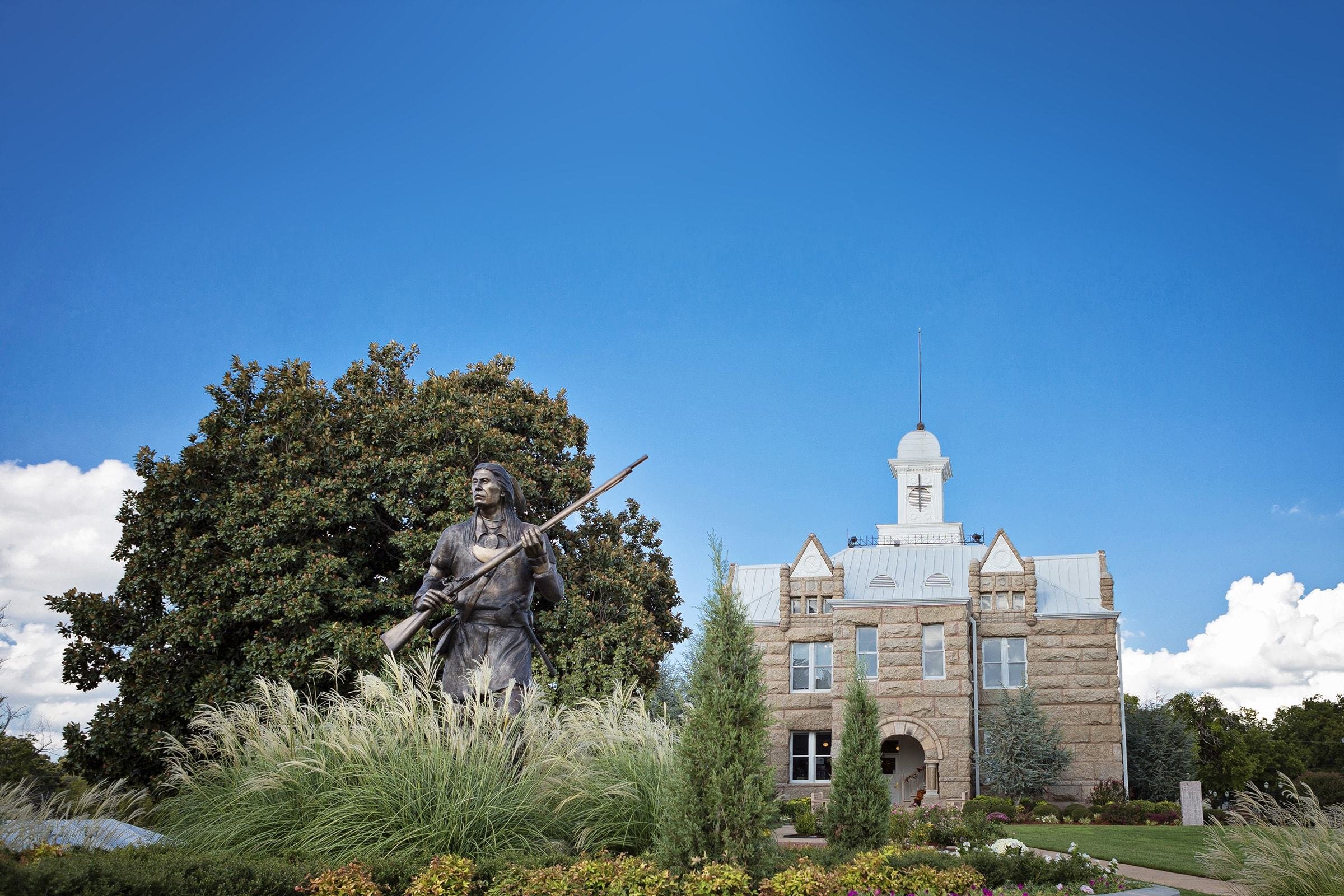 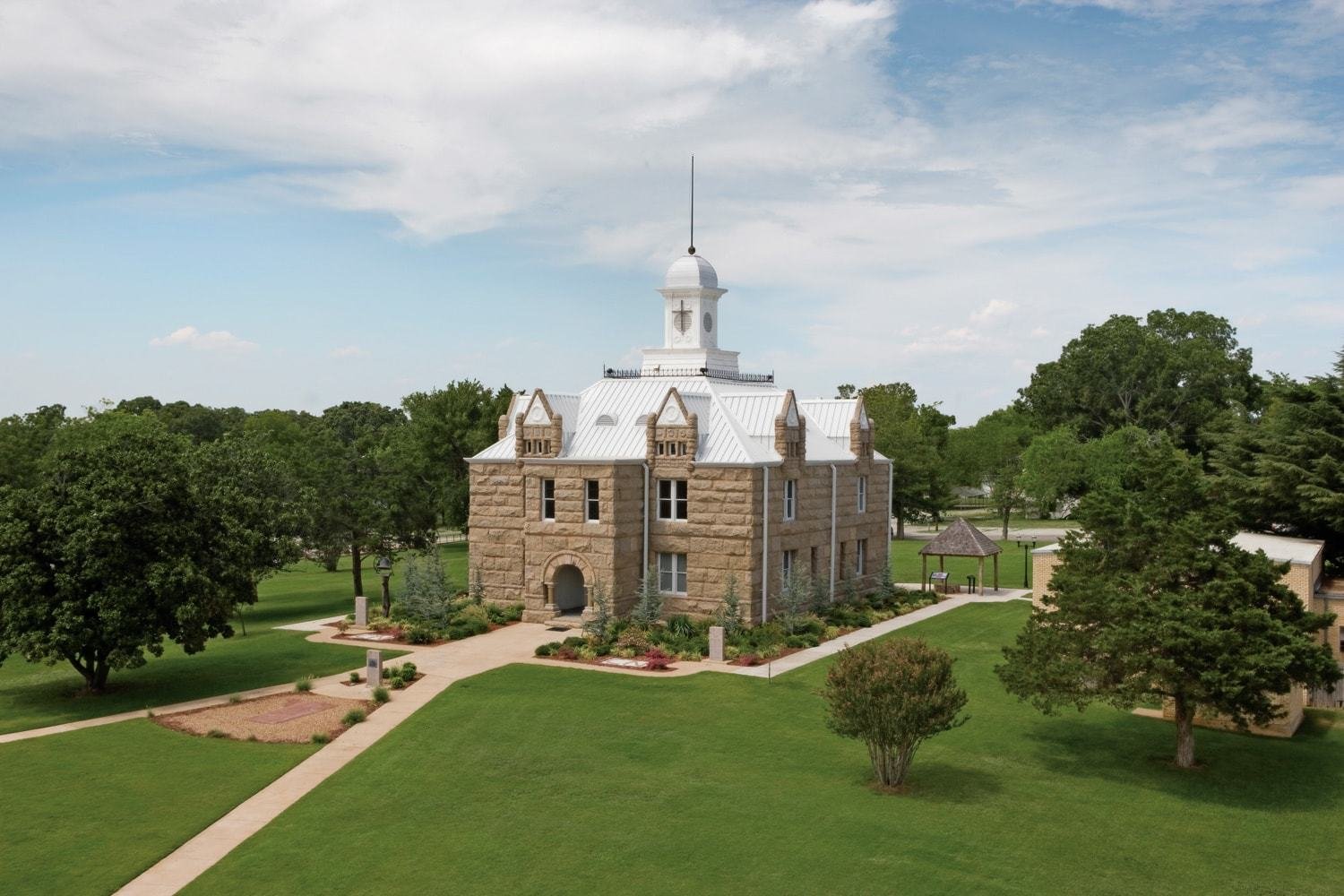 The Chickasaw - Before Europeans
The homeland of the Chickasaw people before Europeans arrived was in the lower Mississippi Valley, on lands which are today parts of Kentucky, Tennessee, Mississippi, and Alabama. Traditionally a matrilineal culture (in which a person belonged to his or her mother's clan), the Chickasaw were agrarian people who built towns on bluffs or hills above flood zones, with palisade forts for protection from invaders. A town would consist of summer and winter homes, corn cribs for food storage, a ball field for games, and a council house. Councils were made up of respected elders, both male and female. The Chickasaw language is part of the Muskogean language family, related to Choctaw, Creek, Seminole, and others. The Chickasaw supreme being and creator was referred to as Aba' Binni'li' (Sitting/Dwelling Above), later known as Inki Abu (Father Above) after Christianity was introduced. Storytelling preserved tribal and family histories, a central part of Chickasaw culture. Rivers and traces (pathways) were important as routes for transportation, trade, and fishing and hunting; the Natchez Trace Parkway today follows a route the Chickasaw people once used as part of their trade network with other Southeastern tribes [2].

From Removal to Today

As Europeans moved west, they encroached on the land of American Indians. Conflicts naturally arose, particularly when the U.S. government reneged on treaties or forced tribes into signing away their lands. In 1830, Congress passed the Indian Removal Act. Along with the Cherokee, Choctaw, Muscogee (Creek) and Seminole, the Chickasaw were forced to move from their homelands to Indian Territory (in today's Oklahoma). The Treaty of Doaksville, signed in 1837 by the Chickasaw and Choctaw Nations, set aside a district within Choctaw Territory for the Chickasaw to settle. As Indian Territory was the ancestral land of the Plains Indians, raids were frequent until the U.S. government constructed Forts Washita and Arbuckle. In 1856, the Chickasaw formed their own separate government and established a capitol at Tishomingo. Some of the first schools, banks, churches, and businesses in Indian Territory were established by the Chickasaw. The new Chickasaw government, like the U.S. government, was based on the executive, legislative, and judicial branches, with leaders elected by popular vote. Their highest executive leader became a governor rather than a chief [1; 2].

The Chickasaw Nation allied with the Confederacy during the Civil War due to the federal government's failure to honor its agreements with the tribe. After the Union's victory, the Chickasaw were stripped of a large portion of their territory. Nevertheless, the tribe had success in farming and ranching in the years following the war, eventually weakened by the Dawes Treaty of 1887, which eliminated communal land ownership in favor of individually owned farms. Government boarding schools which American Indian children were required to attend discouraged students from speaking their native languages or practicing their traditional cultures, resulting in language loss. To make matters worse, when Oklahoma became a state in 1907, tribal elections were suspended and Douglas H. Johnston was appointed governor by the United States government [2].

Through the decades which followed, the Chickasaw people sustained their culture and language by means of grassroots and social gatherings. During the Civil Rights movements of the 1960s, the Chickasaw and a number of other tribes worked toward reestablishing their own governments, and the first tribal election since 1904 was held in 1971. The Chickasaw Nation established a Constitution in 1983, and a three-branch system of government similar to that of the United States. Priorities of the Nation since that time have been support for infrastructure, economic diversification, and providing programs and services to improve quality of life [1; 2].

Monday-Friday 8am to 5pm Saturday 10am to 4pm Guided tours available Mon-Fri 8am-4:30pm.