Located across the High School in the Melba football field is original Glendale School Bell. It was in use from 1929 through 1959, beckoning children of the beginning of each school day.

Glendale school was built in1915 on ground donated by Mr. McDonough and Mr. Reineke, one acre each. The building consisted of two rooms with nine or ten pupils in attendance the first year. 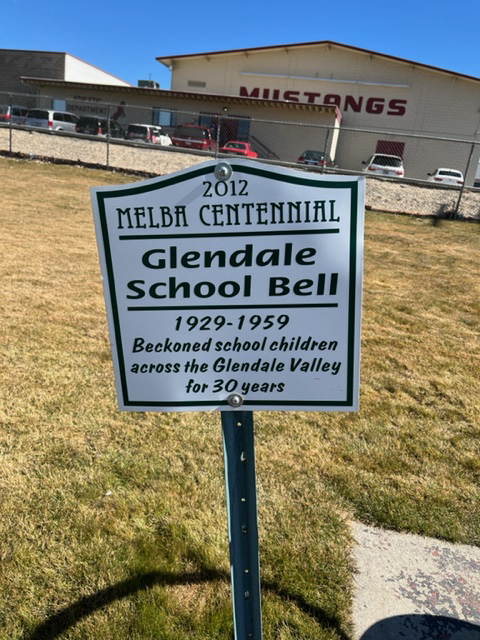 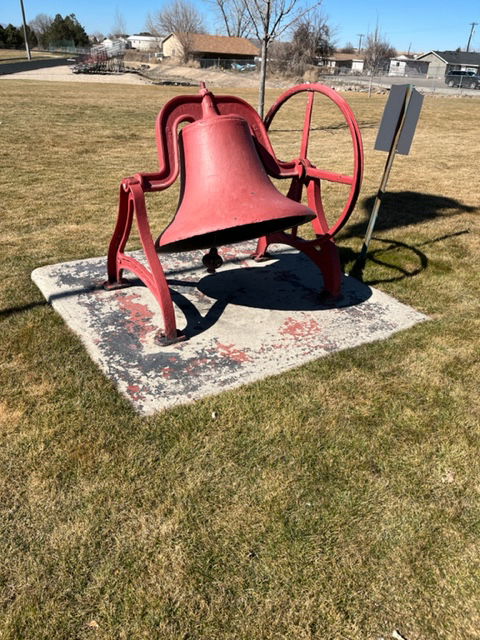 The Glendale school district was started in 1914 as it was the area first settled on this side of the river. It was an area opened to homesteading in 1909.

The first term of school began in September 1913 in the homestead shack of Robert McDonough, with Miss Nettie Hamilton Mills as the first teacher. It was a result of a petition of a man named Amos Lewellen and other presented on July 25 of that year.

The district was organized and officially designate on April 20, 1914. The first half of the brick building was constructed and completed in the fall of 1915 on ground donated by Mr. McDonough and Mr. Reineke, one acre each. The building consisted of two rooms with nine or ten pupils in attendance the first year.

Sometimes, if there were not enough eligible, five-year-old’s were sought after to fill the quota. Melba Todd, the daughter of the founder of Melba started school at the age of five. According to a taped interview with her, she said Miss Eva Duffes, the first teacher for Melba Grade School boarded with the Powells, south of the rim, and walked to school each day past the Todd place. (Across the railroad track from Conyers Store, the backside of Broadway market). Mrs. Todd asked Miss Duffes if Melba could go to school. Miss Duffes told her that she could go the next day, and if she could stand up to the rigor, she could continue. She did and Melba started in the one-room school in the fall of 1914.

In 1915 the northwest room was built complete with entry way and bell tower. A year later the southwest room was added. In 1919 the other two rooms were added and by 1921 there were 120 to 130 enrolled in the school.

Wartime in the forties took its toll on the attendance. Many people moved away to work in defense plants. Shortages of gasoline and goods made it tight situation for the operation of schools. Personnel were hard to attract to one, two or four room country schools. In 1947 the legislature started talking consolidation and in 1949, districts were ordered to consolidate. Glendale and Melba went together in 1950. Glendale was used for the four lower grades and Melba Grade School held the fifth through eighth grades. Soon after, Melmont joined in the consolidation, along with Wilson District #9 from Owhyee County. Several other schools were annexed into the Melba district including Bowmont.

In July of 1960, a portion of Owyhee County Districk #362, Murphy, joined Melba and in August of 1963 the remainder of Murphy was annexed. That included Silver City, Guffey, and Sinker Creek. The Melba District now is comprised of nearly 160 square miles, one of the largest in the state.