The Battle of Wyoming pays tribute to the hundreds of Connecticut Yankees who settled in Pennsylvania’s Wyoming Valley, and as part of the explosive, internal revolution in Pennsylvania while the country struggled to gain independence from England, over 300 Yankee militiamen savagely lost their lives. With the threat of the war spilling across Pennsylvania borders, two factions grew. One supported the idea of independence while the other sided with the redcoats. To add further complication to the struggle, the local Iroquois tribes of Western New York chose to side with the British. The monument pays tribute to the bravery of the men who fought against incredible odds in the name of independence, and it serves as a reminder that America will prevail regardless of the hardship it confronts.

The Wyoming Massacre Monument commemorates the massacre of 300 Yankee militiamen by the British and their loyalist and Iroquois allies. 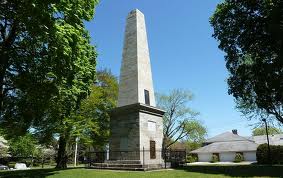 Inscription on the Monument

Depiction of the Battle of Wyoming by Alonzo Chappel, 1858 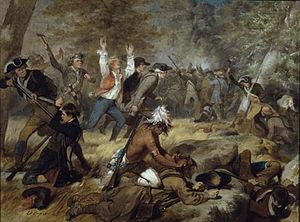 Short Overview of the Battle of Wyoming

Starting on July 1st, 1778, around 1,000 British, loyalist, and Indian troops marched into the Wyoming Valley and seized the Wintermoot and Jenkins forts near the western banks of the Susquehanna River. As British troops continued conquering Yankee forts in the area through July 2nd.

The next day, with the Yankees unable to receive support from Washington and the Continental Army, Continental Col. Zebulon Butler and 386 militiamen went to battle against this massive British, loyalist, and Iroquois forces. The battle was devastating for the Yankee forces, and by the late afternoon, Connecticut militiamen were slaughtered, tortured, slain, and in over 227 cases, scalped.

Later, George Washington would use this massacre as a tool for the patriotic cause, and with the help of Maj. Gen. John Sullivan, the Continental Army defeated the Iroquois army in 1779 and permanently secured the northern frontier from further invasion.1

Inscription on the Monument

The inscription on the front of the obelisk monument reads: "Near this spot was fought, on the afternoon of Friday, the third day of July, 1778, the Battle of Wyoming, in which a small body of patriotic Americans, chiefly the undisciplined, the youthful and the aged, spared, by inefficiency, from the distant ranks of the Republic led by Col. Zebulon Butler and Col. Nathan Denison, with a courage that deserved success, boldly met and bravely fought a combined British, Tory and Indian force, of thrice their number. Numerical superiority alone gave success to the invader, and wide-spread havoc, desolation and ruin, marked his savage and bloody footsteps through the Valley. This monument, commemorative of these events, has been erected over the bones of the slain by their descendants, and others, who gratefully appreciated the services and sacrifices of their patriotic ancestors."2

Open to the public