The most deadly mining disaster in Pennsylvania history occurred at the Avondale Colliery on September 6, 1869. Like other mining companies at that time, Avondale kept small fires burning at the bottom of coal shafts to create drafts that promoted better air circulation for the working miners. However, in 1869, sparks from the Avondale ventilating furnace set fire to the timbers in the shaft, and the flames engulfed the breaker at the surface, the only exit for those underground. The fire devoured the oxygen and collapsed the breaker into the shaft. It took two days of clearing debris and poisonous gases from the mine before rescuers reached the first victims. Some men had fallen while running, another was kneeling, and a father was found with his arm around his son. All told, the fire asphyxiated 108 men and boys and two of the men who attempted to rescue them.

"Bringing out the dead". Originally published in the September 25, 1869 issue of Harper's Weekly 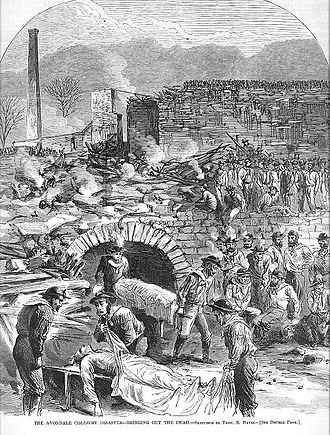 Originally published in the September 25, 1869 issue of Harper's Weekly

The Avondale Mine Disaster traces back to America's relentless love for coal, and throughout the 1800s, economic progress by way of the American industrial revolution was fueled by coal. At its center, Northeastern Pennsylvania had the largest anthracite (hard coal) deposits in the Western Hemisphere. Standard extraction procedures at the time required tens of thousands of miners, who poured into the region from the British Isles and, later, Western and Eastern Europe.

Source material reflects the incredibly violent nature of coal mining, and events such as the Avondale disaster were bound to happen. Despite law enforcement aimed at coal operators in 1868 and subsequent safety legislation in 1869, these laws were rarely enforced. The rate of death was about 5 per 1,000 workers, and between 1869 and 1900, over 10,000 workers died and 24,500 were injured in Pennsylvania's anthracite district.

During the cold morning hours of September 6th, 1869, around 108 men were at work in the Avondale Mine. A sudden rush of fire from the furnace at the bottom of the 200-foot shaft burst upwards, sounding like an explosion and causing a breaker to catch fire, and Avondale engineer Alexander Weir blew the emergency whistle.

The workers within the shaft did their best to escape the flumes of flame erupting upwards, and those who escape the fire succumbed to carbon dioxide as the fire ate all of the oxygen. Throughout the week, rescue attempts proved unfruitful, and after ventilating the shafts to reduce the overwhelming presence of the deadly Blackdamp, rescuers recovered 110 deceased bodies.