The Oakland Museum of California is the largest museum of its kind in California, that is, a museum dedicated to the art, history, and natural environment of the Golden State. The Museum contains more than 1.8 million artifacts, a vibrant nature sounds library, and the Dorothea Lange archive, among many other collections of California natural history and culture. The museum was designed by architects Roche Dinkeloo and Associates, and opened its doors in 1969. It boasts a unique modernist open air terrace design that incorporates formal gardens created by Dan Kiley and Geraldine Knight-Scott. The museum was renovated and expanded by Mark Cavagnero Associates between 2009 and 2013 to better serve Californians with cutting edge interactive galleries and exhibits.

A view of the Oakland Museum of California. 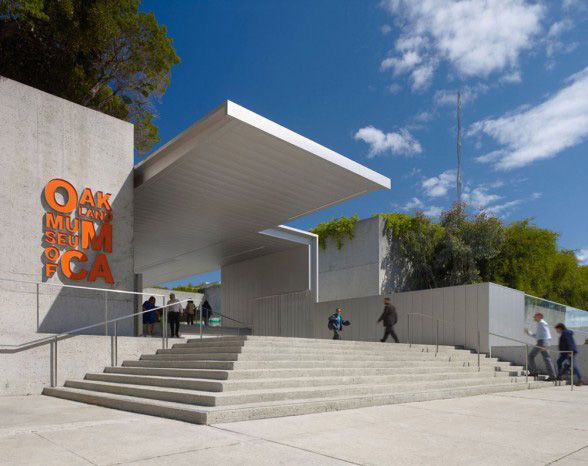 The Oakland Museum of California began as three separate museums: The Oakland Public Museum, formerly housed in Camron-Stanford House, The Oakland Art Gallery, which moved on from the Municipal Auditorium, and the Snow Museum of Natural History, which began its life in the Cutting Mansion on Lake Merritt. Since 1969, the collections of these museums as well as ongoing acquisitions and planned giving have formed the core of the Oakland Museum's collections. Collecting the art, history, and natural history of California remain an important aspect of the museum's mission to educate and inspire Californians.

The Oakland Museum's triadic beginnings can still be found in its layout. The art department inhabits the top terrace. Here, you will find exhibits displaying the history of California art as well as contemporary galleries highlighting the work of emerging and established California artists. The astonishing versatility of the Oakland Museum's art department can be highlighted by the Hot Rods and Customs show of 1996, which saw California customs roll into the art galleries for an exhibit of cars-as-art. In addition to once having driven cars into its galleries, the art department has shown everything from recycled objects to contemporary painting to California turned wood sculpture.

On the central tier of the Oakland Museum are the history galleries, featuring California artifacts and an interactive history of California geared towards the museum's educational mission. The collections in these galleries are particularly strong when it comes to the region's gold rush history, artifacts from Asia and the Pacific, documentary photography, and Native Californian artifacts such as hand-woven baskets, pottery, jewelry, and weaving. The California Indian collection also includes exhibits and artifacts related to cultural celebrations and dance.

The lower tier of the Oakland Museum houses the natural science exhibits, which interface nicely with the open terraced gardens and the koi pond. These galleries offer displays about Oakland, the Sutter Buttes, Mount Shasta, Yosemite, Cordell Bank National Marine Sanctuary, the Tehachapis, and the Coachella Valley, as well as changing exhibits on everything from bees to natural science illustration. The jewel of the museum's science collection is the California Library of Nature Sounds, which collects and distributes nature sounds widely to everyone from hobbyists to academics to filmmakers. You can experience a virtual tour of California's nature sounds by clicking on one of the links below.

The Oakland Museum has always embraced a grassroots approach, reaching out to Californians through an array of special events, including the annual Days of the Dead Community Celebration, arts and crafts sales, and events with community partners.

From 5–9 pm every Friday night, the Museum has special programming, food trucks, and 1/2 off admission.

About the Museum. Oakland Museum of California. Accessed December 20, 2016. http://www.museumca.org/.