One of the oldest buildings in the city, this structure was built in 1852 by Nicholas Larco, a prominent member of the city's early Italian community. The building also held a store that offered fine imported wine--a popular item for many of the wealthy residents of the city. The building served as the headquarters of the Italian Benevolent Society, a fraternal organization for Italian immigrants that provided a space for social interaction, cultural preservation, and economic assistance for newcomers and widows of members. The building later became the headquarters of La Parola, an Italian weekly newspaper. At various times in the 19th century, the foreign consulates for Chile, Spain, and France were all headquartered in this building. The famous chocolate maker Domingo Ghirardelli also used the building for several years before starting his own factory across the street in 1853.

Domingo Ghirardelli used this building before starting his chocolate factory. It was also home to three foreign consulates. 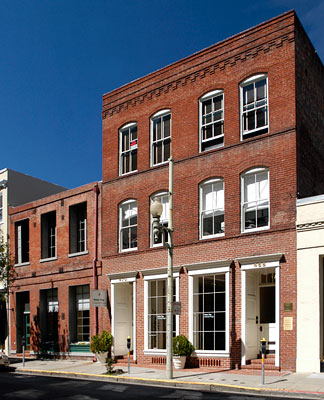 The Solari Building was constructed in 1852 by prominent merchant and leader of San Francisco's Italian colony, Nicholas Larco, who occupied the building himself for 25 years.

During the middle of the 1850s Larco was the chairman of the Sardinian Committee to celebrate the Allied victories over Russia at Sebastopol during the Crimean War. In 1863, he was president of the Italian Benevolent Society, which had its offices here at varying times during the 1860s.

The consulates of three nations have been housed at this location. In 1856 Larco for consul Chile, and at the same time Camilo Martin, consul for Spain, and De Gazette, consul for France, used the building and offices.

Grellet and Company, French importers of wines and liquors, occupied the building in the late 1850s. In 1869, liquor merchants Favre and Joussaud moved into the building and remained there until 1878.

Occupancy of the building after 1905 is not well documented.