The Hirshhorn Museum and Sculpture Garden is a modern art museum that opened in 1974 and was established by an Act of Congress in 1966. With an indoor space of 60,000 square feet to house exhibitions and almost four acres making up its two-level sculpture garden, it is one of the nation’s largest modern art museums. The site where it was built was originally the Army Medical Museum and Library. The idea for an art museum on the National Mall began as early as the thirties, but the project was postponed due to the Second World War. It is named for entrepreneur and financier Joseph H. Hirshhorn, who donated his priceless art collections to the Smithsonian.

The Hirshhorn Museum signaled a new era of modern architecture on the National Mall. 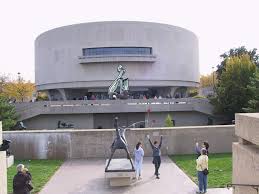 The museum, designed by Gordon Bunshaft, is curved to expand the space and make it easy to meander through galleries. 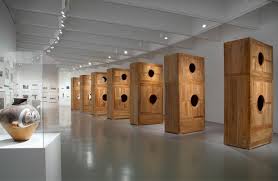 Plans for a modern art museum on the National Mall dates back to 1938, when Congress provided Smithsonian Institution with funds to create a museum and select a site. It followed the National Gallery of Art, funded a year prior by Andrew Mellon. However, the modern art museum project received no such benefactor until 1964, when Joseph H. Hirshhorn agreed to donate his collection to the Smithsonian. Hirshhorn was an entrepreneur and financier who made a great deal of money from investing in uranium mining. Hirshhorn’s amassed a prolific collection of modern and contemporary art, considered the largest private collection at the time. He obtained a dynamic and varied collection that included works of the French Impressionism movement, American Modernism, and various types of sculpture. The Smithsonian’s acquisition of Hirshhorn’s collection was part of broader expansions and educational initiatives undertaken by S. Dillon Ripley, Secretary of the Smithsonian Institution from 1964 to 1984. With the support of President Lyndon B. Johnson and First Lady Lady Bird Johnson, the gift was officially accepted in May 1966 and the museum established by an act of Congress in November.

By the mid-twentieth century, the National Mall contained most of the museums standing today. Planning involved careful consideration for the National Mall’s past and future, including architectural styles, the logistics of traffic, and views of iconic sites like the United States Capitol and Washington Monument. Because the 1938 act that stipulated the modern art museum be situated on the National Mall, Secretary Ripley and Hirshhorn considered a variety of sites, including at the Smithsonian Arts and Industries Building and near the National Archives. Hirshhorn, however, sought a larger space where a more memorable structure could be built to house his legacy. They selected a site contained the Army Medical Museum, built in the 1880s by the War Department to house the Office of the Surgeon General’s museum, library, and archive. Debates ensued between the Smithsonian and other government agencies, including the Department of Defense (which supported the plan), the National Park Service (which designated the building a historic landmark), and Armed Forces Institute of Pathology (which operated the museum). They grappled old and competing visions for the National Mall. Because the collections, rather than the building itself, was deemed more historically significant, the Smithsonian received congressional approval to build on this site. The Army Medial Museum was demolished in 1969 and collections moved to Walter Reed Medical Center.

The Smithsonian hired Gordon Bunshaft of Skidmore, Owings and Merrill to design what he considered “a piece of sculpture on the Mall.” He created a massive cylindrical structure raised fourteen feet off the ground on concrete piers with an interior courtyard and fountain. In contrast to the museum’s imposing concrete, the sculpture garden provided open air galleries and artistic greenery. Furthermore, the Hirshhorn Museum design solidified the National Mall’s shift from Neoclassical structures like the National Museum of Natural History to modern architectural styles found in the National Museum of American History and National Air and Space Museum. Some art critics appreciated the round design, which created flow and softness, while others felt it was unimpressive, raising questions about how much a museum building should embody its collections. Construction began in 1969 and the museum opened in 1974.

Symbolically, however, the museum represents the success of immigrants in America. Hirshhorn emigrated from Latvia when he was six years old. During the inauguration of the museum, Hirshhorn said, “It is an honor to have given my art collection to the people of the United States as a small repayment for what this nation has done for me and others like me who arrived here as immigrants. What I accomplished in the United States I could not have accomplished anywhere else in the world.”

The Hirshhorn Museum welcomed a million visitors in its first six months. Since then, the Hirshhorn has transformed and adapted over the years, keeping up with the times and consistently providing its patrons with fresh exhibits and the latest artists and projects of the modern-art world. The museum has grown its exhibition spaces to incorporate more immersive experiences. New acquisitions include Yoko Ono’s “Wish Tree for Washington DC,” a permanent piece that has been in the Sculpture Garden since 2007. This piece was installed as part of her Imagine Peace billboard project. Since 2007, the Hirshhorn has hosted After Hours parties three times per year. In 2009, the museum’s After Hours initiative began collaborating with the Pink Line Project, which promotes creativity in the Washington DC area. One of their main missions is to get both visitors to and residents of the DC area to see it as a creative hub as well as a center for institutions and politics. In 2010, the Hirshhorn created ARTLAB+, a digital arts studio that offers free after-school programs for teenagers. The Sculpture Garden was renovated in the 1990s and usually exhibits about fifty pieces at a time, which are moved or replaced four to five times per year.

Human and Natural Landscapes of the Capital Region

History tours usually tell stories through buildings and human-made structures, but landscapes also tell important stories about the past. These gardens, conservatories, and horticultural sites represent the impact of human beings in shaping cultural landscapes. This tour explores the greater capital region; to stay within Washington, DC city limits, visit #2 and #5-9.