The Battle of Spanish Fort, part of the Union Army's campaign to take the city of Mobile, Alabama, was fought from March 27- April 8, 1865. Prior to this battle Mobile was in Confederate control, although the Battle of Mobile Bay had been a Union victory. In late March, Union forces planned to take the city by advancing along the eat shore of the bay, lead by Major General E.R.S. Canby. This move forced the Confederates back to defend their position at Spanish Fort and also Fort Blakeley.

Map of the Mobile Campaign 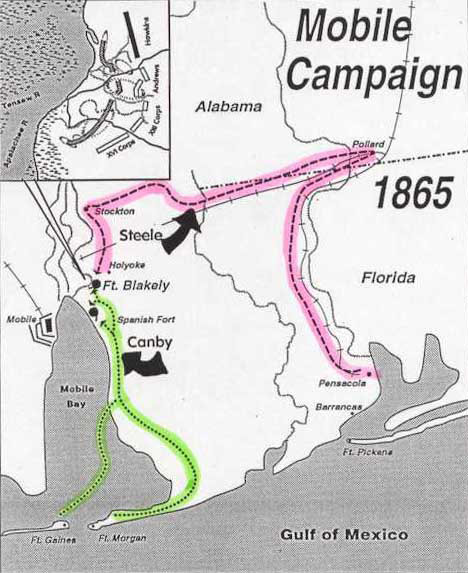 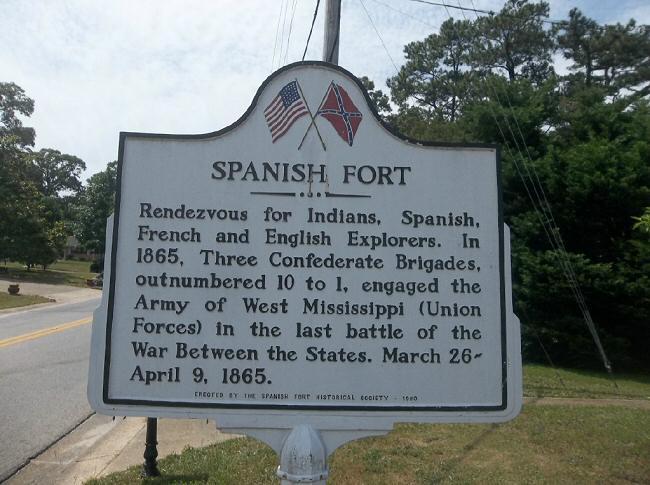 In 1865, Spanish Fort was situated across Mobile Bay in Alabama. It had been named after an American Revolution fort built at the same spot by the Spanish troops serving under General Bernardo de Galvez. A Revolutionary War battle had taken place at the fort in 1781, when British troops, advancing from Pensacola, unsuccessfully attempted to take the fort and drive the Spanish out. During the Civil War, Spanish Fort was used as a part of the Confederate defense system of Mobile Bay and the city of Mobile. The Union army knew that the only way to take the city would be to conquer the southerners at Spanish Fort first.

On March 27, 1865, Union forces came together to lay siege to Spanish Fort and the Confederates defending it with only a couple thousand men. The attacking Union army on the other hand, out-numbered the Confederates with a group 15 times their size.  The siege continued for days, with Union troops circling the fort on land, placing cannons ready to fire at the southern army. On April 8, 1865, Union soldiers let loose with their attack on Spanish Fort.  Major General Canby bombarded the men inside the fort with 90 cannon, while the Confederates responded with only 47, some of which were not aimed at the Union troops, but instead at the bay. Back and forth, throughout the day, the ground shook and the air filled with smoke, until late afternoon when the Union army's 8th Iowa Infantry finally got past Confederate defenses at the north end of the field.

Knowing that his army had had as much as they could take, Brigadier General Randall Gibson took his southern army and left Spanish Fort for Fort Huger.  The taking of Spanish Fort allowed the Union army to enter Mobile peacefully a few days later, on April 12, 1865.  On April 9, 1865, the day after the fall of Spanish Fort, General Lee surrendered in Virginia, and the Civil War was over.  Today, the battlefield at Spanish Fort has been developed into subdivisions, however evidence of the battle and the fort can still be seen in the earthworks and trenches that dot homeowner's yards.